COP 21 Not a Silver Bullet on Climate Change 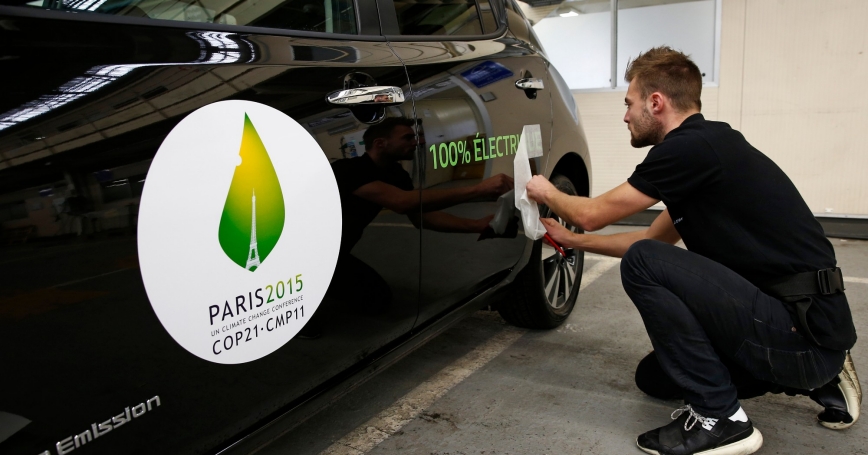 A man applies a sticker which reads 100% electric next to the logo of the upcoming COP21 Climate Change Conference on a Nissan LEAF electric car in Boulogne-Billancourt, France, November 16, 2015

Many people see the United Nations' sponsored negotiations beginning in Paris this Friday as the last, best hope of preserving the Earth's climate as we have known it. If the world's nations cannot agree to legally binding commitments to dramatic reductions in greenhouse gas emissions, many believe, humanity will enter a period of unstable climate conditions unseen since civilization began over 10,000 years ago. While the dangers are real, this expectation fundamentally miscasts the role of these negotiations. The Paris climate conference cannot provide the engine that will drive a solution to the world's climate change challenge. Rather, it can best serve as a mediator that will help guide and structure the swirling, bottom-up process of radical change that is the best hope of preserving Earth's climate.

The negotiations, involving all the world's nations, is the 21st such gathering organized under the rubric of the 1992 Framework Convention on Climate Change. The Framework Convention, ratified by 196 nations including the United States, pledges signatories to preventing dangerous human interference with the Earth's climate. Since that pledge, the concentration of heat-trapping greenhouse gases in the atmosphere has risen by 10 percent and the Earth's climate has noticeably begun to change, with rising seas, more days with extreme heat, and more intense storms. Worse, like a teakettle that takes a long while to boil, the Earth's oceans impose a decades-long lag between emissions and their full effect. Even if all emissions ceased today (an impossible feat), the world's climate would continue to change.

The Paris negotiations cannot provide the engine that will drive down global emissions because the needed changes are too large. Since greenhouse gas emissions remain in the atmosphere for centuries, stabilizing concentrations requires driving emissions to zero over the course of this century. Since emissions emanate from most human activities, reducing them to zero will require a radical transformation of the energy, transportation, buildings, manufacturing, agricultural, and other sectors of the global economy. The Framework Convention operates by consensus. There is no precedent, nor any political science theory, to suggest that the world's nations will unanimously agree on a comprehensive, detailed plan for radical change that none of them knows with certainty how to achieve.

If Paris is not the engine, what is? Halting climate change will likely require innovation driven at a more local, not global, level — a bottom up process of experimentation and change in technology, governance, and norms. Significant progress is occurring in all these areas. For instance, on the technology front, the cost of energy from renewable sources such as wind and photovoltaic has dropped by more than half over the last decade and now provides over 40 percent of the electric power in Denmark and 10 percent in Germany. Electric cars are now on the market. The potential for distributed generation and “smart” grids now have electric utilities searching for new business models. On the governance front, a significant percentage of the world's economic production — from China to California — now resides in jurisdictions with a price on carbon emissions. Near universal agreement exists among economists that such price signals represent one of the most effective means to reduce carbon pollution. In addition, many jurisdictions have begun to take initial steps towards some future global carbon pricing system by linking their local efforts, such as has been done over most of the west coast of North America by California, Oregon, Washington, and British Columbia. On the evolution of norms, advocacy groups such as 350.org have caused many citizens to consider whether burning fossil fuels, the foundation of virtually all economic growth since the beginning of the industrial revolution, remains an ethical option going forward.

Given this flurry of activity, why do so many people nonetheless see the Paris negotiations as the engine that will drive global progress on climate change? Among the contributing reasons may be the “silver bullet” fallacy — the often-observed hope that there exists a single best response to a sprawling, complex problem. In addition, people often seek reassurance in an illusion of control, believing that some individual or organization can take primarily responsibility for some scary risk and guarantee to prevent it. Finally, it seems reasonable to many that a collective problem — unlike more localized pollution, greenhouse gas emissions anywhere in the world affect your climate — requires a collective solution to which everyone agrees.

Envisioning the Paris negotiations as the primary engine of climate progress presents real dangers. It could lead to disappointment when the negotiators can't deliver what is expected. Most notably, in previous meetings under the Framework Convention the world's governments have pledged to cut emissions sufficiently to hold the increase in global temperatures to less than 2°C. Most observers conclude that the pledges that emerge from Paris will in no way ensure meeting that goal.

Unmet expectations that Paris can provide the primary driver of change distract attention from what such negotiations can actually achieve. As one example, given the scale of the needed changes, most experts believe that the world's governments are underinvesting in energy R&D by a factor of two or three. But since they are expected to provide a solution, the negotiations nonetheless focus on outcomes — promised emission levels decades in the future — over which today's governments have little direct control. The negotiations have largely ignored concrete actions — such as today's research investments — that would make low future emissions (while not guaranteed) much more likely.

While not the primary driver of change, the Paris negotiations are nonetheless vital. They can establish standards for judging national climate change efforts (e.g. expanded technology research, some type of carbon price, elimination of subsidies for fossil fuel production, etc.). They can promote transparency so the governments and citizens can know and compare what each nation is doing. They can create public pressure for governments to act. And they can promote equity by giving voice to the many poorer countries that have contributed much less to the current problem and yet will suffer more from climate change than richer giants like the United States, China, and Europe. In addition, the Paris negotiations could begin discussions of ways — ranging from product standards and labeling to trade sanctions — that leaders in the efforts to reduce emissions could use in the future to penalize those who lag too far behind.

It will always remain tempting to seek a silver bullet to slay climate change, or imagine that some global agreement can tame what promises to be a tumultuous period of change as society seeks to transform the pillars of its economy quickly enough to out pace a de-stabilizing climate. The Paris negotiations should provide some structure and encouragement to what needs to be an unruly process of experimentation and bottom-up change. Adjusting expectations will make it more likely that the negotiations can play their necessary and appropriate role.

Robert Lempert is a senior scientist at the nonprofit, nonpartisan RAND Corporation and director of the Frederick S. Pardee Center for Longer Range Global Policy and the Future Human Condition.