Flirting with Genocide in Burundi: Paying Attention Could Save Lives 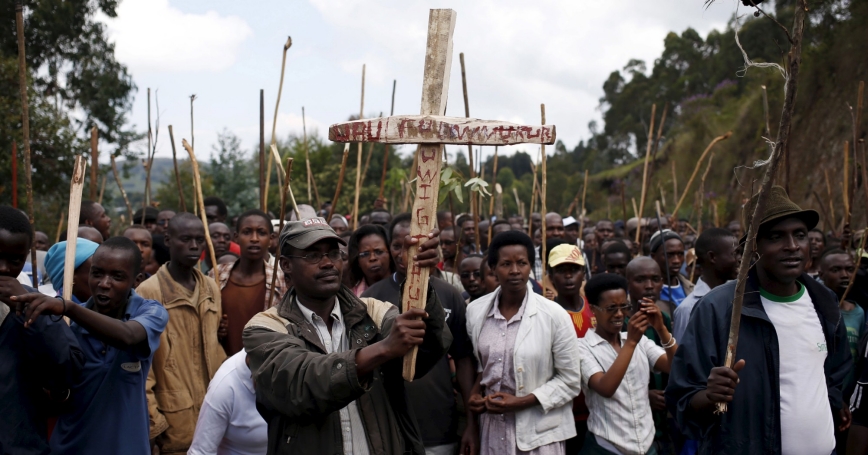 A man holds a cross that reads "death to the president" in a protest against Burundi President Pierre Nkurunziza and his bid for a third term, June 3, 2015

Burundi has been afflicted by political violence since April, when its president, Pierre Nkurunziza, began his bid to extend his mandate to a third term despite the constitution's two-term limit. In July, he got himself re-elected in an election that Secretary of State John Kerry described as “deeply flawed.” Protests against his regime have not abated, while government-directed violence against opposition members has increased.

What makes all this so alarming for the international community is the potential for far worse: Burundi shares with its neighbor Rwanda a population split between the Tutsi and Hutu ethnic groups associated with the genocide in Rwanda in 1994. Everyone is familiar with what happened in Rwanda, but the ethnic violence in Burundi in the 1990s and the first years of the 2000s was “better” only in relative terms: An estimated 800,000 souls perished in Rwanda in 1994; an estimated 300,000 died in Burundi's civil war between 1993 and 2005, and before that conflict, thousands were killed in ethnic violence that has punctuated the former Belgian colony's history since it became independent in 1962.

Now, Nkurunziza, who helped bring peace to Burundi in the last decade, is risking everything for the sake of staying in power, namely by stirring up old tensions and reviving extremist rhetoric in a bid to purge dissent. He is, quite simply, playing with fire.

It seems unlikely that Nkurunziza intends to spark a genocide—this is important because a real genocide such as what took place in Rwanda requires planning and organization. Still, large-scale atrocities and human rights violations are more than plausible. In any case, Nkurunziza clearly is dragging the country backwards after 10 years of halting but real progress.

The UN resolution, which does little more than deplore the turn of events and call for options to foster dialogue between Burundi's government and the opposition, will not suffice so long as Nkurunziza is intent on his whatever-it-takes approach to staying in power and silencing dissent. Talk of deploying international peacekeepers raises more questions than it answers regarding precisely who would go, how, and with what purpose beyond a vague mandate to protect the population—something that international peacekeepers historically have done poorly if locals are intent on doing one another harm.

The impotence of UN forces present in Rwanda in 1994 is well known. An alternative model is the French intervention in the Central African Republic (CAR) in December 2013, which reinforced a beleaguered multinational peacekeeping operation and brought to it real muscle. In Burundi's case, however, the odds that France or anyone else would provide that kind of force in Burundi are slim to none.

One reason is that CAR in late 2013 was a failed state, while Burundi has an effective—if irresponsible—government. There is no appetite for pushing aside a sovereign state. Another is that France simply lacks the strength for another intervention, and the idea of a U.S. intervention is implausible. Some of Burundi's neighbors could do it (Rwanda above all), but they are all too implicated already in Burundi's problems to do anything more than enrage one side or another.

There are only two realistic options: Keeping up as much diplomatic pressure on Nkurunziza as possible, while also bearing witness to make as clear as possible to Burundi's leaders that the world is watching. Paying attention to this one small African country just might save lives.

This commentary originally appeared on Newsweek on November 18, 2015. Commentary gives RAND researchers a platform to convey insights based on their professional expertise and often on their peer-reviewed research and analysis.