Gun Violence: Where Is the Research That Might Save Lives? 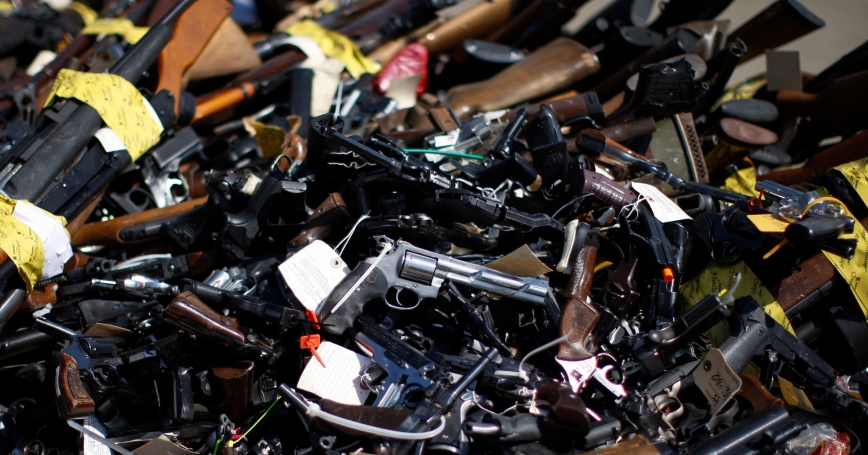 Over 5,000 weapons confiscated from criminals in Los Angeles County and collected through a gun buyback program were melted and reformed as steel, July 2013

In almost every case, we are able to draw on a trove of comprehensive scientific literature describing the impact of various approaches to reducing injury, disease burden and deaths associated with such issues as tobacco use, automobile safety and infectious disease outbreaks.

This research has, in turn, often led to effective public policies and private-sector initiatives that resulted in public health improvements.

More Americans have been killed by guns since 1968 than have died in all the wars in U.S. history, President Obama said months after the 2012 shootings at Sandy Hook Elementary that killed 26.

Despite the carnage, valid and reliable data about many aspects of the gun violence problem are lacking. For example, no one can say with confidence how many guns are actually in circulation in the United States (although most estimates cluster around the 250 million to 300 million range). Still less is known about the effectiveness of alternative policies for reducing gun violence.

What are some of the lessons learned from other countries' efforts to reduce gun violence, and how applicable might they be here? And how can new technology be better harnessed to improve gun safety?

So why the disconnect? Gun violence kills as many people in the United States as automobiles do. While there is a rich history of safety-related automobile research that led to the development of seat belts, airbags, sophisticated crash avoidance systems and much more, why isn't the country searching for ways to reduce the health and safety toll of guns?

One important reason is that the government agency tasked with protecting public health, the Centers for Disease Control and Prevention, has not funded any gun-related research since 1996, when Congress stripped the agency of funding for any such research that could be associated with gun control advocacy.

This seemingly narrow constraint turned out to have a chilling effect on the agency's behavior since then. Because the CDC is such an important funding source for public health research, the lack of CDC funding has likely deterred researchers from focusing their efforts on gun violence, which of course only compounds the problem.

The sheer complexity of the gun issue—even without adding in the ever-mounting death toll attributed to firearms—demands more research, not less.

We need creative approaches that can minimize injuries and deaths while navigating the challenging space between the preferences of gun owners and gun control advocates. In light of their track record in other public health domains, public health researchers and others can make a difference in this regard, if given adequate resources.

On the other hand, the near complete polarization in Washington makes it unlikely that the CDC will resume funding gun-related research any time soon despite President Obama ordering the CDC more than two years ago to return to studying “the causes of gun violence.”

Instead, researchers must call upon other sources of funding—foundations dedicated to improving public health, as well as private-sector firms and organizations—to support the science needed to discover promising paths forward.

Society understandably fears the prospects of another mass shooting. However, there is nothing to fear by having the research community shed light on the gun violence problem and give policymakers the intellectual ammunition needed to craft rational gun policy.

This commentary originally appeared on Newsweek on November 5, 2015. Commentary gives RAND researchers a platform to convey insights based on their professional expertise and often on their peer-reviewed research and analysis.