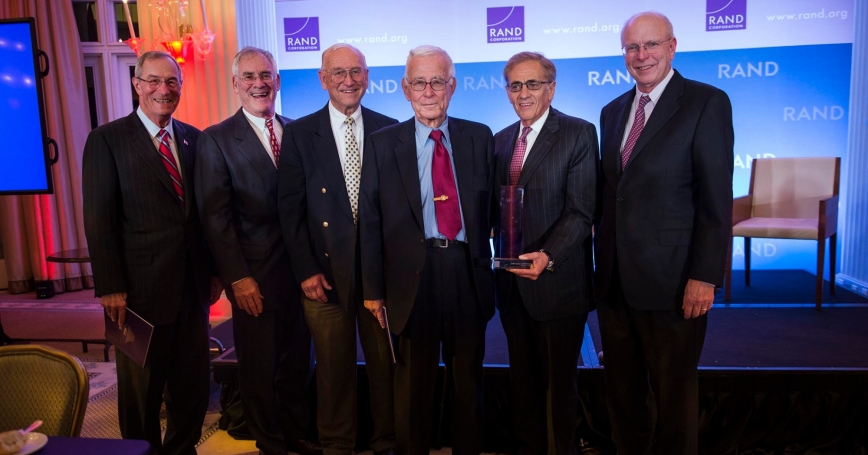 Harold Brown, the former U.S. Secretary of Defense, president of the California Institute of Technology, director of the Lawrence Livermore National Laboratory, and RAND trustee, and his wife, Colene, have made a gift to establish the Harold and Colene Brown Faculty Chair at the Pardee RAND Graduate School.

The Chair will enable exceptional RAND researchers and faculty to be in residence at the school each year, allowing them to work on independent research and provide mentorship and guidance to students.

RAND President and CEO Michael Rich announced the gift on Veterans Day at One Night with RAND: Set Politics Aside and Join the Conversation, a fundraising event with leaders in business, philanthropy, government, academia, and media discussing America's role in the world.

The event featured a salute to Brown and his career, which includes a 60-year affiliation with RAND first as a client, and then as a trustee and a philanthropist. Many of Brown's friends and colleagues contributed gifts to RAND in his honor. The lead donor for the tribute was Warburg Pincus, where Brown served as a managing director and senior advisor. Committee members included President Jimmy Carter, former National Security Advisor Zbigniew Brzezinski, former Secretary of the Navy Richard Danzig, former Undersecretary of Defense Paul Kaminski, former Secretary of Defense William Perry, former Secretary of the Air Force and former president of RAND Donald Rice, and former president of RAND James Thomson.

In announcing the gift, Rich said: “Harold has been critical to the growth of our graduate school. This Chair will rotate between RAND researchers to allow them to be in residence at Pardee RAND, providing student mentorship while infusing innovative thinking that will inspire students to take on the most complex policy problems.”

Brown and his wife have already established a faculty fellowship, allowing RAND researchers to work with students on critical policy issues.

“With this additional gift,” said Susan Marquis, dean of the graduate school, “we will be able to provide substantial and transformative support to Pardee RAND faculty, significantly bringing together the intellectual and academic freedom offered by the school with the vast talent and critical mission of RAND.”

Elaborating on why he has invested in Pardee RAND, Brown said: “RAND has for nearly seven decades been the gold standard in public policy research and analysis. The Pardee RAND Graduate School has rapidly achieved a similar status among graduate schools that educate the next generation of policy analysts and produce academic research. Colene and I are delighted to enable the School to use the skills and experience of RAND researchers more flexibly in the School's educational process.”

Pardee RAND is the largest public policy Ph.D. program in the United States and the only program based at an independent public policy research organization—the RAND Corporation.