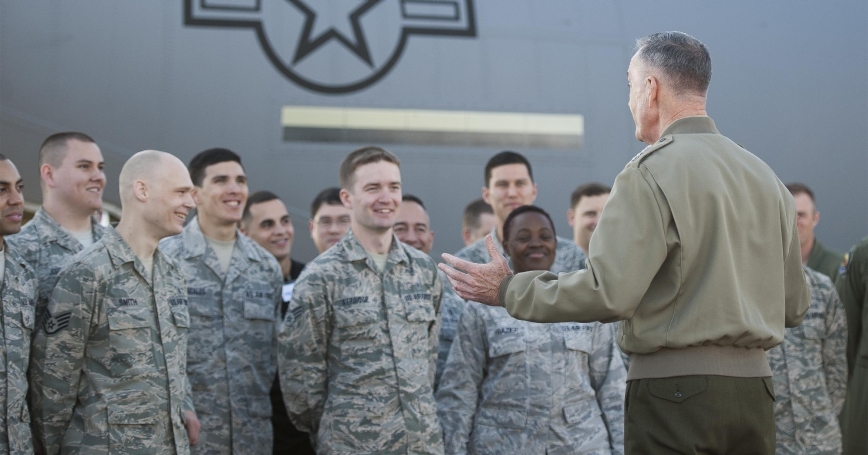 by Daniel B. Ginsberg and Raymond E. Conley

The recent heated debate over military pay and retirement has taken up so much oxygen that other challenges related to the morale, motivation and support of the nation's troops and their families have gone by the wayside. Defense Secretary Ash Carter has now launched the Pentagon into a new review of the military's personnel system: the series of policies, rules and practices that govern how the armed forces attract and retain people. This is the kind of jolt the Pentagon needs if it is going to address serious issues impacting its most precious resource. Fundamental change in these systems faces substantial barriers, and real reform will require years of careful engagement beyond the initial inside-the-building task forces and committees, including the oversight and engagement of Congress.

The secretary's new effort will focus initially on policies to assign, evaluate and promote service members. Not a bad starting point, but to truly address systematic challenges, the aperture of the review will need to be widened to include how the various military services might size, structure and support key missions. Top of this list should be some of the new high-technology mission sets like remotely piloted aircraft and cybersecurity forces. Doing so will require an ability to retain the millennials who comprise a growing percentage of the ranks. Fluent in social media, hyper-connected, incredibly astute, these people desire more flexibility and opportunity than they are being offered in the military. In a world where you can pay bills or connect with a long-lost friend in an instant online, this generation also has little patience for red-tape, glacially slow information systems, and antiquated ways of doing business.

Department leaders seeking to capture and keep these men and women in the service can certainly feel trapped by a promotion system that prizes the cookie-cutter over the peculiar, penalizing anyone whose career progress is outside of the usual. People who took time away to earn a Ph.D., for example, have a hard time continuing upward, while women voluntarily leave the service at a much higher rate than men. There is a nagging sense that the diversity of background and perspective that would help meet the challenges of the day fails to flow into the military from the current system.

The services are having a challenging time holding together the ranks on some of the smaller, high-demand technologically intensive areas like cyber, nuclear deterrence, remotely piloted aircraft and fighter pilots. Here all of the armed services, but particularly the Air Force, struggle to break away from a repeating cycle of morale and retention issues that stem from relentless demand and high-pressure 24/7 operations. Bonuses, bump-ups in training, and organizational modifications can stanch the outflow of people and boost spirits for a short while, but the challenges often return — sometimes far more acutely — as attention turns toward the next crisis du jour.

These personnel challenges in particular communities promise to occur only more frequently as the military shrinks and increases its reliance on high-end technologies, all while maintaining the breakneck operational pace of deployments and training. The department has been lucky that these issues have arisen in sequential fashion. The system would be dangerously overloaded if these issues had arisen simultaneously.

The problem with the current personnel system goes well beyond talent management. A legacy of the Cold War with some elements arising out of the Civil War and the industrial age, the current approach relies on a massive support overhead designed to generate a massive force. Myriad headquarters, training facilities and personnel have the sole purpose of supporting the force, not carrying out line missions.

There is a high-degree of weariness within the Pentagon over yearly overhead reviews, and there is some sense that there is not much more that can be done without risking mission success. This view is reasonable under the current system. Still, a change in the military personnel system could open up whole new realms for restructure and reduction, which could alleviate stress on the force and permit reinvestment into readiness and modernization. Changing the way you do business requires changing what you need to support that business.

Perhaps most demoralizing for the younger men and women in the military are the myriad outmoded and highly dated systems. The current system has served the nation well, but it comes at great cost, and upgrades of such quotidian items as personnel management software systems have repeatedly lost out to readiness or weapons modernization.

The Pentagon faces a hyrda-headed challenge in seeking to support personal growth and development while maintaining relentless operations with unsustainable overhead and antiquated systems. The solution is the broad-scale modernization of human capital management across the department. There is a need to move from a personnel system that works like a blunt instrument and focuses on filling large career areas, to one that uses leading-edge policies and systems to work as a kind of scalpel, focused and targeted on managing individuals and the most pressed career areas. This effort would be the equivalent of moving to a new generation weapons acquisition system, and will require a similar kind of active attention.

Some of the hallmarks of the old system will need to change. As an example, moving people less and keeping them at the current rank longer could bring some stability to the frenetic pace of a military career.

Part of the solution is about going back to basics in human capital management, like making sure the force mix is correct and that the right people are in the right jobs. Assigning some of the high-demand missions to the National Guard and reserves, who can stay in their units and maintain their career focus, would make a great deal of sense. The military also should continue to rely on federal civilian employees and contractors, who can often carry out some tasks more cost-effectively than their uniformed counterparts.

Because the system is codified in law, Congress has a leading role to play in this effort. Through a series of hearings, discussions and floor debates, Congress could explore these challenges in great depth and seek out reform ideas that might have far-reaching effects for tens of thousands of men and women. Congress also must make the spending decisions through the appropriations process, determining, for example, how much money should be devoted to replacing outdated software and IT systems.

The Pentagon has the focus of this reform effort dead-on: setting up the men and women of the U.S. military for success. The U.S. military was once seen as the gold standard for human resources management, getting the nation's best and holding on to those amazing men and women, all while providing the support their families deserve. It is time for the department to recapture that excellence.

Daniel Ginsberg is a former assistant secretary of the Air Force for manpower and reserve affairs and a member of the adjunct staff at the nonprofit, nonpartisan RAND Corp. Ray Conley is a senior management scientist at RAND.

This commentary originally appeared on Military Times on November 3, 2015. Commentary gives RAND researchers a platform to convey insights based on their professional expertise and often on their peer-reviewed research and analysis.