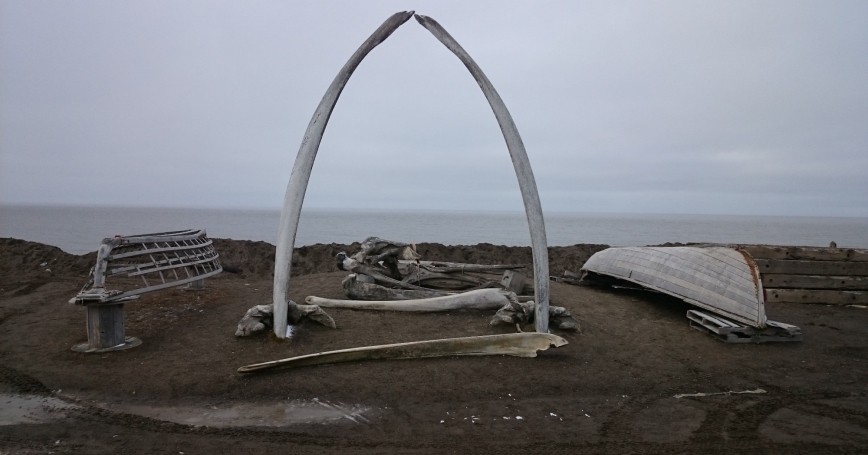 The bones of a bowhead whale, a food source and cultural icon of the native Inupiat peoples who have lived in Alaska for centuries

In a picture, the Arctic. This is Barrow, Alaska, a coastal community of about 4,000 that is nestled precariously at the northernmost point of U.S. territory. It sits at the center of a crucible of factors altering the Arctic landscape that includes native rights, climate change, economic opportunity and geopolitical competition.

Taken together, they raise a question: What steps should the United States take to keep pace with a changing Arctic?

But first, let's return to the picture. These bones belong to the bowhead whale, a food source and cultural icon of the native Inupiat peoples who have lived here for centuries and still call this place home. The Arctic is their land, their heritage, their future. Any activity in the Arctic must take into account native populations.

Climate change has hit the Arctic hard, and communities like these bear the brunt of it. Beyond the whale bones is a temporary seawall, in place to prevent greater coastal erosion.

In September, a relatively new kind of storm, made possible due to larger swaths of ice-free Arctic Ocean, battered Barrow, washing away chunks of coastline, threatening businesses, houses and the freshwater supply. Other climate change effects include retreating glaciers, melting permafrost and a rising sea level.

While mitigation efforts are necessary on a macro level, adaptation measures are needed now for Arctic communities like Barrow.

The Arctic has always held promise as a trove of economic opportunity, if only it could be harnessed and transported. Past the seawall is the Chukchi Sea, then home to two Royal Dutch Shell drilling platforms. After disappointing tests, Shell announced this fall that it is abandoning the Arctic, citing high costs, low oil prices and an uncertain regulatory environment.

The quieter story is that the attempt worked. Despite barriers and public outcry, Shell was able to safely drill offshore wells in a self-sustaining manner 1,000-plus miles from the nearest deepwater port.

The company just missed. Globalization increases demand for resources, retreating sea ice expands access to Arctic waters and technology continues to improve—so it would be naïve to think we have reached the end of this Arctic economic saga.

Climate change, energy security and global trade routes are cornerstones of the geopolitical bingo board. The United States shares the Chukchi Sea with Russia, and Russia is betting big on its Arctic future. The country is refurbishing Arctic airfields, developing new icebreaking ships and building search and rescue stations to support shipping traffic along its coast.

China and India don't want to be left behind. Both have brokered deals with Russia to help develop Arctic energy resources and are becoming comfortable with observer status on the eight member-state Arctic Council.

As for climate change, many countries are looking to the United States for leadership in reaching a global agreement at the summit that opens November 30 in Paris. We shall see.

The recent Conference on Global Leadership in the Arctic held in Anchorage, Alaska, served as a platform to discuss these complex issues. Culturally and geographically, the Arctic is an afterthought of our national culture, and Arctic policy issues have long been neglected and underfunded.

Obama's speech focused on rallying international support for ambitious goals in preparation for the Paris summit. Alaska was simply the backdrop. The release called for Congress to fund a new icebreaker, but with strained budgets it remains unclear how this could happen.

First, we need to exhale. Referring back to the picture, the light snow on the ground is an important reminder that winter is coming in a way “outsiders” simply don't understand.

In November, ice stretches back to this coast, the sun disappears for months, and temperatures can drop to a bitter 50 degrees below zero. The Coast Guard packs up and the media resumes forgetting about the Arctic. As Shell's retreat demonstrates, changes to the Arctic economic environment are occurring, but due to the incredibly remote and difficult operating environment the rise in economic activity is both seasonal and nascent.

Additionally, there is reason to believe that the Arctic will remain an area of peace and cooperation. The region has a strong and well-respected governing body in the Arctic Council, countries are adhering to the agreed-upon international framework for resolving territorial disputes and generally collaborating on such Arctic issues as scientific research and search and rescue.

Even disputes with Russia over Crimea didn't prevent the U.S. Coast Guard from liaising with its Russian counterpart in response to the sinking of a South Korean fishing vessel last December.

Regardless, there is still a real and growing requirement to operate in the region that must be addressed. The United States should focus on the foundations of underwater charting (mapping), infrastructure, climate change adaptation and emergency response capabilities.

Less than 1 percent of the U.S. Arctic's maritime territory is charted to modern standards. The closest deepwater port is in Dutch Harbor, Alaska, 700 miles south of the Bering Strait.

Climate change adaptation will be essential to protect vulnerable communities with limited infrastructure. Emergency response is complicated by a lack of infrastructure, extreme climate and long distances.

Focusing investment in these areas would allow for much needed improvements to the Arctic region. With limited funding available for Arctic investment, policymakers should look toward public-private partnerships and strengthen collaboration within existing frameworks. Charting, infrastructure and emergency response are all areas that benefit industry, government agencies and the public—making them ripe for alternative funding schema.

The difficulties of the Arctic make it a long game punctuated with shorter bursts of attention and activity. Taking advantage of the current high tide to find creative ways to make foundational investments is a smart play in an uncertain game.

Tim Smith is an assistant policy analyst at the nonprofit, nonpartisan RAND Corporation and a doctoral candidate at the Pardee RAND Graduate School.

This commentary originally appeared on Newsweek on November 30, 2015. Commentary gives RAND researchers a platform to convey insights based on their professional expertise and often on their peer-reviewed research and analysis.