Passing Judgment on Russian Plane Crash Before the Facts Are In 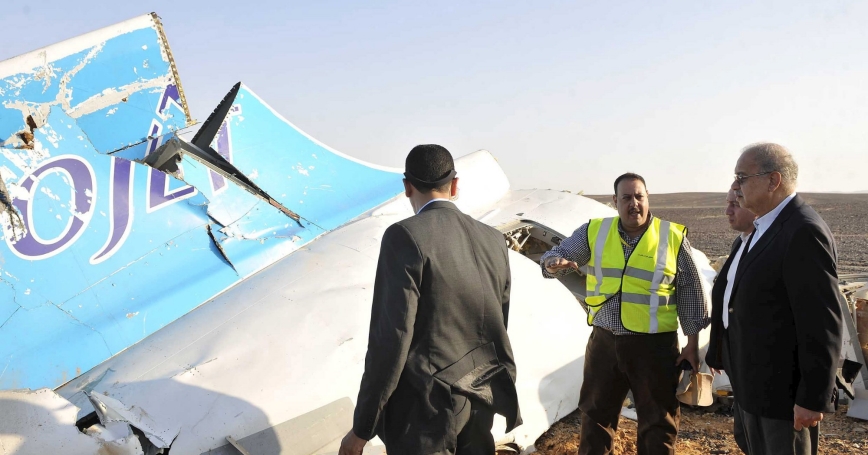 Egypt's Prime Minister Sherif Ismail (right) listens to rescue workers near the remains of a Russian airliner after it crashed in central Sinai, north Egypt, October 31, 2015

Consensus is building that the Oct. 31 crash of the Russian Metrojet plane flying from Sharm el-Sheikh in Egypt to Russia was caused by a terrorist bomb. Public statements have ascended from “more likely than not” a bomb was involved to “99.9 percent” certainty, according to one unnamed U.S. official. Odds are it was a terrorist bomb, but the evidence is still circumstantial and the source of the attack remains a mystery. Passing judgment before the facts are in is a mistake.

There appears to have been an explosion, which caused the plane to come apart in midair. A satellite reportedly recorded a bright flash. The flight recorders reportedly indicate a sudden catastrophic event. The airline says it must have been an external event. Terrorists have claimed responsibility. Intelligence services have picked up terrorist chatter about the crash. There also may have been what, in retrospect, are now seen as suspicious communications before the plane went down. Is there any room for doubt?

Except for the event itself, all of this reporting is based upon leaks, unnamed sources and speculation in the news media. A bright flash and catastrophic event suggest an explosion, but do not necessarily exclude the possibility of a mechanical failure. This would not, in fact, be the first time evidence pointed to a terrorist attack when none existed.

Terrorists often claim credit for attacks, but the claim in this case is unusual. Al Wilayat Sinai, which professes its allegiance to the leader of the Islamic State in Iraq and Syria (ISIS), challenges the investigators to prove that the group did not bring the airplane down. A more credible claim would have provided some details. The Sinai group and ISIS leaders also exchanged messages celebrating the attack.

Terrorist chatter after the event has to be discounted. That terrorists talk about these things is no proof of responsibility. Some of this may be mere bragging, but terrorists know intelligence services are listening and disinformation cannot be excluded. Pre-event messages would carry greater weight, but these cannot have been too precise, otherwise the information could have been acted upon. The pre-event messages acquire meaning and possible significance only in the rearview mirror of the crash.

The Egyptian and Russian investigators are following all leads but have not yet completed their investigation or made public any official conclusion. This is not unusual with this type of investigation, but some are already dismissing the official investigation, pointing out that both Egypt and Russia have strong interests in denying a terrorist cause.

Egypt depends heavily on tourism, its major source of foreign revenue. The political turbulence of the last four years has already cost Egypt almost 40 percent of its annual tourist dollars. Growing violence in the Sinai threatens its major resort in the south.

The confirmation of sabotage of a Russian airliner with 228 dead in retaliation for Russian President Vladimir Putin's military intervention in Syria would not be welcome news in Moscow. It could begin to erode public support for involvement. Proven sabotage could also oblige Russia to escalate its campaign, thus drawing it deeper into what some Russians fear could become another debacle like its engagement in Afghanistan in the 1980s.

But before accusing the investigators of a cover-up, keep in mind the difficulties of such investigations and the surprising twists they sometimes take. The 1996 crash of TWA Flight 800 just after takeoff from New York's John F. Kennedy International Airport was immediately assumed to be a terrorist attack. As in the present case, the plane was ripped apart by a sudden explosion. Some said it was likely a bomb, but there were witness reports of a streak of light arching upward in the night sky at the time of the explosion, which led to theories about terrorists using a handheld surface-to-air missile.

The National Transportation Safety Board (NTSB) took charge of the investigation while the FBI launched a concurrent criminal investigation. These two very different institutional cultures clashed. The mere existence of an FBI investigation confirmed to many that this was a terrorist incident. Routine lines of investigation pursued by the bureau were reported as conclusions, not inquiries.

Weeks after the crash, the news media reported that investigators had found minute traces of explosives on some of the retrieved pieces of the aircraft. This was unusual, since these pieces had lain for some time on the ocean floor where water would likely have washed any chemical traces away. This anomaly was never entirely explained, but investigators concluded that the trace elements probably came from cross contamination created by military personnel involved in the recovery effort.

Thorough investigation of the reports of a streaking light and a lot of geometry about locations and angle of sight showed that the sightings followed the explosion rather than preceded it, and that what witnesses actually saw was part of the exploding plane. Nonetheless, conspiracy theories persisted. And as there will no doubt be in the Egyptian case, there were allegations of a cover-up.

Ultimately, the NTSB investigators narrowed in on an electrical short circuit in a faulty fuel pump, which ignited vapors in the center fuel tank, thus causing a catastrophic explosion. The NTSB issued its final report in 2000, four years after the event. The FBI closed its own investigation the same year.

Things have gone the other way as well. The 1974 crash of TWA Flight 841 into the Ionian Sea during a flight from Tel Aviv to New York was initially seen as some kind of a catastrophic failure of the aircraft. Eyewitnesses saw the plane arch up, roll over and then dive into the sea. Then, too, a terrorist group claimed responsibility, but this claim was dismissed as improbable. Six months later, however, the NTSB released its final report, concluding that the crash had been caused by an explosive device in the cargo hold. The terrorist who designed the device was arrested in connection with another bombing in 1991 and sentenced to 30 years in prison.

Investigations of airline crashes take months, sometimes years, and bringing terrorists to justice can take decades — far beyond the 24-hour news cycle that relies on anonymous sources for updates and talking heads for instant analysis. Many members of the public have already concluded that a bomb brought down the Metrojet plane last month. What crash investigators conclude months from now will likely be irrelevant to them.

Brian Michael Jenkins is the senior adviser to the president of the nonprofit, nonpartisan RAND Corporation and an associate of the Mineta Transportation Institute. In 1996, President Clinton appointed Jenkins to serve on the White House Commission on Aviation Safety and Security, which was created after the crash of TWA Flight 800.

This commentary originally appeared on The Hill on November 12, 2015. Commentary gives RAND researchers a platform to convey insights based on their professional expertise and often on their peer-reviewed research and analysis.