The French Way of War 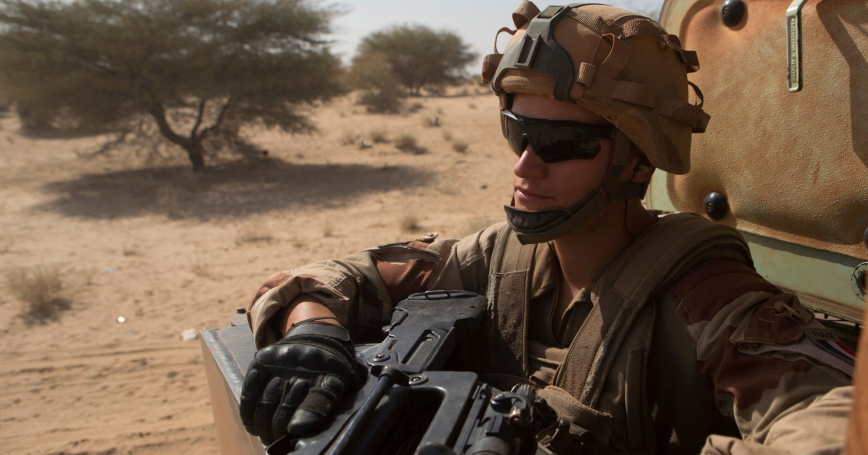 A French soldier from Operation Barkhane rides in an armoured vehicle in Timbuktu, November 5, 2014

France's military may suffer from a poor reputation in American popular imagination, dating from historical events like the rapid fall to Nazi Germany in World War II and the colonial-era defeat at Dien Bien Phu. This is a mistake: The French airstrikes on Islamic State positions in Syria are only the beginning of the counterattack against ISIS, as French officials themselves are promising. And as anyone familiar with France's military capabilities can attest, when it comes to war the French are among the very best.

Moreover, whatever France does probably will not look like anything the U.S. would do. There is a French way of warfare that reflects the French military's lack of resources and its modest sense of what it can achieve. They specialize in carefully apportioned and usually small but lethal operations, often behind the scenes; they can go bigger if they have help from the U.S. and other allies—which they will probably have in any case and know how to put to good use.

Emblematic of the French approach was France's military intervention in the Central African Republic in March 2007. To stop a rapidly moving rebel advance into the country from the Sudanese border, the French attacked using a single fighter plane and two waves of paratroopers totaling no more than a “few dozen” who dropped into the combat zone in the Central African town of Birao. In military terms, what the French did was a pinprick, yet it was sufficient to break the rebel advance like placing a rock in the path of a wave. It was, moreover, a risky thing to do: Airborne assaults are intrinsically dangerous, all the more so when one has little capacity to reinforce or withdraw the lightly armed soldiers in an emergency. The first wave of “less than 10” soldiers reportedly made a high-altitude drop. The French military, moreover, did all this quietly, with the French press only learning of the intervention a few weeks after the fact.

France's intervention in Mali in January 2013 also illustrated these attributes amply. For one thing, the French showcased high-end combined arms and “joint” fire and maneuver capabilities, meaning they deftly made use of everything they had at hand—special forces and conventional forces, tanks and infantry, artillery, helicopters, and jet fighters—in an orchestrated and integrated fashion that made the most of every resource available.

To put it another way, the French in Mali played major league baseball (though perhaps we should no longer consider ISIS a “JV” team, as President Obama once did). They did so, moreover, with a scratch 'pick-up team' consisting of bits and pieces of a diverse array of units cobbled together in great haste and on the fly. Some of these could be considered elite, but most were not. In addition, the French put this ad hoc force up against a dangerous enemy that was operating in the worst imaginable physical environment—all with barely enough supplies simply to keep French troops from dying of thirst and heat exhaustion. French soldiers' boots literally fell apart because the glue holding them together melted from the heat. The French went places their enemies assumed they would never dare go, fighting hand-to-hand among caves and boulders deep in the desert. For example; they chanced a nighttime parachute drop into Timbuktu to take on a force that might have outnumbered them. For American military observers, the one word that sums up their assessment is respect.

What makes the French way of war distinct from, say, the U.S. way of war has to do with scarcity. The French military is highly conscious of its small size and lack of resources. This translates into several distinctive features of French military operations. One is an insistence on modest objectives, on limiting strictly the aims of a military invention in line with a modest assessment of what the military can accomplish. The French thus aim low and strive to achieve the minimal required. Whenever possible, they try to limit the use of the military to missions for which militaries really can be of use. Meaning, militaries are good at violence; if violence is what is required, then send in the military. Otherwise, not. The French military abhors mission creep and want no part in things such as 'nation building.' In Mali, for example, the French military sees itself as good at killing members of a few terrorist groups; that is what they do, and they refuse to get involved in anything else, such as sorting out Mali's political mess or involving themselves in the conflict among Mali's various armed rebel groups and between them and the Malian state. Of course, that means the French military is not doing a lot of what Mali needs, but the French are sticking to their policy.

Another feature of the French way of war is scale. Whereas the U.S. military tends toward a “go big or go home” approach to war—American planners arguably take for granted their ability to marshal vast resources and firepower—the French military embraces ”going” small. They strive for sufficiency and hope to achieve limited goals through the application of the smallest possible measure of force, what they refer to as “juste mésure,” i.e. just enough to get the job done, and no more. This requires knowing how much is enough, not to mention accepting risk that Americans would prefer not to run and largely do not have to. The French accepted going to Mali with insufficient medical evacuation resources, for example. The U.S. military probably would not make that call.

Keys to the French approach include substituting quality for quantity, and fighting smart, of making the most of the tools at hand. One does not drop a few dozen paratroopers into Birao, where they are likely to be outnumbered and possibly outgunned, unless one knows precisely what needs to be done, where, how, and for what purpose. In Mali, the French forces deployed without sufficient water, but they knew exactly where to get it once there. They knew, moreover, who the local actors were, whom to trust and to what extent, and how to leverage local forces to make up for their own small numbers.

The French military's self-awareness with respect to its limitations help it to work well with the United States. Informed by their experience working with American resources in Afghanistan, Libya, Mali, Somalia, and currently in the Sahel, the French know how to work with Americans. They also know precisely what they need most from the U.S. and what to do with it, namely aerial refueling, intelligence, surveillance, and reconnaissance (ISR), and heavy lift (large cargo planes such as the Air Force's C-17s). When the U.S. provides any of these things, or indeed when the U.S. provides any additional capability that the French themselves do not have, the French take it and are off and running. The cooperation is therefore not just close but effective, although usually behind the scenes.

The French might not be able to defeat ISIS—certainly not alone. They might not, moreover, have any better ideas than we or anyone else for how to win. But, based on their history, whatever they do in addition to the recent airstrikes, they are likely to act in a measured way and think first. They might act quietly, so quietly we might never hear of it. But one thing is certain: If the French are determined to hurt someone, they will.

This commentary originally appeared on Politico on November 17, 2015. Commentary gives RAND researchers a platform to convey insights based on their professional expertise and often on their peer-reviewed research and analysis.