The West Needs to Take a Tougher Line with Putin 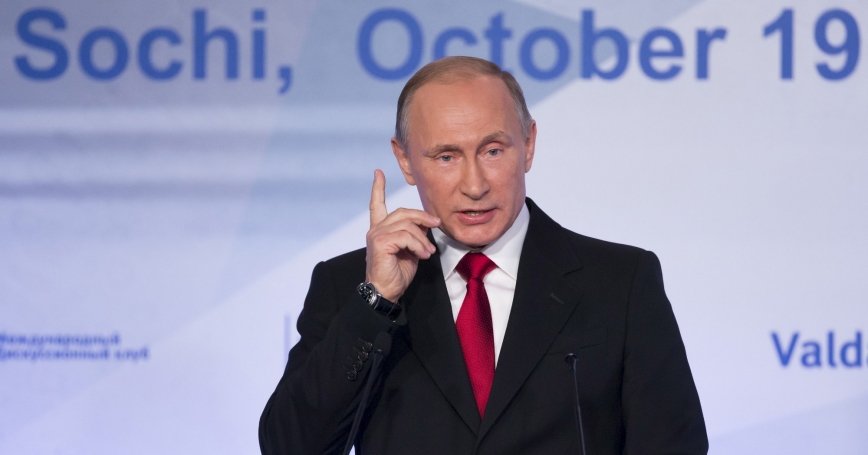 In responding to Russian thrusts in Ukraine and Syria, the West has relied on economic sanctions or conceded initiative to Moscow. Experience shows that direct measures—ones that target troublesome behavior—are more likely to be effective.

In Ukraine and Syria, the West seems less sure of its aims and less committed to achieving them. In contrast, Russia appears to have clearer goals, cares more about outcomes, lies closer to the contested theater and acts with dispatch.

This was also true when the USSR invaded Afghanistan in 1979. President Jimmy Carter responded by seeking to organize a boycott of the 1980 Summer Olympics in Moscow, but only some Western allies went along. Carter halted the export of U.S. grain to the USSR, but U.S. farmers were outraged and a year later President Reagan canceled the embargo.

Responding to aggression in Afghanistan and the imposition of martial law in Poland in 1981, Reagan banned U.S. companies and their foreign subsidiaries from selling energy technology to the USSR. Within a year, European protests forced him to lift the sanctions.

A lesson: Economic sanctions tend neither to be sustainable nor cause Moscow to cease troublesome behavior.

In contrast to these indirect measures, the British, Chinese, Saudis and Americans had more impact by providing substantial aid to Mujahideen resistance fighters via Pakistan. In the mid-1980s, America stepped up the pressure by providing Stinger anti-aircraft missiles, enabling the Muj to neutralize a devastating Soviet air campaign. Another help was Soviet President Mikhail Gorbachev's eagerness to reduce military costs and lift popular morale. Thus in 1989, after a decade of war in Afghanistan, the USSR withdrew its combat forces.

Direct Western responses have blunted other Soviet moves. In the 1970s, the USSR began deploying a new intermediate-range nuclear-armed missile aimed at Europe and Japan. NATO countered with its own missile deployments, and in 1987 the United States and the USSR agreed to ban both sides' missiles.

These episodes suggest how the West might better respond to Russian military thrusts in Ukraine and Syria. In Ukraine, the West has emphasized sanctions against Kremlin-linked cronies and state enterprises, economic aid to Ukraine and training of Ukrainian forces away from the war zone. But NATO and its members have shied away from providing lethal defensive arms, and from permanently moving NATO forces to the territory of its eastern members, although some forces are being rotated through the region.

The West has responded even more modestly to Russia's deployment of combat air and ground forces to Syria, and warships with advanced anti-aircraft missiles off its Mediterranean coast. The West has voiced strong rhetorical concern, but not acted to impede Russian air attacks on U.S.-backed rebels fighting against the Bashar al-Assad regime. This faint response has convinced many in the region that Russia is more determined than the West to shape events there.

Russia and America have agreed to technical air safety protocols for the Syrian theater, but beyond this President Barack Obama signals restraint: “We're not going to make Syria into a proxy war.” Washington opposes the creation of a no-fly zone in Syria to protect displaced persons. It also refuses to give the rebels it backs hand-held anti-aircraft missiles, although it has boosted supplies of anti-armor missiles.

Kremlin leaders may well infer from the West's restrained responses that it will not defend its interests or sees them as only modest.

Kremlin leaders may well infer from the West's restrained responses that it will not defend its interests or sees them as only modest. The West should consider acting to reduce these risks. This would mean rebalancing the tools used to influence Moscow's behavior.

Western sanctions seem inadequate to cause Russia to withdraw from eastern Ukraine, much less Crimea, and political dynamics in Europe suggest that sanctions may not long be sustainable. Moreover, despite some financial pain, Russian society is adjusting to sanctions and oil price volatility.

While maintaining U.S.-EU alignment on sanctions, the West could give higher priority to direct, targeted measures. To strengthen deterrence against possible future aggression, America could station army brigades in Poland and the Baltics, and help arm the Ukrainian military. In Syria, the West could establish a safe zone for displaced persons, with America guarding the airspace and Turkey the ground. The West could rotate more warships through the eastern Mediterranean and the Black Sea.

Russia's moves in Ukraine and Syria are fraught with risk. The bloodless takeover of Crimea evidently emboldened the Kremlin, but then in eastern Ukraine Russia met stalemate. In Syria, Russia is unlikely to reverse the sagging performance of the Assad regime. Public support among Russians for the Syrian intervention will undoubtedly drop if more Russian troops are killed or there is a major terrorist incident at home.

For these reasons the Kremlin seems now to be giving more attention to the Minsk peace process for eastern Ukraine, and to the search for a political solution in Syria. In both cases Russian cooperation with the West will be essential to success.

But military asymmetries in Ukraine and Syria that favor Russia may cause it to resist needed compromise. By responding more robustly to Russia's interventions, the West could reduce the asymmetries and improve prospects for negotiated outcomes.

This commentary originally appeared on Newsweek on October 31, 2015. Commentary gives RAND researchers a platform to convey insights based on their professional expertise and often on their peer-reviewed research and analysis.