What Is America's Role in the World? 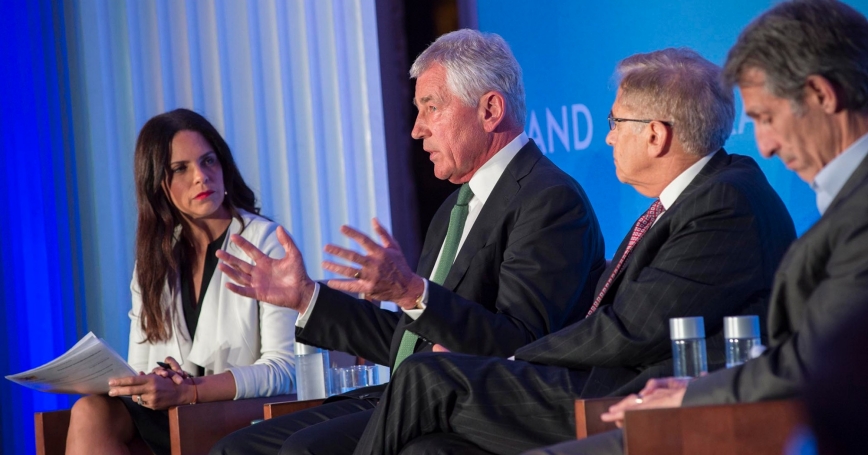 So said Chuck Hagel at an event in Santa Monica on Wednesday, November 11, Veterans' Day, in response to the question posed by journalist Soledad O'Brien: “What are the biggest challenges the U.S. will deal with as we head into a new administration?”

The event, One Night with RAND: Set Politics Aside and Join the Conversation, brought together leaders in business, philanthropy, government, academia, and media. Hagel, 24th U.S. Secretary of Defense; Michael Lynton, CEO, Sony Entertainment, Inc.; and Michael Rich, President and CEO, RAND Corporation, joined moderator O'Brien for a discussion about the international strategic choices that will shape the U.S. role in the world for years to come.

How can the U.S. address a threat to its security like cyber? Hagel asserted that the U.S. can't just rely on its military. “It's bigger than the military,” he said.

Hagel then posed a question of his own: “Does the U.S. want to continue to be the leader in the world that it has been since World War II?”

How can “soft power” be used to achieve these goals? O'Brien turned to Lynton, asking him how film and television can shape America's role in world.

“As international markets became more important and more politicized, we as the movie studios have washed out the American element,” Lynton said. “In the first Spiderman, he sits with the American flag. Now, we would never do that.”

Lynton went on to describe modern American television as “much more subversive — Weeds, House of Cards, Breaking Bad… These reflect a different kind of America. They speak to a free society, a capitalist society.… They demonstrate to the world that in this country, there isn't anything that constrains our writers or television networks.”

Hagel built on the theme of soft power. “We're not going to solve the Middle East with more troops and bombs,” he said. “Attitudes, religion, history, culture, and tribalism are all at play. The U.S. needs to do a better job of reversing the optics of how the world sees us.”

Rich was not convinced that cyber is the biggest threat to the U.S. “I think it may be political polarization,” he said, noting that it is difficult for the country to come up with a coherent strategy if one side of the political aisle is determined to undo whatever the other accomplishes.

He also stipulated that we can't pose the question of soft power versus hard power as an “'either or' choice. We have five potential adversaries with whom we could be in conflict soon. Three have nuclear weapons, the other two have nuclear ambitions.”

For more on RAND's analysis of the most critical global choices and challenges facing the country, Rich directed audience members to the RAND Strategic Rethink project, a guide produced by RAND's experts for policymakers, citizens, educators, and the media as we head into a presidential election year.