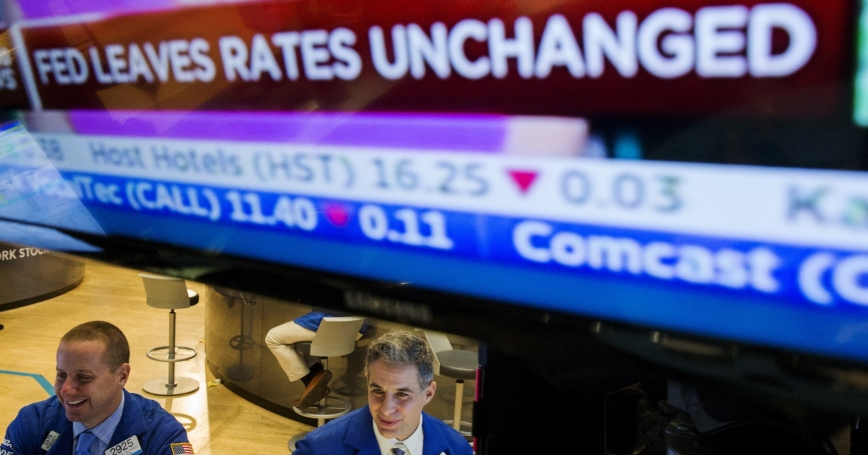 Traders work on the floor of the New York Stock Exchange after an announcement by the Federal Reserve, October 28, 2015

Income inequality in the United States has been rising for a generation, but its pace has substantially increased since the 2008 start and continuance of the Federal Reserve's aggressive monetary policy — specifically, establishing and sustaining near-zero short-term interest rates. Of course, correlation (between zero rates and rising inequality) doesn't imply causation, but neither does correlation preclude it. A causal mechanism that connects mandated near-zero rates to increased inequality might operate through the unintended consequence of boosting the share of profits in national income. Since profits usually accrue mainly to recipients already in the upper-income brackets, inequality might thereby be increased.

In the 1980s, the share of U.S. pretax income earned by the top 1 percent of recipients was 8 percent; by 2014, the share had risen to 21 percent. A broader and more widely used measure of inequality — the Gini coefficient — has risen by 30 percent in the same period. Currently, the U.S. Gini coefficient is in the mid-range, between 0.41 and 0.45. (1.0 represents maximum inequality; zero represents minimum inequality.) Among other countries, Japan and most of the European Union have less inequality than the U.S., while China and Brazil have greater inequality.

These and most other indicators of U.S. income inequality, and virtually all public debate on the subject, are based on pretax income. Despite the bizarre patchwork reflected in the U.S. tax system, after-tax income inequality is substantially less than pretax income. This is because the top 1 percent of income recipients pay 37 percent of total tax revenues, and the top 5 percent and 20 percent, respectively, pay 60 percent and 70 percent of tax revenues. The bottom 50 percent pay little or no income taxes.

That pretax inequality has been rising for so long suggests it's driven by long-term societal trends that are both hard to change and truly complicated. These drivers are well known, although their relative strength is not. They include family structure, parenting and neighborhood effects, access to quality education, immigration (both legal and illegal), information technology and other innovations that lead to the substitution of fewer high-skilled and higher-earning workers for more numerous and lower-paid labor. Also prominent among the long-term drivers of inequality is the inertial effect of poverty itself — poverty severely impedes emergence from it.

Although these drivers are crucial in the long-term, they stand apart from the near-term accelerator effects of the Fed's mandated near-zero short-term interest rates and its longer-term eased monetary policy.

To explain these effects, consider who benefits from near-zero short-term interest rates. Debtors surely are among the beneficiaries, because low rates reduce the cost of new debt and lower the cost of servicing (through refinancing) previously acquired debt. Consumers benefit through reduced costs of debt-financing for purchases of goods and services. So, near-zero short-term interest rates may stimulate demand.

Creditors can also benefit by arbitraging the gap between the Fed's mandated low rates and normal, market-based interest rates. In addition to commercial and investment banks, nonbank credit sources are major beneficiaries of near-zero short-term interest rates. These sources include private equity, hedge funds and venture capital funds. They are particularly adept at using low interest rates to leverage the resources they already possess and profitably deploying the expanded assets in their financial activities. Sometimes the activities entail foreign acquisitions, and sometimes they entail short sales in the U.S. as well as abroad.

Outside the financial sector, companies — both large and small — also benefit because the low rates reduce their costs of securing working capital. Until the end of 2014, near-zero short-term interest rates were accompanied by large-scale, successive waves of what the Fed termed “quantitative easing,” from which businesses benefited from lowered costs of longer-term capital as well.

Whether near-zero short-term interest rates have helped or hindered economic recovery is not the issue here. What is the issue is that mandated low rates may have and possibly continue to have adverse effects on income inequality. Those who argue for the continuation of near-zero short-term interest rate policy should be cognizant of its likely adverse effects on inequality.

Charles Wolf, Jr. holds the distinguished chair in international economics at the RAND Corporation. He is the author of Puzzles, Paradoxes, Controversies, and the Global Economy.

This commentary originally appeared on U.S. News & World Report on October 30, 2015. Commentary gives RAND researchers a platform to convey insights based on their professional expertise and often on their peer-reviewed research and analysis.