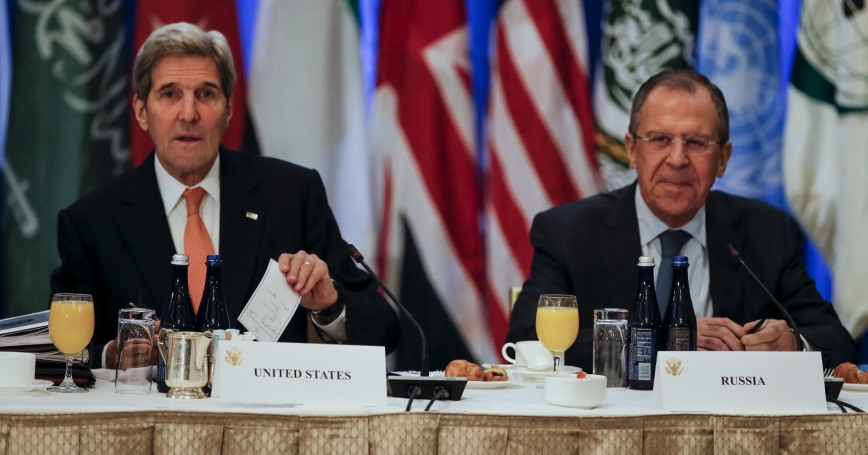 Today in New York, the International Syria Support Group — about 20 countries looking to broker an end to the Syrian civil war — will meet for the third time. The group, a minor miracle in itself, brings to the same table countries with such divergent interests in Syria as Iran, Saudi Arabia, Russia, Turkey and the United States. The willingness of these states to meet seems to reflect a new sense of urgency in the face of rising casualties, the growing refugee crisis, the downing of civilian and military aircraft from Russia and terrorist attacks in Beirut, Paris and California.

The international group is a good start — this war will end only when the external powers that have been fueling it agree on a solution — but the initiative will not succeed unless its objectives are redefined.

The current goal is a comprehensive political framework that includes reform of Syrian institutions, formation of a new government, the identification of “terrorist groups” and a plan for elections. Those are laudable goals. Unfortunately, there seems to be no prospect of near-term agreement on detailed institutional arrangements, let alone new leadership. With key players so deeply divided over the future of Syrian dictator Bashar al-Assad, pursuing a comprehensive framework seems a recipe for continued war, displacement and instability, all of which are fueling the radicalization behind the rise of the Islamic State.

Instead of delaying a halt to hostilities while trying to bridge these currently unbridgeable gaps, we advocate a more limited approach, based on a different sequence. The International Syria Support Group should concentrate on securing an immediate cease-fire and arranging for its enforcement, followed by further negotiations on the shape of a reconstituted Syrian state. Even this will be hard to agree on, but it is a more realistic goal for now, and it is hugely preferable to the main alternative: the continuation or even escalation of a devastating war.

Our plan would include maintaining Syria's unity and territorial integrity, but it would be based on the reality that different parts of the country are already largely controlled by different ethnic groups backed by different outside powers. Those powers and their Syrian clients could agree to provisionally define and accept three corresponding “safe zones” — one controlled by the regime in the west, one controlled mainly by the Kurds in the northeast and one noncontiguous zone in the north and south controlled by the moderate Sunni opposition. A fourth zone would be created in central and eastern Syria in which the Islamic State would be targeted by all. The external powers most closely involved, including Russia, Iran, the United States, Turkey and Jordan, would guarantee adherence to the cease-fire among their respective proxies.

Establishing these three safe zones might require some transfer of territory among the factions to establish clear armistice lines and supply routes. The most difficult concessions for the Assad regime would be leaving parts of Hama and Aleppo under the control of the moderate Sunni opposition. But this would be offset by the moderate opposition's withdrawal from (or at least acceptance of regime control over) the small islands of territory it holds within the regime zone and the removal of its brigades from the outskirts of Damascus.

Immediately following the cease-fire, the United Nations would convene all of the Syrian factions that accepted the plan to begin negotiating on the future of a unified state. Restoring a unified Syria would likely take time, if it is possible at all. The resulting state might be federal or confederal. Reaching an accord would probably involve granting extensive autonomy, including control over security, to local authorities. It might involve some form of sectarian power-sharing and require specific guarantees for minorities within each region. It might involve constitutional reform to redistribute institutional powers and an election in which Assad would not run. These would be issues for the Syrians to work out, under U.N. auspices and with the involvement of the external powers. They would be difficult to resolve, but not as difficult as they are now, as the killing continues.

Critics will say that the regime will never accept opposition control anywhere in the country and that the opposition will never stop fighting as long as Assad remains in power. Both may be true, but it is also true that a serious cease-fire proposal along these lines has never been endorsed by the external actors and presented to the parties. Assurance that the regime can continue to govern Damascus and other cities along Syria's western flank might just be enough to convince Assad and his sponsors that stopping the fighting is in their interest, as opposed to perpetuating a costly war indefinitely.

Nor have the opposition and its sponsors ever been presented with what would be on offer here: a cease-fire to stop Assad's offensives, including “barrel bombs”; local autonomy, backed by the international community and accepted by the regime, in the zones it controls; the delivery of badly needed humanitarian aid to a beleaguered population; prisoner releases; and a process to sort out Syria's political structures and leadership.

No one should pretend that there is a way forward in Syria without significant costs or risks. But making a political settlement a prerequisite for peace is a recipe for perpetuating a brutal conflict. At this point, almost any peace would be better than the current war. Our proposal is not without its challenges, downsides or risks. But we believe it would be far better than the status quo and more practical than any of the available alternatives.

Philip Gordon, a senior fellow with the Council on Foreign Relations, was White House coordinator for the Middle East from 2013 to 2015. James Dobbins, a senior fellow at the RAND Corporation, served as the State Department's special representative for Afghanistan and Pakistan from 2013 to 2014. Jeff Martini is a Middle East analyst with RAND. The commentary is adapted from the RAND report, A Peace Plan for Syria.

This commentary originally appeared in Washington Post on December 17, 2015. Commentary gives RAND researchers a platform to convey insights based on their professional expertise and often on their peer-reviewed research and analysis.