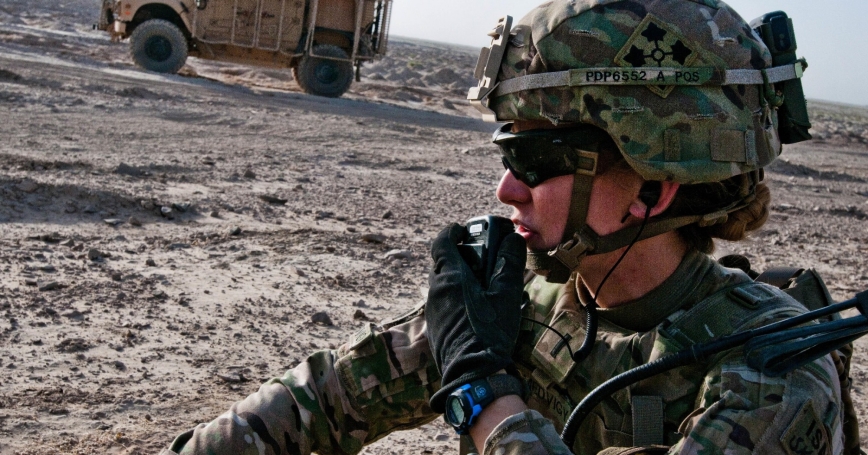 When women began serving in the U.S. military during the Revolutionary War, they did so disguised as men. Today, they represent approximately 15 percent of the force. Despite the continual expansion of women's roles in the military and the increasing number of female veterans, research on their specific physical and psychological health issues has remained relatively sparse. Women at War attempts to change that. The co-editors are medical doctors. Elspeth Cameron Ritchie is a retired Army colonel; Col. Anne L. Naclerio is deputy surgeon, U.S. Army Europe.

The volume covers not only women at war but also their return home from war, the psychological issues of active-duty women, and the experiences of female veterans. The chapters—written by 40 authors with vast experience within DoD, VA and beyond—cover a range of topics, including reproductive health, psychological health, suicide, intimate partner violence and military sexual trauma. (Full disclosure: I have presented on panels and professionally collaborated with co-authors of several of the chapters.)

The authors approach their subjects with varying degrees of clinical specificity. The chapter “Issues in the Prevention of Malaria Among Women at War,” for example, narrowly focuses on its topic in a highly technical way. “Traumatic Brain Injury: Implications for Women in the Military” contains information on blast-induced and repeat traumatic brain injury, medical and neurobehavioral outcomes, and the possible protective factor of female endogenous hormones.

Conversely, the chapter “Building the Framework for Successful Deployment Reunions” is a much more personal account of experiences and lessons learned as the author and her husband took turns deploying to and returning home from war zones. Similarly, “Women, Ships, Submarines, and the U.S. Navy” includes an abundance of personal anecdotes and “clinical pearls” of wisdom for doctors serving on Navy ships.

A few chapters focus on narrow populations and time frames, such as “Female Combat Medics,” which describes a recent longitudinal study of behavioral health among U.S. Army combat medics. Others are broader and more wide-ranging, including “Compensation, Pension, and Other Benefits for Women Veterans with Disabilities,” which delves into the history of disability compensation and pensions given to women who have served in or with the military from 1775 to the present.

For those who choose to read the book front to back rather than focusing on specific chapters of interest, some weaknesses become clear. Because different authors wrote the 19 chapters, many cover the same ground, often opening with a brief history of women in the military. This becomes tedious. Various authors also either repeatedly cite the same statistics or different statistics about the same topic, leading to confusion about which may be more accurate. Occasional inaccuracies jump out, such as the assertion in “Female Soldiers and Post-Traumatic Stress Disorder” that “Brigade Combat Teams … are combat troops and therefore male.” These teams include engineer, signal and military intelligence companies—with, of course, women.

There are also discrepancies in how each chapter characterizes recent developments. Some correctly refer to DoD rescinding the policy banning women from direct ground combat, while others refer to a combat exclusion law being repealed. Although that may seem like a minor quibble, such inaccuracies could make a reader question the veracity of more important clinical aspects of the work.

Given that musculoskeletal injuries are among the top reasons veterans separate from the military, there is a surprising dearth of information on women-specific issues in that area. Other acknowledged weaknesses of the volume are the lack of broader comparative international perspectives (only Australia is represented), and no presentation on the experience of gay women service members.

Women at War is aimed at health care providers who care for female service members, and they will likely derive the most benefit from clinical recommendations. However, the information will also be useful to providers who care for female veterans and military family members, as well as nonprofits and advocacy organizations that work with these communities. Students and researchers looking for new avenues of study will find many areas identified as ripe for further research. The chapter “Human Sexuality and Women in the Area of Operations,” for example, points out significant gaps in the literature.

The book is rich with history, data and anecdotes regarding female military and veteran issues, making it a valuable addition to the collection of anyone who works or holds deep interest in these issues. The $85 suggested retail price, however, may make it more suitable for institutional rather than individual libraries.

Kayla Williams, a former Army sergeant and Arab linguist, is a senior project associate at the nonprofit, nonpartisan RAND Corp. and the author of Plenty of Time When We Get Home: Love and Recovery in the Aftermath of War.

This commentary originally appeared on Army Magazine on December 14, 2015. Commentary gives RAND researchers a platform to convey insights based on their professional expertise and often on their peer-reviewed research and analysis.