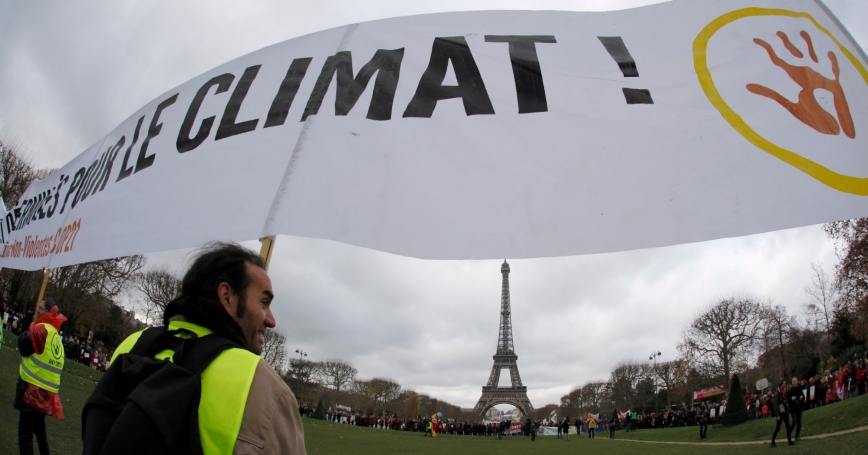 Environmentalists hold a banner which reads in part, "For the Climate," near the Eiffel Tower during the World Climate Change Conference 2015

Over the last two decades, nations have tried and failed to reach consensus on a viable plan for addressing climate change. Negotiators in Paris last week achieved a historic breakthrough by adopting a fundamentally different, and likely more effective, institutional framework.

Previous negotiations and agreements emanating from the 1992 United Nations Framework Convention on Climate Change (UNFCCC) aimed to achieve legally binding commitments by all nations to reduce greenhouse gas emissions. That effort repeatedly failed because the required reductions were far too large, the means to achieve these reductions unproven, and the disparities between developed and developing countries too great. No consensus agreement among so many nations could have possibly overcome these obstacles using a top-down, precisely defined, legally binding plan.

The Paris negotiators achieved a breakthrough by re-fitting the UNFCCC with a fundamentally different institutional model. It builds on two important concepts missing from past attempts to forge a global treaty: voluntary participation and adaptive policymaking.

The new agreement creates a club of 195 nations with common aspirations — reducing net human emissions of greenhouse gases to zero over the course of the 21st century — and common norms of behavior. In particular, membership in the club requires nations to submit ambitious national emission reduction plans and subject them to international review. Benefits of club membership include international acknowledgement of participation in this vital task, financial aid and technical assistance for many developing countries, and international obligations that national leaders can use to influence their internal domestic policy debates.

The Paris Agreement also fully embraces “adaptive policymaking,” which explicitly aims to achieve ambitious goals by fostering experimentation and adjusting strategies and goals over time as new information emerges. An adaptive policy has several critical features that distinguish it from business as usual approaches to government mandates. It is forward-looking in its outlook, decentralized in its implementation, and typically employs diverse approaches to implementation, tailored to the needs and conditions of specific places. The key idea is to establish repeat cycles of implementation, review, and learning.

Halting climate change is a classic example of a policy challenge that demands an adaptive response. The long-term goal is clear — reducing net emissions to zero — but the path to achieve it deeply uncertain, requiring radical transformation of the ways nations power their economies in ways we cannot yet fully imagine.

The Paris Agreement reaffirms the ambitious goal of holding global temperatures within 2 degrees Celsius above pre-industrial levels, and even adds a new aspiration of not more than a 1.5 degree increase. Even 2 degrees seems impossible with current technology. The agreement asks nations to submit emission reduction pledges, with increasingly stringent updates every five years. It also includes provisions for transparency to help make nations more accountable for their progress. As such, the agreement includes many of the key components of effective adaptive policymaking.

How can we reconcile a voluntary, flexible agreement with ambitious long-term goals? As widely noted in the press, the current round of national emission reduction pledges only add up to about half the global reductions needed to limit climate change to the 2 degree target. But in an adaptive policy framework, this is a feature, not a bug. Nations commit now to the reductions they believe can accomplish, and promise new pledges as they learn more.

That said, successful adaptive policies also require mechanisms for ensuring that momentum towards the goals is maintained. While its text prohibits nations from reducing their emission reduction pledges at each update, the Paris Agreement lacks any enforcement mechanisms. Rather, the agreement relies on peer pressure, otherwise known as international norms of behavior, to encourage nations to meet and upgrade their pledges.

Will peer pressure prove sufficient to maintain momentum? To increase the likelihood that it will, the Paris Agreement makes an important pair of bets. The first is that the agreement will encourage the private sector to shift innovation and investment away from fossil fuels towards low carbon technologies. The second bet is that it will encourage governments to take steps — such as phasing out fossil fuel subsidies, establishing a price on carbon, and investing in basic research for new energy technologies — needed to accelerate that shift.

Provisions in the Paris Agreement regarding capacity-building for developing countries, participation by the private and non-profit sectors, decentralization, and a diversity of approaches all encourage such innovation and actions. As one promising development, the Breakthrough Energy Coalition, a group of 25 billionaires led by Bill Gates, and Missions Innovation, a partnership of 21 national governments, announced large new R&D investments in carbon-reducing technology at the start of the Paris meeting.

These actions could significantly enhance momentum. If at least some nations forge a path to a low-carbon economy, others will face more peer pressure to follow. In addition, once a critical mass of nations emit much less than they do now, the threat to laggards from trade sanctions and other enforcement mechanisms currently absent from the Paris Agreement will become more credible.

Before the Paris negotiations, President Obama said that he was “less concerned about the precise…country targets [because] a percent here or a percent there…is not going to be a deal-breaker.” Instead, he looked to the agreement to create a sense of momentum. In the coming weeks and months, we will see if this initial momentum translates to new action and meaningful progress in both the public and private sectors.

After two decades of trying, the international community has finally reached an agreement to address climate change. The Paris Agreement relies on a new institutional framework and two crucial bets. In a sense, it pushes as far as a consensus international agreement can go by setting ambitious goals and providing a process and incentives for advancing towards those goals. But its ultimate success will depend on a massive shift of private investment towards low-carbon technology and government policies to encourage such shifts. Whether or not the agreement succeeds depends on whether nations and firms succeed with the transformative technologies that may finally start bending the curve of rising greenhouse gas emissions, rising temperatures, and rising seas.

Robert Lempert is a senior scientist, Debra Knopman is a principal researcher and Jordan Fischbach is a policy researcher at the nonprofit, nonpartisan RAND Corporation.