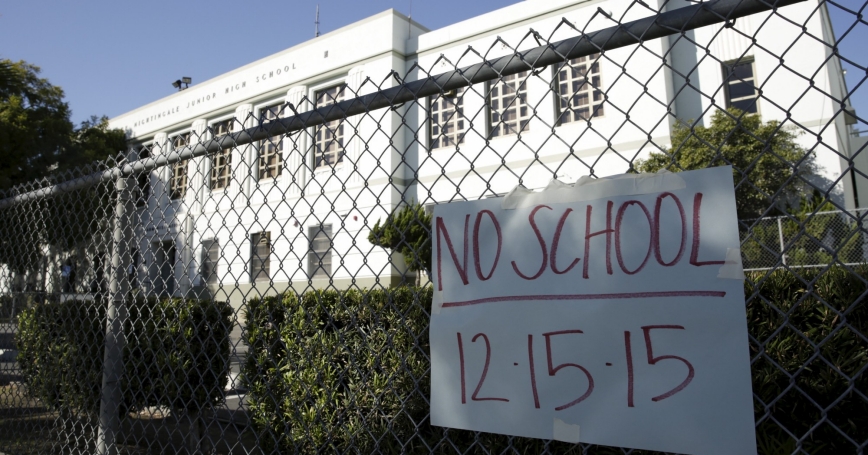 A no-school sign is pictured at Florence Nightingale Middle School in the Cypress Park neighborhood of Los Angeles, California, December 15, 2015

“Goldenrod” isn't another James Bond movie but the codename for a citywide exercise in 2006 that tested how Los Angeles would respond to a major terrorist threat. Details of the fictional plot were closely held, but reflected concerns at the time that terrorists might disperse anthrax, ricin or dangerous chemicals in public places. The scenario was designed to create mounting pressure on city and county officials in the face of growing public alarm. The city passed with flying colors.

But last week, the system failed when the Los Angeles and New York City school systems — the two largest public school districts in the United States — received similar terrorist threats on the same day. Both cities were dealing with a threat serious enough to notify federal authorities, yet neither was aware of what the other was doing while critical decisions were being made. That's more than a failure to communicate. That's a complete breakdown.

While New York City decided to dismiss the threat as a hoax, Los Angeles decided the threat warranted a systemwide closure. To close schools or not is ultimately a responsibility of local officials. However, such a decision is not purely a local matter. Since 9/11, the federal government has erected an enormous domestic security bureaucracy to protect against terrorism. One of its functions is to analyze threats and to share its findings so that sensible decisions on how to respond can be made.

When dealing with similar threats, how could one major city not know about the other's situation? New York and Los Angeles both spoke to the FBI about the threats they received. One would think the threats were brought to the attention of FBI headquarters and the National Counterterrorism Center. Yet Los Angeles did not know that New York — after consulting with the FBI — had decided its threat was a hoax. And New York did not know that Los Angeles had received a similar threat and come to the opposite conclusion. Caught by surprise, New York Mayor Bill de Blasio and Police Commissioner William Bratton were put in the uncomfortable position of commenting on Los Angeles's decision; both were critical. The mayor called the threat outlandish and the police commissioner pronounced the school closing a significant overreaction.

When dealing with similar threats, how could one major city not know about the other's situation?

Things didn't get better at the press conference in Los Angeles when Mayor Eric Garcetti began by saying the decision was not his to make. Sharp reporters on the scene immediately interpreted this as the mayor distancing himself from the decision to close the schools. When it was his turn to speak, Los Angeles Police Chief Charlie Beck bristled at what he called “irresponsible criticism,” a mysterious comment unless one was already aware of Bratton (a former chief of the Los Angeles Police Department) criticizing the Los Angeles decision.

In the aftermath of the decision, the city of Los Angeles performed well. It got the kids home safe from the closed schools, searched thousands of school buildings and opened schools the next morning, but the hint of internal disagreement in Los Angeles — along with the mayors and police chiefs of America's two largest cities taking shots at each other — became red meat for the news media. National unity, even local unity, appeared to be lacking. Washington didn't appear to be weighing in.

The participants in the 2006 Goldenrod exercise were actual officials from local, state and federal offices, and included the mayor's office, the Los Angeles Police Department and the FBI. As in real-life cases of terrorists attempting to employ weapons of mass destruction, the capabilities of the fictional terrorists were limited in this fictional scenario. Their success depended on creating an atmosphere of fear, which would cause people to exaggerate the threat they posed — that's how terrorism, in large part, works.

Emotions can sometimes rise to the surface in such exercises, but in the case of the 2006 exercise, they did not. Participants followed protocols, ensured overall coordination, spoke from the perspective of their individual experience and competencies, made decisions within their jurisdictions and discussed broader strategy, all while keeping the public informed. It was boringly reassuring. One came away with the impression that those in charge were prepared to handle such incidents and that the people of Los Angeles were well-served.

Last week's real-life handling of terrorist threats calls into question the ability of national and local government to coordinate a terrorist crisis involving two or more cities. When people are frightened, as they have been in the wake of recent terrorist attacks abroad and here, the smooth exercise of authority has a calming effect. Disorganization and disunity foster in the minds of the public lack of confidence in government, uncertainty and fear.

Jenkins is the senior adviser to the president of the nonprofit RAND Corporation and was the author of the Goldenrod exercise. Daddario, a former federal prosecutor, served as the New York Police Department's deputy commissioner for counterterrorism.

This commentary originally appeared on The Hill on December 23, 2015. Commentary gives RAND researchers a platform to convey insights based on their professional expertise and often on their peer-reviewed research and analysis.