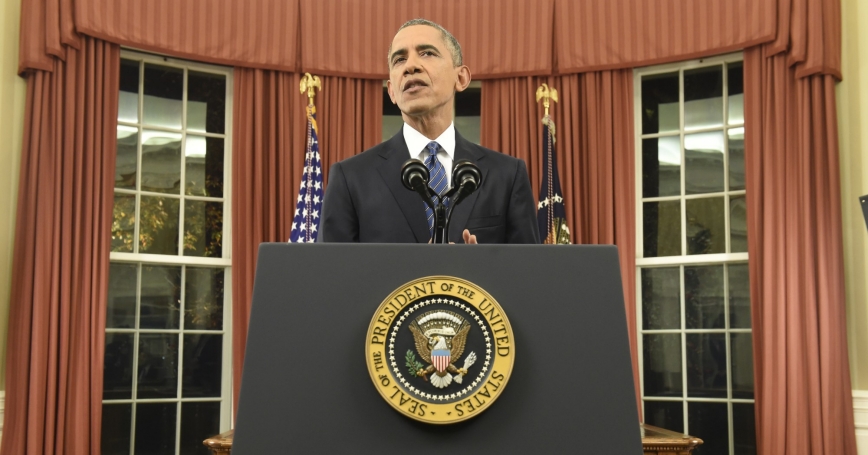 President Barack Obama speaks about counterterrorism and the U.S. fight against the Islamic State, December 6, 2015

Dressed in combat gear, a married couple allegedly carried out the bloodiest terrorist attack on US soil since 9/11 last Wednesday at a social services center in San Bernardino, California. While the husband was born in Chicago, his Pakistani wife had gained entrance to the United States through a “fiancee visa” — also known as a K-1 visa — to marry him.

In a televised speech on Sunday evening designed to reassure Americans, US President Barack Obama said that he ordered the Departments of State and Homeland Security to review “the visa waiver program under which the female terrorist in San Bernardino originally came to this country” and called for Congress to “put in place stronger screening for those who come to America without a visa” under the visa waiver program. (The White House clarified after the speech that the woman had not entered the US through the visa waiver program).

The fear that terrorist operatives might infiltrate the United States has led American authorities to look for any holes in US defenses — including, of late, the aforementioned visa waiver program, which allows citizens of 38 participating countries to enter the US without visas (though not without scrutiny) and stay for up to 90 days for tourism, business or while in transit to Canada or Mexico. The K-1 visa has a similar time constraint, requiring the couple to marry within 90 days; like all other applicants not eligible for visa waiver, such applicants must be interviewed in person.

The real threat to America, however, appears to be less one of infiltration and more one of inspiration. The Isis radio station released a statement on Saturday claiming that two of the group's followers had carried out the attack in San Bernardino — but, although the federal investigation continues, thus far there appears to be no evidence of direct involvement by the Islamic State. That Isis applauded the shooters does not mean that it directed the attacks or even actively recruited the attackers.

Despite being the focus of renewed scrutiny, only three people involved in terrorist incidents have entered the US via the visa waiver program in the past quarter-century. All three cases involving the visa waiver program could have had disastrous consequences, but intelligence and a bit of luck intervened. And, there have been none since cooperation among intelligence agencies around the world was increased and visa-waiver requirements were strengthened following the attacks of 9/11.

Ahmed Ajaj, a terrorist operative trained in explosives, flew into the United States in 1992 using a Swedish passport that had been crudely altered. When immigration officials searched his luggage, they found two other passports. He served six months in jail for altering his passport, but continued to keep in contact with Ramzi Yousef, who eventually served as the mastermind of the 1993 World Trade Center bombing. Yousef had been on the same flight as Ajaj, and entered the US on an Iraqi passport before claiming asylum. Ajaj was released from jail days after the trade center bombing, but was rearrested and convicted of his involvement in the plot.

The second visa waiver terrorism case involves the so-called 20th 9/11 hijacker, Zacarias Moussaoui, a French citizen. Despite reportedly being on a French watch list for suspected involvement in terrorist activities, he was granted a visa waiver and allowed to enter the United States. While taking flying lessons, he aroused suspicion and was detained on immigration charges weeks before 11 September and was incarcerated at the time of the attacks.

Finally, a British citizen, Richard Reid — now forever known as the “shoe bomber” — was granted a visa waiver and allowed to board an airplane in Paris headed to the United States in late December 2001. His passenger profile and behavior at the airport attracted the attention of airline security officials, who prevented him from boarding. Later questioned and cleared by French authorities, Reid boarded the same flight the following day, but failed at his mission when the explosives in his shoes failed to detonate.

The total number of those arrested in Islamic extremist terrorist plots in the United States is relatively low. Al-Qaida's long campaign to inspire Americans to carry out attacks in the US produced meager results; the Islamic State has effectively used social media to reach a larger and younger audience, and it has lured more Americans abroad, but like al-Qaida, it has persuaded very few of its fans to carry out attacks. The rampage in San Bernardino is a deadly exception.

And, foreign participants in terrorist conspiracies commonly entered the United States by obtaining ordinary visas for tourism, business or student purposes, rather than through the visa waiver program. Since 9/11, there have been eight known entries for such purposes — approximately one every two years — making it appear that the procedures governing visa approval for non-visa waiver applicants are not necessarily any better than those in place for granting visa waivers.

Moreover, strengthening visa waiver program requirements would greatly increase the workload for processing visas, which could potentially degrade the quality of all interviews. Nearly 10m non-immigrant visas were issued in 2014, so even spending a few minutes with each applicant would require significant reinforcements to the consular corps — and there's no evidence that it would necessarily make Americans any safer.

The majority of terrorist conspirators arrested or killed in the US during the last 25 years were already here; 96 of them were US citizens, another 19 were legal permanent residents. In other words, at least 86% of them radicalized after they came to the US. They did not need to travel here and they needed no documentation; they were Americans.

In some respects, identifying terrorist operatives overseas and preventing them from coming here is the easy part. Identifying the enemies already here may be the bigger challenge.

Brian Michael Jenkins is a senior adviser to the president of the nonprofit, nonpartisan RAND Corporation and author of numerous books, reports and articles on terrorism-related topics, including the report “Will Terrorists Go Nuclear?”

This commentary originally appeared on The Guardian on December 7, 2015. Commentary gives RAND researchers a platform to convey insights based on their professional expertise and often on their peer-reviewed research and analysis.