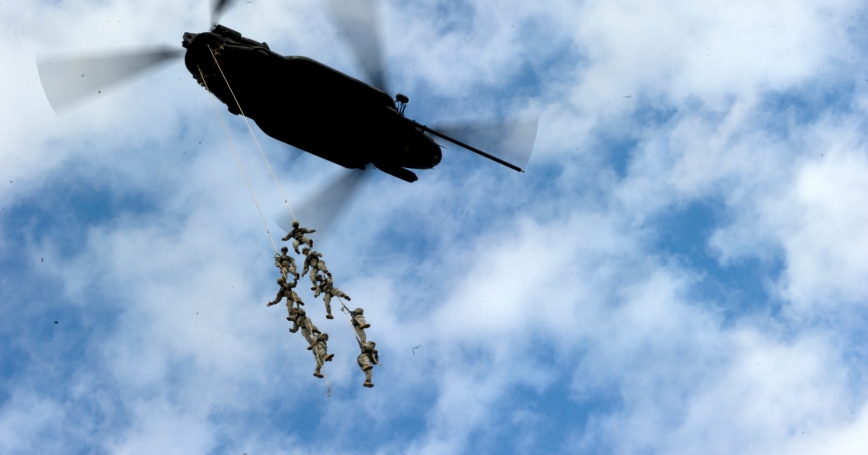 Soldiers from 7th Special Forces Group (Airborne) are suspended by a CH-47 Chinook helicopter during a training event Eglin Air Force Base, February 5, 2013

With Defense Secretary Ash Carter's announcement in early December that a special operations “expeditionary force” will be deployed to Iraq, a new phase of the effort to defeat the so-called Islamic State (ISIS) has begun. The special operators will be authorized to conduct raids in Iraq and Syria, and their activities will remedy one of the most critical gaps in the campaign to date—intelligence. By conducting raids, as special operators did in May when they killed Abu Sayyaf, an ISIS leader who had helped manage its oil and gas sales, they can gain troves of intelligence through interrogation of captured ISIS fighters and off of their phones, computers, and other possessions. This type of “sensitive site exploitation,” as it is called, involves rapid processing by intelligence analysts, which, during the heyday of the surge in Iraq, enabled operators to conduct up to 17 raids a night.

The raids and follow-on exploitation will significantly increase pressure on the ISIS network by leading to the targeting of top and mid-level leaders, couriers, and the facilitators that procure and distribute the fuel, ammunition, fighters, and other inputs that fuel the war effort. However critical to the fight against ISIS, though, using special operations forces for raids represents only half of the needed military adjustment.

The other half is the effort to build indigenous forces capable of taking and holding territory in Iraq and Syria. Over the past year, out of a desire to limit the U.S. involvement, too little equipment has been supplied to willing fighters, and advisors have been restricted to top headquarters commands and a few geographic areas. Although the Iraqi army has a long way to go, other security forces, such as Iraq's Counter-Terrorism Service (CTS), have been part of the fight since the beginning but have been starved for resources and sufficient advisory support.

In Syria, very tight vetting criteria, constraints on advisory support, and a hodgepodge approach to indigenous forces severely limited the effectiveness of allied local forces. For example, to receive training and equipment, Syrian volunteers had to pledge to fight only ISIS and not Assad, and the question of providing air cover was not resolved until the recruits came under fire. The United States and its partners also supported different anti-ISIS forces without requiring them to unify. Although the Syrian Kurd People's Defense Units have been an important part of the fight in Syria, the focus must shift to backing Arabs, Druze, and other Syrians as well. That will help peel support away from extremist factions such as the al Qaeda-linked Jabhat al Nusra.

Ramping up these two military efforts would in turn enhance the political leg of the U.S. strategy in Iraq and Syria. By providing more robust advisory and material support to the Haider al-Abadi government in Iraq, the United States could increase its leverage to better compete with Iran for influence in Baghdad. Shia and Kurds will not be able to pacify Iraq's Sunni areas without Sunni help. A combination of forces recently retook Baiji oil refinery in central Iraq, after more than a year of seesaw fighting. It seems that no single force in Iraq can make gains against ISIS, but together, a number of them can.

For example, visiting Iraq earlier this year, I saw how the CTS, led by a Shia general, Taleb al-Kenani, had successfully put together an effective force of Shia, Sunni, and Kurdish Iraqis. As Kenani told me, “We are all Iraqis here. This is our primary criteria for selection.” The Iraqi military must focus on the same principle if Iraq is to remain a united state, and the CTS suggests one possible model as to how this might be accomplished.

In Syria, ramping up support to U.S. allies on the ground would have a similarly salutary effect on U.S. Secretary of State John Kerry's diplomatic initiatives. Such support would set the table for more favorable negotiations over the fate of the Assad regime and the prospects for eradicating ISIS in Syria. Sustained military aid to indigenous Syrian forces would signal to Assad and his Russian and Iranian backers that the United States is not prepared to stand by while they wipe out Syrian opposition fighters in the populated western corridor from Damascus to Aleppo. The United States and its partners have supported those fighters in the past; to abandon them now would signal weakness to Putin.

Further, the United States should set a clear requirement for the negotiations: a timetable for transition and elections. A timetable would allow Iran and Russia a route to pursue their interests—a cheaper one than indefinitely propping up the gravely weak Assad regime. Assad's ground force has crumbled, and he is heavily reliant on Iranian-led militias, Lebanese Hezbollah, and Iraqi militias. Neither Russia nor Iran want to commit large numbers of ground forces to prop up Assad—and this is leverage the United States must use at the bargaining table.

Finally, the United States must be willing to walk away from a bad deal. It frankly does not need Russia to defeat ISIS: it has allies willing to use their precision bombs to strike at the group in targets in Syria—as of December 3, the British have joined this effort. In other words, Russia's relatively imprecise bombs, which are increasing civilian casualties, are more a liability than a help.

Washington has adopted the right strategy: developing and supporting competent Iraqi and Syrian ground forces is the only way to defeat ISIS. The problem is that this strategy has not received the resources and attention it deserves. Obama has recently pledged to accelerate and intensify the campaign, but those efforts will fail if they are applied incrementally. It is time to ramp up on multiple fronts. The West has suffered the effects of slow progress, and now it is time to get in gear.

Linda Robinson is a senior international policy analyst at the nonprofit, nonpartisan RAND Corporation. Her research focuses on special operations forces and ISIL.

This commentary originally appeared on Foreign Affairs on December 7, 2015. Commentary gives RAND researchers a platform to convey insights based on their professional expertise and often on their peer-reviewed research and analysis.