Obama Doubles Down on Maritime Capacity Building in Southeast Asia 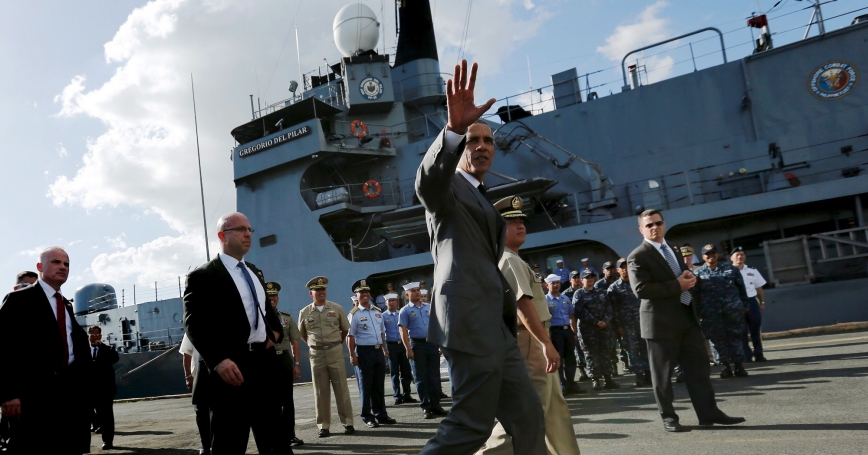 U.S. President Obama departs after his remarks and a tour of the Philippine Navy's BRP Gregorio Del Pilar at Manila Harbor, Philippines, November 17, 2015

A significant but under-appreciated component that has emerged from the U.S. “rebalance” to Asia has been maritime security capacity building efforts in Southeast Asia. Such efforts came into focus briefly when Secretary of State John Kerry announced the “Southeast Asia Maritime Law Enforcement Initiative” in December 2013, which committed $25 million in U.S. government funds to train, equip, and provide facilities to maritime law enforcement agencies of Indonesia, Malaysia, the Philippines, and Vietnam. At the time, the initiative was lightly covered in the press and quickly forgotten.

It took November's high-profile visit by President Barack Obama aboard the Philippine Navy flagship vessel Gregorio del Pilar in Manila and the subsequent announcement of an additional $250 million in U.S. aid to the region — to include the transfer of a U.S. Coast Guard Cutter and naval research vessel — for the issue to garner the attention it deserves in the media. With this recent announcement, the United States is positioning itself as an indispensable contributor to maritime capacity building and has become the largest and most important partner in coast guard capacity building in the region.

The U.S. aid package comes at a particularly opportune time for the region. Archipelagic states such as Indonesia and the Philippines increasingly view with alarm efforts by the Chinese Coast Guard to assert sovereignty over disputed territory in the South China Sea and seek to bolster their own maritime law enforcement fleets to counter the threat. The United States is thus filling a major need for many countries during a time of uncertainty regarding Chinese actions in the region.

The $250 million aid package will provide training, infrastructure construction, and vessels and other assets to bureaucracies charged with maritime security in the Philippines, Vietnam, Malaysia, and Indonesia. According to the White House Fact Sheet released in tandem with Obama's visit to the Philippines, the capacity building efforts aim to help countries “respond to threats in waters off their coasts and to provide maritime security more broadly across the region.” The Fact Sheet emphasizes the “software” component of capacity building to “strengthen institutions and enhance practical skills to develop sustainable and capable maritime forces.” Such an emphasis represents an important recognition that human capital needs to remain just as important as hardware within many of these countries.

The aid package builds upon the 2013 initiative but goes several steps further in enhancing capabilities. First, the United States will transfer two large capacity vessels to the Philippine Navy: a high-endurance U.S. Coast Guard Cutter, USCG Boutwell, and a naval marine surveillance and survey vessel, the R/V Melville. The two vessels will nearly double the number of operational high-endurance and large tonnage vessels in the Philippine Navy fleet, and significantly increase its capacity to patrol its exclusive economic zone. The transfer is a major gain for Philippine maritime security as a whole, especially since the Philippine Coast Guard lacks any high endurance cutters of its own. The remaining $79 million in funds is to be allocated for building training and logistical bases for the Philippine Navy, Coast Guard, and Air Force, as well as to hold “increased and more complex exercises and training with U.S. government agencies and U.S. Pacific Command to increase interoperability and professionalization.”

Second, as part of a $40 million aid package to Vietnam over two years, the United States will lift the ban on sales of “maritime-related lethal capabilities” to Vietnam. This presumably would pave the way for the United States to sell arms for deployment on Vietnamese Coast Guard and maritime law enforcement vessels, for example. The move marks a significant thaw in relations and builds on the two sides' landmark 2011 Memorandum of Understanding and 2015 “Joint Vision Statement” between the U.S. Department of Defense and Vietnamese Ministry of National Defense to enhance defense exchanges and capacity-building. During the signing of the 2015 “Statement,” Secretary of Defense Ash Carter also pledged $18 million to the Vietnamese Coast Guard to purchase U.S.-made Metal Shark patrol vessels.

Finally, a heavy emphasis was given to increasing personnel training; intelligence, surveillance, and reconnaissance integration; and inter-agency coordination among all four recipient countries. Inter-agency coordination is a major issue among all maritime law enforcement agencies in the region, but it is particularly daunting for Indonesia, which is to receive $21 million over two years as part of the package. With 17,000 islands and over 54,000 kilometers of coastline, Indonesia has a vast maritime domain to defend and patrol, and has recently created a supra-bureaucracy called the Maritime Security Agency, or BAKAMLA, to integrate over a dozen maritime law enforcement actors. The consolidation process has proven difficult, however, with vested interests and structural inefficiencies forestalling progress. Thus, U.S. assistance that promotes inter-agency coordination will go a long way towards streamlining Indonesia's maritime agency reforms.

Non-military maritime security and law enforcement capabilities are increasing in significance as countries in the region seek to bolster maritime domain awareness and protect vital marine resources from exploitation. They provide increased presence in contested waters and around maritime features in the South China Sea to counteract concerns over increasing assertiveness and quantitative advantages of China's coast guard vessels in the region. China's use of its coast guard as an instrument of statecraft designed to coerce rather than carry out law and regulations enforcement at sea has fundamentally altered security perceptions in the region. Countries are now compelled to develop their own coast guards, as opposed to navies, to counterbalance China, yet many lack the funds to do so adequately.

By contributing to coast guard capacity building by donating ships and funding, the United States has found an important and politically viable avenue to bolster maritme security to partners and allies in the region. The United States' recent aid package signals a desire among U.S. policymakers to widen its strategic involvement in the region but in a manner that is not overtly confrontational with China. The package will open the door for deeper engagement with coast guard fleets in Southeast Asia going forward.

Lyle J. Morris is a project associate at the nonprofit, nonpartisan RAND Corporation.

This commentary originally appeared on Asia Pacific Bulletin on December 15, 2015. Commentary gives RAND researchers a platform to convey insights based on their professional expertise and often on their peer-reviewed research and analysis.