The U.S. Needs to Exercise Leadership at the Biological Weapons Convention 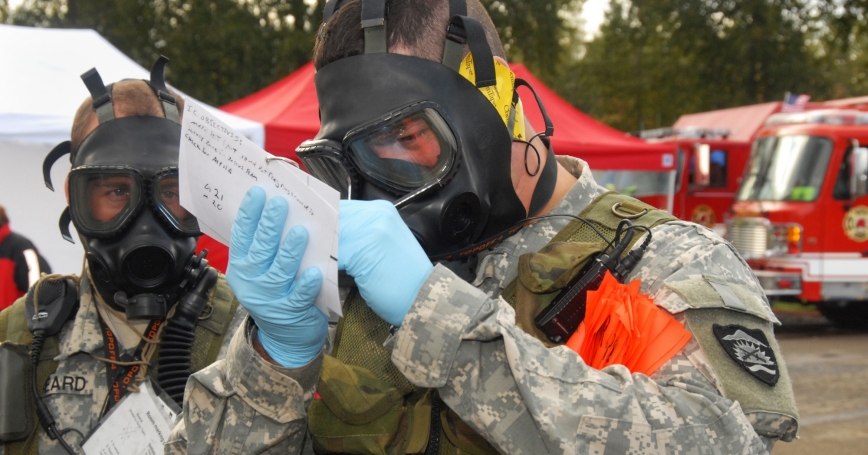 Two Oregon Army National Guard members make notes from the edge of the blast zone after a simulated dirty bomb detonated during an exercise in Portland, October 16, 2007

Arguably one of the greatest threats facing humankind is the deliberate use of biological pathogens to attack populations. Estimates of casualties from such an attack vary widely, yet numbers in the hundreds of thousands killed or infected are certainly considered possible. For the past 40 years, the Biological Weapons Convention has served as an international norm against the use of such weapons. Yet failure to exercise leadership in the convention places U.S. interests at considerable risk.

The Biological Weapons Convention was the first arms-control treaty to ban an entire class of weapons, entering into force in 1975. It calls for prohibitions on the “development, stockpiling, acquisition, retention, and production of biological agents and toxins of types and in quantities that have no justification for prophylactic, protective or other peaceful purposes.” The convention includes review conferences held every five years to discuss the state of the treaty.

One year from now, the Eighth Review Conference will be concluding. It could be the Obama administration's final major foreign policy opportunity and could serve as an important bookend for this critical issue. Interestingly, when President Obama took office in 2009, his first major presidential policy directive after assembling his national security council was the Implementation of the National Strategy for Countering Biological Threats.

This strategy was released early in the administration — over a year before the Seventh Biological Weapons Convention Review Conference took place in 2011 — in hopes of framing United States preparedness and response capacity against biological events, either naturally occurring or manmade, and providing goals for the upcoming review conference. Unfortunately, neither outcome was fully achieved.

There have been ample warnings of the potential for catastrophic biological events in the nearly 15 years since the anthrax attacks of 2001, and several key events highlight U.S. shortfalls in this area. Yet presidential directives from both the George W. Bush and Obama administrations have at best been only partially implemented. The last major comprehensive government review of the issue in 2004 — Homeland Security Presidential Directive-10, Biodefense for the 21st Century — falls into this category. The 2008 Graham-Talent report by the Commission on the Prevention of Weapons of Mass Destruction Proliferation and Terrorism and the 2015 Blue Ribbon Panel on Biodefense, co-chaired by former Sen. Joe Lieberman and former Department of Homeland Security Secretary Tom Ridge, warned of the consequences of a lack of preparedness and response capacity. The 2009 H1N1 influenza outbreak and the recent Ebola outbreak centered in West Africa clearly demonstrated national and global shortfalls in biodefense.

To be fair, both administrations made efforts to improve biodefense capacity. Most recently, the Obama administration has put great effort into the Global Health Security Agenda, an international effort to improve the prevention, detection and response to infectious disease threats in partner nations. These efforts have had important outcomes, both in improving global public health and providing modest gains in preparedness against the use of biological pathogen weapons.

Yet over the course of almost 15 years, an interesting outcome has occurred. The focus has tended to drift away from concerns about the deliberate use of biological pathogens and toward public health efforts directed mostly at naturally-occurring disease threats — such as pandemic influenza H1N1, Middle East Respiratory Syndrome and Ebola. Fears of a potential deliberate biological attack have subsided somewhat.

In doing so, authorities may have lost sight of the fact that properly prepared biological weapons do not act as naturally occurring disease. In fact, biological pathogens could be prepared and deployed so that resulting infections have barely any semblance to the natural forms of the diseases. Overwhelming doses at the point of attack, and even at long distances downwind, as in the case of an aerosol delivery, could be thousands of times the “lethal dose.” In such cases, the resulting disease could be so severe that even medical countermeasures such as vaccines, antibiotics and antivirals could be rendered ineffective. This shifting emphasis can also be seen in the changing language in the three documents cited above which show the progression from biological warfare and attacks in Homeland Security Presidential Directive-10 to a more nuanced approach to biodefense, which includes both deliberate attacks and naturally occurring disease in the Lieberman-Ridge report. It is these deliberate uses of pathogens that are the focus of the Biological Weapons Convention.

The Seventh Review Conference in December 2011 was disappointing, as essentially the status quo was maintained. Little consensus was gained on key issues. Countries consistently fail to report their biological activities as called for in the “voluntary” annual confidence-building measures. Even small measures such as increasing the size of the Biological Weapons Convention implementation support unit above the current staff of three failed to gain traction. Just over one-third of member nations had national laws on biological warfare prevention issues as called for in the convention, not a great record of compliance. No progress was made on the vexing issue of verification, which a growing majority of Biological Weapons Convention nations support, including some close U.S. allies, yet the United States strongly opposes.

Meanwhile, five years have gone by and the pace of biotechnology has continued to expand exponentially. The first synthetic cell has been developed. New tools have revolutionized the process of gene editing and synthesis. Advances in bioinformatics and nanotechnology have moved biotechnology from art and science to industrial and engineering processes. The cost of biotech equipment continues to go down and processes that were only a decade ago worthy of a Nobel Prize are now routinely used in labs and even in secondary schools.

Biological warfare can no longer be considered the purview of only state actors. And this democratization of biotechnology means that the world is literally one rogue microbiologist away from a potentially devastating biological attack. Imagine a group like the Islamic State group with the capability and intentions of employing large-scale biological weapons.

So that brings us back to the Eighth Review Conference. What are the U.S. goals for the negotiation? What will success look like? What initiatives can be incorporated into the Biological Weapons Convention to reflect the changes that have occurred in biotechnology both in terms of availability and capability?

The time to deal with these issues is now. The United States should clearly establish its goals and objectives in this new and evolving environment and build coalitions to help meet them. A successful review conference is critical to promoting global preparedness and response capabilities against a potential biological warfare attack, either from a rogue state or a bioterrorist.

This commentary originally appeared on U.S. News & World Report on December 23, 2015. Commentary gives RAND researchers a platform to convey insights based on their professional expertise and often on their peer-reviewed research and analysis.