To Undermine ISIS, We Should Welcome Syrian Refugees 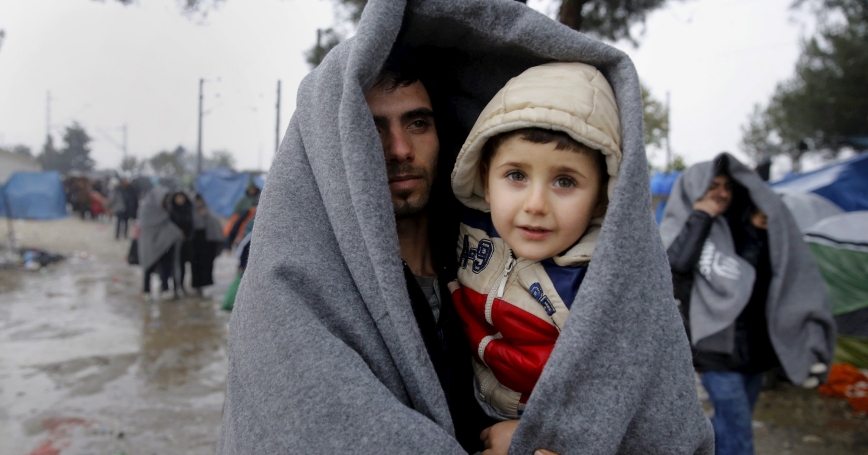 A Syrian refugee carries his son through a rainstorm at the Greek-Macedonian border near the Greek village of Idomeni, November 27, 2015

by Kim Cragin and Ben Connable

It will take some time to parse all of the events in the Paris attacks, but reporting indicates that at least one of the suicide bombers used a stolen Syrian passport and followed the refugee path to France via Turkey and Greece.

This one attacker now has politicians on both sides of the Atlantic calling for moratoria on Syrian refugee programs.

We argue that the opposite approach—taking in even more Syrian refugees—is not only humane but could bleed the Islamic State militant group (ISIS) dry and deliver the kind of “strategic messaging” victory sought by the U.S.-led coalition.

The United Nations has registered 4.3 million refugees from the conflict in Syria and an additional 370,000 from Iraq. Approximately 123,000 of these refugees have sought asylum in Europe. Together, Canada and the United States have taken in about 5,400.

The international media have documented their journeys. These refugees have risked hypothermia, starvation and death. Families have been separated, and many loved ones have been lost. Yet they keep leaving their homes in search of a safer, better life.

These people deserve compassion for what they have experienced and admiration for their bravery. Of the 123,000, just one has so far been implicated in an attack.

The humanitarian crisis, by any measure, outweighs the risk. But that was known before the attacks in Paris. The challenge is that these attacks have increased pressure on government officials to do more. The calls for action are drowning out the cries for compassion. Instead of blocking Syrian refugees, more should be done. Taking in more Syrians could help defeat ISIS.

After all, what good is an Islamic caliphate if nobody wants to live there? The primary draw of ISIS for supporters inside Syria, Iraq and elsewhere is its declaration of an Islamic caliphate in June 2014. Soon thereafter, 35 extremist groups based in Egypt, Libya, Nigeria, Afghanistan, Pakistan, the Caucasus, Somalia and so on declared the creation of outlying ISIS “provinces” in their countries.

ISIS leaders have called on Muslims worldwide to migrate to these areas and take up residence in the true caliphate. But approximately 60 percent of Syrian and Iraqi refugees, according to the United Nations, are fleeing ISIS territory. Fewer and fewer people want to live in their caliphate.

ISIS leaders apparently have noticed and are worried about this reality. Over the past several months, they have released statements urging, cajoling and even demanding that the refugees return to Syria and Iraq. Unfortunately, some recent reports show that internally displaced persons in Syria are moving to ISIS's de facto capital, Raqqa, to avoid more intense ground fighting elsewhere.

This trend could be reversed by offering these people a viable alternative outside of Syria. Perhaps the best way to destroy ISIS is to strip it of its most precious commodity: people.

Facilitating the outflow of refugees leaves ISIS with fewer people to tax, control, torture, rape, or press-gang into military service. Fewer people means fewer ways to hide from coalition airstrikes and, potentially, from a coalition or coalition-supported ground invasion.

Facilitating the outflow of refugees leaves ISIS with fewer people to tax, control, torture, rape, or press-gang into military service.

Perhaps most important, as people flee and entire caliphate neighborhoods empty out, it will become increasingly difficult to sell the ISIS narrative either in videos or to new recruits who will arrive in places like Raqqa or Mosul, Iraq, to find them devoid of life.

Without people there can be no ISIS caliphate. Without ISIS, the refugees are just desperate, destitute people who need help.

Palestinians are now among the most successful businesspeople in Jordan, and they serve honorably in the armed forces. The Syrian refugees who fled the Hama massacres in 1982 are now flourishing as Jordanian citizens. Iraqis who migrated to Jordan in the early 1990s generated an economic boom in the capital, Amman.

And while the nearly 700,000 Syrian refugees in Jordan lead mostly uncertain lives, they have not yet posed any threat to the country or its government. Syrians are generally well-educated, technically competent and entrepreneurial; they offer many benefits to any host nation.

If politicians and policymakers truly want to undermine ISIS and reduce any perceived threat from Syrian refugees, they should advocate that the United States take in more refugees, perhaps even more than the 65,000 suggested by the International Rescue Committee two months ago. This effort should be carefully planned and executed to ensure they are welcomed, cared for and, as necessary, assimilated into the American melting pot.

More immediately, the United States should dramatically expand its already generous aid programs to support Syrian refugee operations in Jordan, Lebanon, Turkey and now in Europe. If nothing else, the United States can provide an absolute good by helping Syrian families in need while aiding allied states that are now bearing the brunt of the refugee crisis.

The alternatives to assisting and accepting Syrian refugees are counterproductive both to U.S. foreign policy and to more immediate physical security concerns. Forcing Syrian refugees to remain in ISIS-held areas, or drifting from border to border, or huddled in dusty, hopeless refugee camps will increase ISIS's recruiting pool and undermine all efforts to stabilize the Middle East.

Rejecting Syrian refugee families could undercut efforts to engage with moderate Muslims and increase anti-American sentiment in the Middle East and Europe. Over time, rejection of Syrian refugees is likely to increase rather than decrease the threat of terrorism.

The Paris attacks have provided a brief window of opportunity to demonstrate that America remains the “shining city on the hill” for the world's poor, tired and huddled masses. Demonstrating American goodwill to Syrian refugees is the best way to help defeat ISIS and rehabilitate America's image in the chaotic Middle East.

Kim Cragin is a senior political scientist whose work focuses on terrorism-related issues at the nonprofit, nonpartisan RAND Corporation. Ben Connable, a former Marine who served in Iraq's Anbar province, is a senior international policy analyst at RAND.

This commentary originally appeared on Newsweek on December 2, 2015. Commentary gives RAND researchers a platform to convey insights based on their professional expertise and often on their peer-reviewed research and analysis.