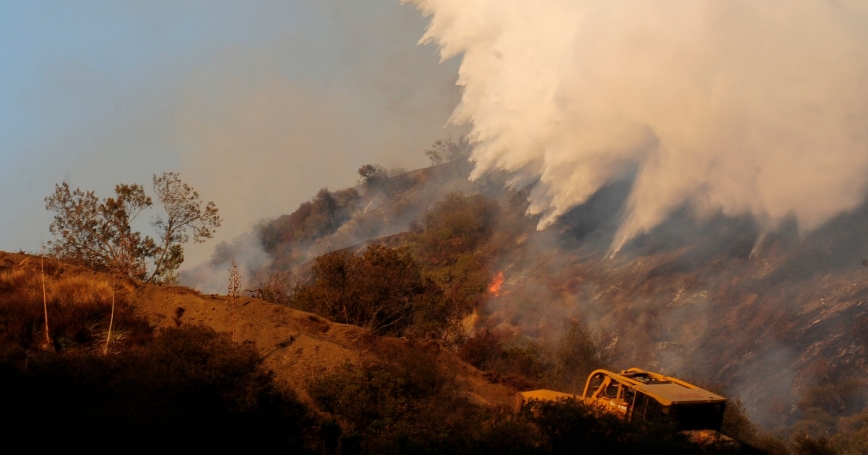 A 40-acre fire east of the Sepulveda Pass in Los Angeles, California

As 2015 winds to a close, many Californians will remember it as the year wildfires consumed hundreds of thousands of acres and left countless people homeless. But the danger from a wildfire doesn't end when the last flame goes out. It threatens the health of those who've witnessed the embers burning, as well as the well-being of people who might live hundreds of miles away.

The potential for smoke to harm air quality and cause health problems was especially acute this year because a record number of wildfires broke out in the United States. More than 55,000 wildfires burned over 9.8 million acres in 2015, according to the National Interagency Fire Center. This is only the fourth year since 1960 that more than 9 million acres — an area about twice the size of New Jersey — have burned. Each of those four record wildfire years occurred during the last 10 years.

Evidence indicates that rising temperatures and severe drought have contributed to more active and lengthier wildfire seasons, which typically stretch from spring into fall. The number of wildfires in the West that have burned more than 1,000 acres has increased by a rate of seven fires a year from 1984 to 2011, according to a 2014 study. In 2015, more than 8,100 wildfires burned nearly 825,000 acres in California, according to the California Department of Forestry and Fire Protection. About 500,000 acres burn in a typical year.

Over the summer, smoke from fires in the Northwest blanketed much of the western third of the United States and traveled as far east as Wyoming. Smoke from large wildfires in Canada and Alaska traveled thousands of miles and poured into Montana and the Dakotas.

When a wildfire occurs, another striking development can accompany it. Visits to emergency departments and hospitals for respiratory illnesses often spike — an increase that can last one to two weeks after the fire has been contained, according to research.

Air pollution from wildfires may also increase risk of cardiac arrests and other sudden acute heart problems, concluded a Journal of the American Heart Association study in July. Researchers found that fine particulate matter air pollution — one culprit is burning wood — often exceeded recommended air-quality limits during and after wildfires. The particles may act as a trigger that sets off an acute cardiovascular event. A 2012 study in the Journal of Forest Economics linked the cardio-respiratory deaths of more than 130 people in Southern California to the wildfires that ravaged the region.

Steps can be taken to minimize exposure to wildfire smoke. Those having trouble breathing should consider evacuating the area, the Centers for Disease Control and Prevention advises. Other CDC tips: Monitor local air quality by watching for news or health warnings about smoke; keep indoor air as clean as possible by keeping the windows closed and running an air conditioner if possible; and avoid activities that stir up indoor air pollution, such as making a fire in the fireplace or operating a vacuum cleaner.

These recommendations are particularly relevant to those with pre-existing heart and lung conditions and to older adults, who may be more susceptible to smoke because of increased risk of heart and lung disease. But the advice also applies to children, whose smaller bodies can absorb more of a contaminant, and to pregnant women, whose developing babies could be harmed by the pollutants.

Public advisories are only as good as the compliance that comes with them. One way to improve them would be to incorporate better data on the trajectories of smoke plumes into health advisories, which would result in a more targeted and helpful alert. This knowledge, coupled with simple actions like having an adequate supply of food and medications on hand, could cut down on the need to venture outside, and therefore decrease exposure to toxic pollutants.

Coping with a wildfire can cause feelings of helplessness. However, pre-event preparedness can go a long way toward protecting public health. Agencies could conduct higher profile pre-wildfire season publicity campaigns that highlight the health risks of wildfire smoke as well as the steps each household can take to be prepared — before wildfire season begins all over again.

Jaime Madrigano is an associate policy researcher at the nonprofit, nonpartisan RAND Corp.

This commentary originally appeared in Orange County Register on December 26, 2015. Commentary gives RAND researchers a platform to convey insights based on their professional expertise and often on their peer-reviewed research and analysis.