Will Syria's Civil War Turn Out Like Spain's Did? 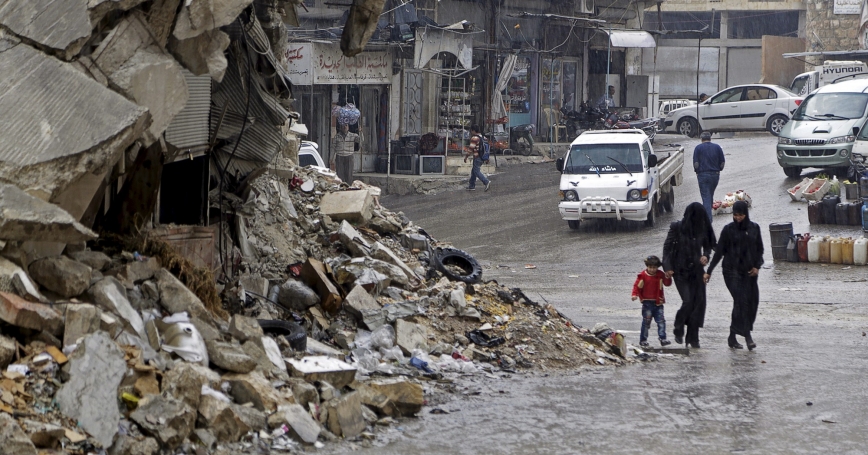 Civilians walk past a damaged building in the rebel-controlled area of Maaret al-Numan town in Idlib province, Syria, October 28, 2015

The civil war that has consumed Syria for nearly five years contains echoes of an earlier conflict at the opposite end of the Mediterranean. The similarities between the Syrian and Spanish civil wars suggest that the Syrian war, like the Spanish one before it, could potentially foreshadow future conflicts.

A striking feature of both conflicts is the degree to which foreigners participated in other nations' civil wars. Volunteers from all over Europe and the Americas flocked to support the Republican (government) side in the Spanish civil war, which lasted from 1936 to 1939, just as volunteers from around the globe have joined any of various groups fighting against the regime of Bashar al-Assad in the Syrian conflict. The most famous such volunteer in the Spanish conflict was the British novelist/essayist George Orwell, who survived being shot in the throat, but thousands of others received training and experience in Spain before departing for their native countries or other lands. National militaries from Nazi Germany, fascist Italy and the Soviet Union also participated, often testing new tactics or weapons that they would go on to use at a later date.

Then as now, a key role for foreign militaries was in the air: Germany's bombing of Guernica, later immortalized by Picasso, was only one of a series of Luftwaffe actions during the war. The result of all this foreign involvement on both sides in Spain was that, just as in the Syrian civil war, governments intervening in the conflict sometimes found themselves at war with their own citizens on the other side. For example, Italian government forces under Mussolini's control sometimes found themselves fighting against Italian anti-fascist volunteers, just as Western powers and Russia sometimes target their own citizens fighting on behalf of the Islamic State. Another similarity of the two wars is that even as neighboring states have intervened relentlessly in the conflict, they have not sought to formally acquire territory from a state fractured by civil war.

Both the Syrian and Spanish civil wars involved multiple sides, rather than being a straightforward two-sided conflict along the lines of the U.S. Civil War. Syria today has a united government facing highly divided rebels, including Kurdish nationalists, moderate Islamists, al-Qaeda affiliates and Islamic State militants, many of whom fight each other more than they do the government. In Spain, the right-wing Nationalist rebels were united under Francisco Franco's leadership, but they faced an array of democratic and Marxist adversaries whose front was often far from united. Then as now, regional desires for autonomy or even independence played a role in the conflict. Like the Syrian Kurds today, Spain's Basques and Catalans recognized the potential for both opportunities and threats from the ongoing conflict.

Another similarity is in the level of brutality against civilians and captives. Some of this was due to the particular nature of the actors in both conflicts, but it also reflects the especially harsh nature of civil wars. Whereas a soldier fighting another state may grudgingly respect his adversaries — reflecting that they are fighting for their country, just as he is fighting for his — war against one-time compatriots is embittered by a sense of betrayal. In such situations, prisoners of war are particularly likely to be massacred, as are civilians who are perceived as supporting the other side.

It is unclear how the civil war in Syria will close. We do know that the war in Spain ended with four decades of oppression under Franco, as well as the displacement of millions of Spaniards abroad. Moreover, the war in Spain has been retrospectively called a “dress rehearsal” for World War II, in which fascists, republicans and Marxists of various stripes explored the new technologies and tactics that would shape the latter war. Whether the war in Syria contributes to a larger conflagration, or merely to refinement of individual and national capabilities for use in other contexts, remains to be seen.

Scott Savitz is a senior engineer with expertise in defense and homeland security analysis at the RAND Corporation.

This commentary originally appeared on The Washington Post on December 2, 2015. Commentary gives RAND researchers a platform to convey insights based on their professional expertise and often on their peer-reviewed research and analysis.