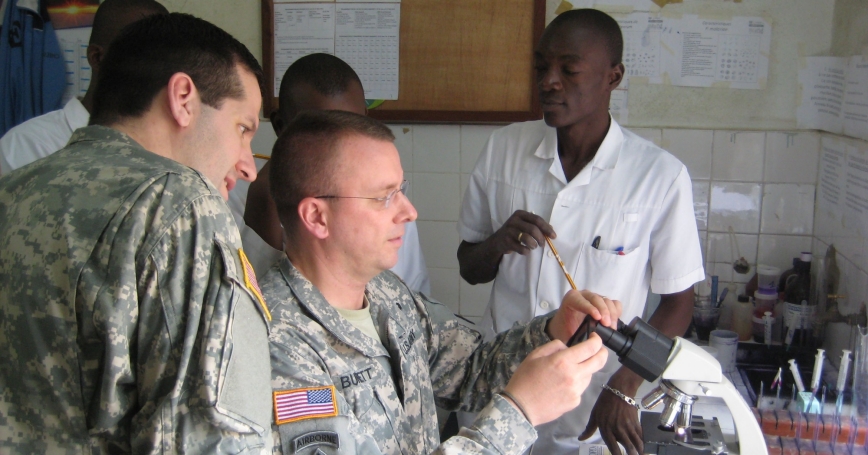 A demonstration on infectious disease identification and treatment from the Benin Armed Force in Contonou, Benin, January 2013

Advances in biotechnology have brought a wide range of benefits in health and medical research, food and agriculture, even manufacturing. At the same time, biotechnology is also advancing on a darker side, as biological weapons are now within the reach of many rogue nations and possibly some terrorist groups.

The deliberate use of biological pathogens to attack a major population center could kill or infect hundreds of thousands of people, yet report after report shows the United States to be ill prepared to address a threat that is only increasing as technology marches forward.

Most recently, the 2015 Blue Ribbon Panel on Biodefense, co-chaired by former Sen. Joe Lieberman and former Department of Homeland Security Secretary Tom Ridge, warned that “the United States is underprepared for biological threats.” The panel's report states that scientific advances have “expanded the number and types of potential biological weapons and made it more difficult to fully comprehend the enormity of the threat.”

An earlier report, issued in 2008 by the Commission on the Prevention of Weapons of Mass Destruction Proliferation and Terrorism—also known as the Graham-Talent report—warned (PDF) that the “U.S. government needs to move more aggressively to limit the proliferation of biological weapons and reduce the prospect of a bioterror attack.”

For the past 40 years, the Biological Weapons Convention (BWC) has served as an international norm against the use of such weapons. Later this year, the Eighth Review Conference or BWC RevCon will be convened, offering the United States an opportunity to exercise new leadership on the issue.

Since 2001, when the anthrax attacks brought the threat of biological terrorism to the headlines with the delivery of mail containing the deadly white powder, attention to the threat posed by biological weapons has tended to drift away from concerns about the deliberate use of biological pathogens and toward public health efforts directed mostly at naturally-occurring disease threats—such as pandemic influenza H1N1, Middle East Respiratory Syndrome and Ebola.

But properly prepared biological weapons do not act as naturally occurring disease; what may have worked in the fight against Ebola, for example, may have little effect against a weaponized, aerosol delivered variant of the disease. In fact, the history of the dismantled offensive U.S. biological weapons program demonstrates pathogens could be prepared and deployed so that resulting infections had barely any resemblance to the natural forms of the unmodified disease. Overwhelming doses at the point of attack, and even at long distances downwind, as in the case of an aerosol delivery, could be thousands of times the "lethal dose." In such cases, the resulting disease could be so severe that even medical countermeasures such as vaccines, antibiotics and antivirals could be rendered ineffective.

The BWC is designed to address such deliberate use of pathogens, but global compliance has been lacking. Little consensus was gained during the Seventh RevCon in 2011. Only one-third of the nations party to the BWC even submit annual “voluntary” reports on biological activities, and in one analysis only about one-third of member countries had enacted laws on biological warfare issues. Verification of the convention also remains a vexing issue.

All of this comes at a time when advances in biotechnological sciences could mean that a single rogue microbiologist could mount a potentially devastating biological attack. This democratization of biotechnology may already have brought biological attacks within the reach of terror groups like al Qaeda and ISIS.

Among the recent recommendations of the Blue Ribbon Panel on Biodefense, was that the United States reengage with the BWC at the next RevCon in December. The time to deal with these issues is now. The United States should clearly establish its goals and objectives and build coalitions to help meet them. A successful RevCon that reinvigorates the BWC could go a long way toward promoting global preparedness and response capabilities against a potential biological warfare attack, whether from a rogue state, a terrorist group, or a lone wolf microbiologist.

Daniel M. Gerstein works at the nonprofit, nonpartisan RAND Corporation. He was the Under Secretary (Acting) and Deputy Under Secretary in the Science and Technology Directorate of the Department of Homeland Security from 2011-2014. He is also the author of a book on the BWC, “National Security and Arms Control in the Age of Biotechnology: The Biological Weapons Convention.”

This commentary originally appeared on The Cipher Brief on January 17, 2016. Commentary gives RAND researchers a platform to convey insights based on their professional expertise and often on their peer-reviewed research and analysis.