Georgia Needs Support from the U.S. and the West 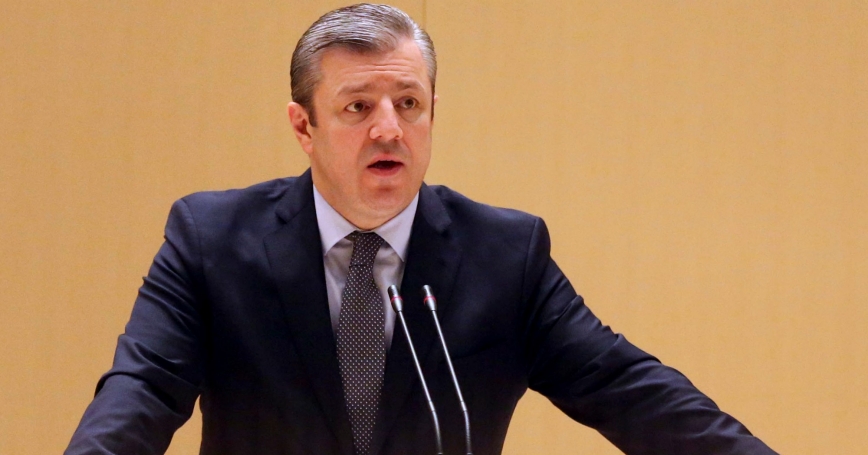 Georgy Kvirikashvili, who was nominated for the post of Georgia's prime minister on December 25 after Irakly Garibashvili resigned, delivers a speech on December 28, 2015

With a new prime minister in former foreign and economics minister Giorgi Kvirikashvili, Georgia has an opportunity to reinvigorate its democracy and economy. But two main challenges lie ahead for him: organizing free and fair parliamentary elections next October while reviving the fortunes of his Georgian Dream coalition, and stimulating the economy and foreign investment. Wedged in a troubled region, Georgia stands out as an emerging democracy. Although Middle East and Russia-Ukraine crises loom large, Western leaders cannot forget Georgia. It needs their support to deter risks and advance progress.

A respected technocrat, Kvirikashvili ought to advance reforms and strengthen governance. He is seen as able to work with political opponents and (unlike his troubled predecessor) with President Giorgi Margvelashvili. Kvirikashvili owes his position to billionaire Bidzina Ivanishvili, who funds the ruling Georgian Dream. By developing independent stature, Kvirikashvili can enhance his effectiveness.

The quality of elections in Georgia has improved, and next year's parliamentary balloting could help solidify democratic rule. The Organization for Security and Cooperation in Europe praised 2012 parliamentary and 2013 presidential votes while calling for better electoral conditions. Kvirikashvili should start now to work with all political forces to ensure that the October tally is fully “free and fair.”

Progress has been made in judicial reform, but political retribution and selective justice are concerns. Georgia could help allay them by inviting the OSCE's Office of Democratic Institutions and Human Rights to conduct an independent examination of criminal charges of misconduct in office against members of the government of former President Mikhail Saakashvili. The independence of the opposition-leaning Rustavi 2 television station must also be protected.

The surprise prime ministerial change seems designed to offer hope to uneasy voters. A November-December 2015 poll by the U.S. National Democratic Institute found that only 18 percent of respondents saw their country as going in the right direction. Economic conditions explain some of the disgruntlement. Four of the five top issues of concern to respondents were jobs, poverty, pensions and inflation. (The fifth was territorial integrity.) Only 18 percent of respondents saw Georgian Dream as their first choice to govern, and 14 percent favored the United National Movement, the ruling party during Saakashvili's presidency. Prior to the election, political parties may realign to bolster their prospects.

In recent years Georgia has made progress with its economy, a universal health care system, and roads, ports and infrastructure. Even corruption has declined; in 2013 when Saakashvili left office, Georgia was 55th on Transparency International's Corruption Perceptions Index (1st is least corrupt), versus 124th a decade earlier. Sensible policies – floating the lari, restraining budget deficits and improving tax collections – have brightened the economic outlook and increased resilience to external shocks. In 2015 Georgia attracted a record $1.7 billion in foreign direct investment, despite Russian security risks and deficiencies in the rule of law, particularly in protecting private property.

Living standards and job creation will be key issues in the October election. Although the economy is growing, about 2.5 percent this year, per capita income remains low. Last year it was $3,670, only one-fifth of the average level of the Baltic States. The poverty rate is worrisome – 41 percent in rural regions, according to the World Bank. And there are high rates of urban unemployment, especially among younger workers.

On an urgent basis, Kvirikashvili's government should forge a coherent, realistic program to address economic problems. This will help show that the authorities know how to move the country forward. To meet rising popular expectations, Georgia should further liberalize its economy and mobilize investment. Kvirikashvili seems to recognize this. He has said the “cornerstone” of his government's efforts would be to foster economic development, encouraging small business startups and the private sector and “maximally easing bureaucratic burdens for business.”

Georgia remains a target of Russian power ambitions. Moscow supports political forces in Georgia that tout “patriotism and nationalism” and oppose growing ties with the West. These forces have only modest popular support and do not threaten Georgia's Euro-Atlantic vector.

Europe and America are critical to Georgia. Brussels has approved visa-free travel for Georgians, a morale boost that will bring economic reward. The European Union Association Agreement, including a free trade accord, will reinforce Georgia's shift toward Europe. Harmonizing laws and regulations with the EU's will take most of a decade. The gains to Georgia of greater access to European markets will be considerable, despite short-term costs to some sectors. The EU must be prepared to help.

Georgia has provided troops for operations in Iraq, Afghanistan and now the Central African Republic. Georgia is upgrading its military capabilities, such as by buying new air defenses from France. But with one-fifth of its territory occupied by Russia and facing risks every day, Georgia needs more Western aid, including military training, technology and defensive arms.

Georgia is a former Soviet success story. The new prime minister should visit key Western capitals soon and be well received in them. The U.S. vice president or secretary of state should travel to Georgia this year to underline America's support for its security and westward course. Georgians should know that the West has their back.

Denis Corboy is a visiting senior research fellow at King's College London and was European Union ambassador to Armenia and Georgia.

William Courtney is an adjunct senior fellow at the RAND Corporation and was U.S. ambassador to Kazakhstan and Georgia. Follow him on Twitter: @courtneywmh.

Kenneth Yalowitz is the Director of the Conflict Resolution Program at Georgetown University and a Global Fellow of the Woodrow Wilson Center, and was U.S. ambassador to Belarus and Georgia.

This commentary originally appeared on U.S. News & World Report on January 5, 2016. Commentary gives RAND researchers a platform to convey insights based on their professional expertise and often on their peer-reviewed research and analysis.