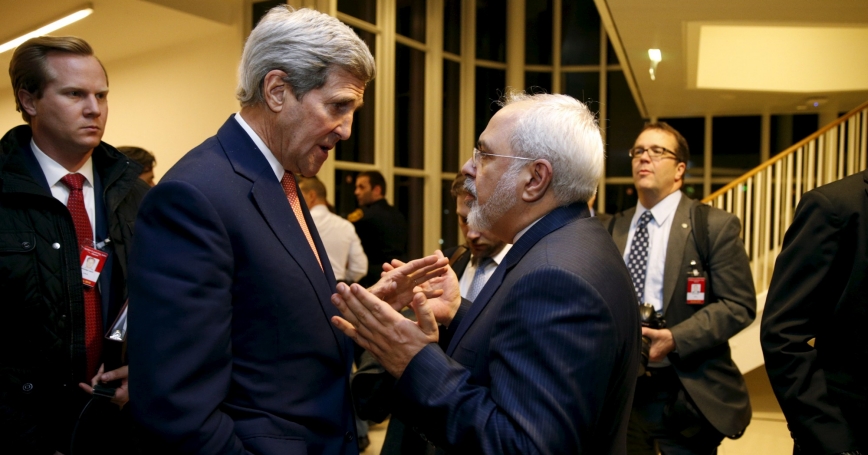 U.S. Secretary of State Kerry and Iranian Foreign Minister Zarif after the IAEA verified that Iran has met all conditions under the nuclear deal

The nuclear agreement with Iran, the Joint Comprehensive Plan of Action (JCPOA), is working. Yet some U.S. lawmakers continue to oppose the deal and have been promoting legislation to defund the deal's implementation and impose new sanctions on Tehran. If Congress continues on this path, the chances that the deal will succeed and lead to a nuclear free Iran will be diminished.

This weekend, the United States and its partners announced that Iran had met its so-called “Implementation Day” commitments that would trigger sanctions relief and the release of frozen Iranian assets. In just five months — far faster than expected — Iran took crucial steps to dismantle its nuclear infrastructure. It removed more than 13,000 centrifuges. In December, it shipped almost its entire stockpile of enriched uranium — 25,000 pounds — to Russia. And earlier this month, it removed the core of its Arak heavy water reactor and filled it with cement, which effectively eliminated Iran's plutonium path to a nuclear weapon.

Iran also proved to be sufficiently transparent regarding its past military-related nuclear activities — its so-called possible military dimensions — that the International Atomic Energy Agency (IAEA) was able to report (PDF) that Iran ended its organized nuclear program in 2003 and that it conducted limited research and computer modelling through 2009, at which point weapons-related activities stopped — a conclusion largely consistent with the U.S. intelligence community's 2007 National Intelligence Estimate. Although Iran did not provide 100 percent of the information requested of it, the IAEA director general was confident that inspectors had enough data “to provide an assessment of the whole picture” of Iran's nuclear activities.

However, even as it moves to implement the JCPOA, Iran has taken provocative steps meant to demonstrate to domestic audiences that Iran has not capitulated. In October and November, for example, Iran conducted a series of medium-range ballistic missile tests that violated UN Security Council resolutions but not the nuclear deal.

Such actions give congressional opponents of the deal ammunition to call for the agreement's abrogation. Claiming that Iran's missile tests represented advances in its ability to deliver a nuclear weapon, 35 GOP senators urged the president in December to suspend sanctions relief, which would have scuttled the JCPOA. The president responded to the provocation by imposing sanctions on eleven firms and individuals tied to Iran's missile program without levying collective penalties that would reverse the sanctions relief promised under the nuclear agreement.

Indeed, since the JCPOA was signed in August, Congress has taken many steps to undermine the deal, both directly and indirectly. In a particularly direct shot at the JCPOA, on Dec. 3, House members introduced a resolution calling for a cutoff of U.S. funds to the IAEA, which comprise 42 percent for the agency's total budget. Five days later, the House passed a bill that would require citizens of 38 visa waiver countries who traveled to Iran after March 2011 to get a visa to enter the United States. This measure will have the effect of discouraging European and Asian business people who wish to travel to the United States from doing business in Iran — thereby hindering Iran's ability to benefit economically from the JCPOA.

Last week, the House passed legislation (PDF) that would prevent sanctions relief unless the administration certifies that the individual or entity affected “is not a terror financier, human rights abuser or involved in the proliferation of weapons of mass destruction.” This language is designed to keep sanctions on a range of state-linked entities despite the fact that the JCPOA was not designed to address terrorism or human rights or proliferation. Those issues are covered by existing sanctions laws that are unaffected by the deal.

Given Iran's past history of hindering nuclear inspectors and engaging in covert nuclear research, the JCPOA wisely made sanctions relief contingent on Iran's first having verifiably undertaken steps to dismantle its nuclear program. It has completed these tasks, and it is now the United States' turn to implement its obligations under the deal, which include sanctions relief.

If Congress continues trying to block the suspension of sanctions or impose new ones for unrelated behavior, both Iran and the United States' allies will likely claim that Washington is trying to walk away from the deal. In such a case, Iran may well resume its nuclear program, and some countries may be eager to do business with Tehran in spite of U.S. restrictions. Such an outcome would leave Iran able to expand its nuclear program — a losing proposition for the United States and its allies.

Congress could remain actively involved in overseeing the deal's implementation by holding hearings, requiring frequent reports from the executive branch, and traveling widely to gain information and perspectives from allies and partners. And if Iran fails to live up to its commitments, Congress could respond to its intransigence with penalties. But as long as Iran is following through on its commitment to dismantle its nuclear program, it's not clear that legislative attempts to undo the deal will have the desired effects sought by congressional sponsors.

Larry Hanauer is a senior international policy analyst at the nonprofit, nonpartisan RAND Corporation. He is the author of “Congress's Role in Implementing a Nuclear Agreement,” one of several RAND reports examining the implications of a nuclear deal with Iran.

This commentary originally appeared on The Hill on January 19, 2016. Commentary gives RAND researchers a platform to convey insights based on their professional expertise and often on their peer-reviewed research and analysis.