Pakistan Holds the Key to Peace in Afghanistan 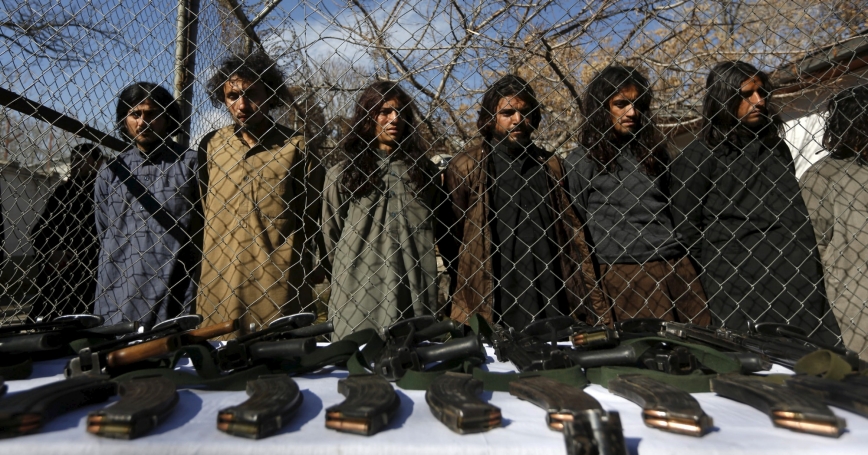 Pakistani Taliban fighters, who were arrested by Afghan border police, stand during a presentation of seized weapons and equipment in Kabul, Afghanistan, January 5, 2016

by Zalmay Khalilzad and James Dobbins

During his most recent visit to Kabul, Pakistani army chief Gen. Raheel Sharif promised Afghan leaders that he would press Pakistan-based Taliban leaders to resume peace talks and take action against those who resort to terrorism and violence.

Against the backdrop of Afghan President Ashraf Ghani's friendly visit to Islamabad earlier this month, Sharif's announcement has raised hopes that the Afghan reconciliation process and related steps can help end the country's bloodshed.

The Afghan government announced that in early January, Pakistani, Afghan, U.S. and Chinese officials will meet in Islamabad to decide on a road map for reconciliation and reduction in fighting and violence. This is a positive development.

However, Pakistan's record on Afghanistan calls for caution and sustained pressure. Whether or not there is concrete progress by the start of the next fighting season in late March will be an indicator of Pakistani intentions.

For the past several years, Pakistani officials have deflected American and Afghan requests to shut down the sanctuaries that the Afghan Taliban and Haqqani network enjoy in their country and cut off support to the insurgency from Pakistan's Inter-Service Intelligence Agency by offering help in promoting peace talks.

Pakistan's interest in a negotiated settlement to the Afghan war seems real enough, but the Pakistani military has never been willing to take the very steps most likely to advance the process, which are to close down Afghan Taliban and Haqqani network operations in Pakistan and imprison any of their leaders not actively negotiating peace with the government in Kabul.

Why does the Pakistani military want to maintain cooperative relations with the Afghan Taliban and the Haqqani network? This policy likely stems from some combination of opportunism and fear. It sees the Taliban/Haqqani as surrogate forces that could protect and advance Pakistani interests in Afghanistan, while combating Indian influence.

But Pakistani authorities also fear that if they put too much pressure on the Afghan Taliban, it might join forces with the Pakistani Taliban in the latter's effort to overthrow the Pakistani government and introduce a radical Islamist regime.

Since 2010, the Obama government has pursued a negotiated settlement to the Afghan conflict and sought Pakistan's help in this regard. Ghani, since taking office in late 2014, has expended a good deal of his own political capital in relations with Pakistan, and paid a steep price as a result of the sparse return on investment.

Ghani chose Islamabad as the first foreign capital to visit upon his election. Seeking to turn a new page in relations, he followed up with a number of unilateral steps to demonstrate his commitment to a new relationship. Notably, Afghan security forces arrested Pakistani Taliban leaders and turned them over to Islamabad.

After years of flatly denying that it harbors insurgents, Pakistan admitted to maintaining contacts with the Afghan Taliban and Haqqani network, and offered to act as a conduit between the Taliban and the United States and Afghanistan.

Pakistan also convened one symbolic meeting between the Afghan government and the Taliban—which occurred in the presence of U.S. and Chinese observers—but failed to persuade the Taliban to reduce its military operation against coalition and Afghan forces.

In fact, military pressure on the Afghan government and civilians escalated and no follow-on meetings have taken place since.

The Taliban have advanced in the south, east and northern areas of Afghanistan. Afghan forces have fought bravely but appear overextended. ISIS and Al-Qaeda also have made their presence felt in the country. Ghani is now politically weakened at home because his gambit with Pakistan has not paid off.

Once the death two years earlier of the Taliban's founding leader Mullah Omar was revealed, Pakistan engineered the accession of Mullah Akhtar Mansour to the leadership position. The head of the Haqqani network, a longstanding surrogate of Pakistan, emerged as Mansour's deputy.

This may have enhanced Pakistan's influence over the dominant faction of the Taliban, but also exacerbated fault lines within the extremist movement when a number of Taliban rejected Mansour's leadership. Pakistan may now be in a stronger position to influence Mansour's followers—the largest Taliban faction—but probably cannot deliver all of the Taliban to any peace process.

Division within the Taliban high command makes genuine peace negotiations difficult, and the Taliban's recent advances on the battlefield probably diminish its interest in any real accommodation with the government in Kabul.

This suggests that Washington and Kabul should focus less on fostering talks and more on persuading Pakistan to take action against those engaged in terrorism and violence. While opening peace talks could be a positive step, it will only yield fruit if Pakistani authorities also begin to close down Afghan Taliban military operations.

Without Pakistani initiative, talks with the Taliban are unlikely to succeed. Perhaps with Pakistani consent and support the Taliban will continue to push their advantage on the ground. Alternatively, given ground realities, the Taliban might demand that the United States and Afghanistan cede provinces in the east and the south to them.

Territorial demands in particular would prove unacceptable to Washington and Kabul, as they would create a new terrorist sanctuary and serve as a launching pad for insurgents to divide Afghanistan and seize Kabul.

Continued U.S. pressure is needed to induce Pakistani cooperation in reducing the violence.

Continued U.S. pressure is needed to induce Pakistani cooperation in reducing the violence. Congress withheld nearly a third of the military assistance allocated to Pakistan for 2015 due to Islamabad's failure to take meaningful action against the Haqqani network. An even larger proportion of the assistance should be conditioned in the coming year on Islamabad closing down the Haqqani network and Taliban military in the country.

Another step that would steer Pakistan in a more cooperative direction is for the United States to move urgently in addressing the gaps in Afghan capabilities identified during the last fighting season in areas such as intelligence, logistics and air support. Washington should not rule out deploying some additional forces and easing rules of engagement for targeting the Taliban and ISIS targets.

At this juncture, sustained and intensified pressure on Pakistan offers the only viable path to advancing the reconciliation process in a way that does not turn Afghanistan into a launching pad for terrorism and extremism.

Zalmay Khalilzad, a former American ambassador to Afghanistan and U.S. permanent representative to the United Nations, is a counselor at the Center for Strategic and International Studies. James Dobbins, a veteran diplomat who most recently served as the State Department's special representative for Afghanistan and Pakistan, is a senior fellow at the nonprofit, nonpartisan RAND Corporation.