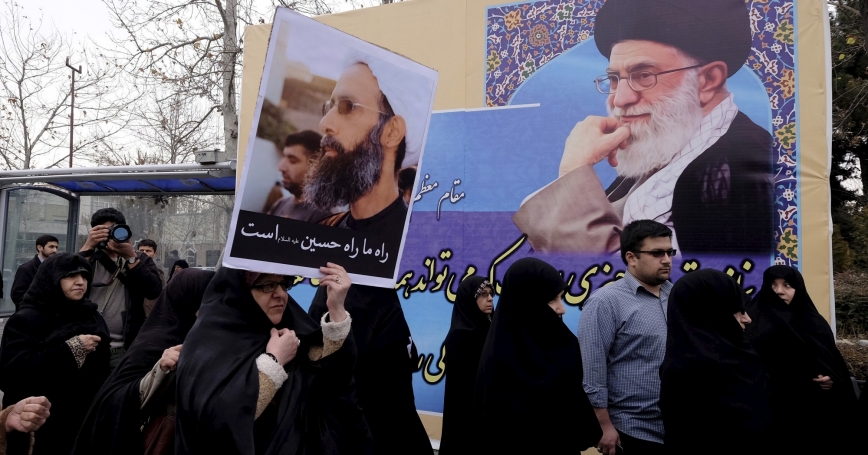 A protester holds a picture of Shi'ite cleric Sheikh Nimr al-Nimr, who was executed in Saudi Arabia, during a rally in Tehran January 8, 2016

Relations between Saudi Arabia and Iran are arguably at a historic low. Saudi Arabia has cut off diplomatic relations with Iran in response to mob violence against Saudi diplomatic facilities in Tehran and Mashhad. Those attacks were a reaction to Riyadh's execution of a prominent Shi'a Saudi activist who had criticized the Saudi regime. Saudi Arabia has been a close American partner for decades, while Iran's revolutionary government has been Washington's foremost opponent in the Middle East since 1979. But the resolution of the Iranian nuclear crisis through diplomacy has removed an obstacle to U.S.-Iran engagement on a number of regional conflicts, especially in Syria. The Saudi-Iranian rivalry threatens to obstruct American efforts to resolve the Syrian conflict and fight the Islamic State and other extremist groups.

It may be easy to conclude that the Saudi-Iranian rivalry is the result of long held religious and ideological animosities. Saudi Arabia, home of Mecca and Medina, Islam's two holiest sites, seeks leadership over the Muslim Middle East, while Shi'a majority Iran views Saudi Arabia's Sunni Wahhabi ideology as a challenge to its stability and regional ambitions. But the current fight between Riyadh and Tehran is also motivated by geopolitical and economic competition. Saudi Arabia views Iran as an ascendant power in much of the region. Iran sees Saudi Arabia as promoting unrest in Iran and actively opposing its regional allies.

But perhaps more than anything, the nuclear accord between Iran and the United States has induced a sense of abandonment in Riyadh. The Saudis may fear that Washington might one day replace its alliance with Saudi Arabia with a new partnership with Iran; or perhaps more realistically, that Washington might come to depend less on Riyadh given improving ties with Iran. Iran's capture and quick release of U.S. sailors in the Persian Gulf may reinforce Saudi fears. Washington and Tehran were able to resolve the incident peacefully through communication at the highest levels of their respective governments.

Saudi Arabia has a right to be nervous about its future, but the tendency to view or portray Iran as the cause of all of its problems is simply wrong. The Arab Uprisings across the Middle East are one source of Saudi anxiety. The declining price of oil and potential internal unrest in Saudi Arabia are another. Iran does pose significant challenges to the Saudi monarchy, but Saudi stability will ultimately rest on Riyadh's ability to create a sustainable political and economic system responsive to the demands of its increasingly politically aware citizenry. Blaming everything on Iran will not solve Saudi Arabia's problems; and more assertive actions against Iran are likely to strain Riyadh's ties to Washington.

The nuclear agreement shows that Iran is open to engagement, even with its foes, and could present a good opportunity to improve Saudi-Iranian relations. Hopefully both countries will come to this view for the sake of regional stability.

This commentary originally appeared on The Cipher Brief on January 21, 2016. Commentary gives RAND researchers a platform to convey insights based on their professional expertise and often on their peer-reviewed research and analysis.