State of the Union 2016: Insights on Obama's Last Address 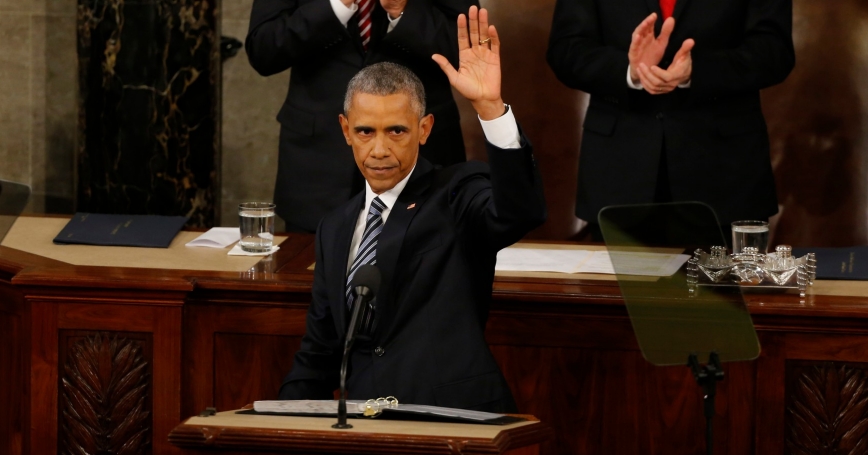 U.S. President Barack Obama waves at the conclusion of his State of the Union address to a joint session of Congress in Washington, January 12, 2016

In his final State of the Union address last night, President Barack Obama painted a hopeful picture of America, noting that it remains the most powerful nation on Earth — “It's not even close,” he repeated — with the world's “strongest, most durable economy.” At the same time, he acknowledged both the effort it will take to tackle the world's biggest challenges, as well as the fears many Americans harbor about their economic security, terrorist attacks, and more.

If policymakers are to develop effective solutions to the critical challenges facing the United States, they'll need to draw on high-quality research, analysis, and expertise that are both objective and nonpartisan. Below are some excerpts from the president's remarks, followed by context provided by RAND work.

The Threat of ISIS

“As we focus on destroying ISIL, over-the-top claims that this is World War III just play into their hands… They pose an enormous danger to civilians, they have to be stopped, but they do not threaten our national existence.”

The first installment of RAND's Strategic Rethink series, which explores key strategic questions for the years to come, expands on the president's sentiment above, arguing that the United States faces no existential threat. Rather, it faces an unusually wide and diverse array of challenges; the terrorist group known as ISIS or ISIL is one. Moreover, regional upheavals like the one unfolding in the Middle East today are “by no means a new phenomenon.”

The president continued by discussing the U.S.-led coalition's many ways of combatting ISIS, including cutting off the group's financing. In recent congressional testimony, RAND's Keith Crane discussed the role of oil, ISIS's single most important revenue source. Targeting ISIS's oil loading facilities and heavy trucks can weaken the group, he says, but this alone will not lead to its demise. RAND experts also noted last month that, despite a year of airstrikes on ISIS's oil infrastructure, the group's finances remain strong. They recommended redoubling efforts to target ISIS's war chest as well as its ability to attract recruits from around the globe.

Capped by the recent seizure of Ramadi by Iraqi forces, ISIS's regional foothold began to slip in 2015. But this loss of territory could have a downside, says RAND's Seth Jones. As it loses ground, ISIS could resort to more terrorist attacks in the West. In the wake of ISIS's assault on Paris in November, RAND's Daniel Gerstein discussed the importance of preparing for an ISIS attack on American soil. However, he argued, perhaps the most important thing Americans can do is continue to live their lives: “Increased vigilance is prudent, but changing American society would mean that the forces of radicalization have prevailed, an unthinkable outcome.”

The Landmark Paris Climate Change Accord

“Why would we want to pass up the chance for American businesses to produce and sell the energy of the future?”

One of our experts described last month's Paris climate change accord as a “new approach to perhaps the most difficult problem of collective action the world has ever known.” Another said the deal "puts in place a reasonable and plausible international framework for moving forward on climate change." However, that doesn't mean the deal is a lock to succeed. According to RAND experts, the ultimate success will hinge on a “massive shift” of private investment towards low-carbon technology and government policies to encourage such shifts.

According to RAND's Steven Popper, it's also significant that the framework for the negotiations was in sync with what science says about how to make effective public policy decisions: “This alone makes [the Paris negotiations] historic and may provide a model for both local and global action on more than climate alone.”

“[Regarding] Syria … we're partnering with local forces and leading international efforts to help that broken society pursue a lasting peace.”

What's the best chance for peace in Syria? According to a recent RAND paper, external parties should persuade stakeholders to accept a ceasefire, with further negotiations on a political settlement to follow. The alternative is the indefinite continuation or even escalation of a devastating war.

RAND experts have also studied the past for lessons about how the United States and the rest of the international community can help lessen the risk of refugee radicalization.

Is the wave of refugees from Syria a threat to U.S. homeland security? In assessing how jihadist conspirators enter America during testimony before a congressional subcommittee last month, RAND's Brian Michael Jenkins noted that the problem appears to be more one of inspiration (i.e., homegrown terrorists) and less one of infiltration. In the past 25 years, he says, only two refugees were convicted of involvement in terrorist plots in the United States.

Finally, another duo of RAND experts has argued that welcoming more Syrian refugees to America, in addition to being humane, is the best way to help defeat ISIS and rehabilitate America's image in the chaotic Middle East.

“I hope we can work together this year on some bipartisan priorities like … helping people who are battling prescription drug abuse and heroin abuse.”

Last fall, President Obama announced steps to stem America's epidemic of opioid abuse. His plan aims in part to double the number of physicians certified to prescribe buprenorphine for treatment. Buprenorphine can be a “life changer,” says Dr. Bradley Stein, who has led a RAND research effort on the drug. And it has already increased potential treatment access in recent years.

“I see [goodness and decency] in the American who's served his time, made bad mistakes … but now is dreaming of starting over, and I see it in the business owner who gives him that second chance.”

Aiming to curb an incarceration rate that has more than quadrupled in the past 40 years, the White House announced a series of corrections reforms in 2015. Among these is a program to offer Pell grants to those taking college courses behind bars. According to RAND research, prison education programs reduce recidivism and save taxpayer dollars. Inmates who participate in any kind of educational program are up to 43 percent less likely to return to prison. And every dollar invested in correctional education saves nearly five dollars in reincarceration costs over three years.

The Importance of Early Childhood Education

“In the coming years, we should build on [our] progress, by providing Pre-K for all.”

High-quality early childhood interventions can generate returns to society ranging from approximately $2 to $17 for every dollar spent. Early childhood programs can yield benefits in academic achievement, delinquency and crime, and labor market success. They may also help close the “achievement gap.” RAND experts have studied a range of early childhood education issues, including parental involvement, teacher training, teaching strategies, and program evaluation. Most recently, researchers found strong evidence that the “preschool to third grade” approach is a promising education reform that should be considered by those seeking to improve early education performance.