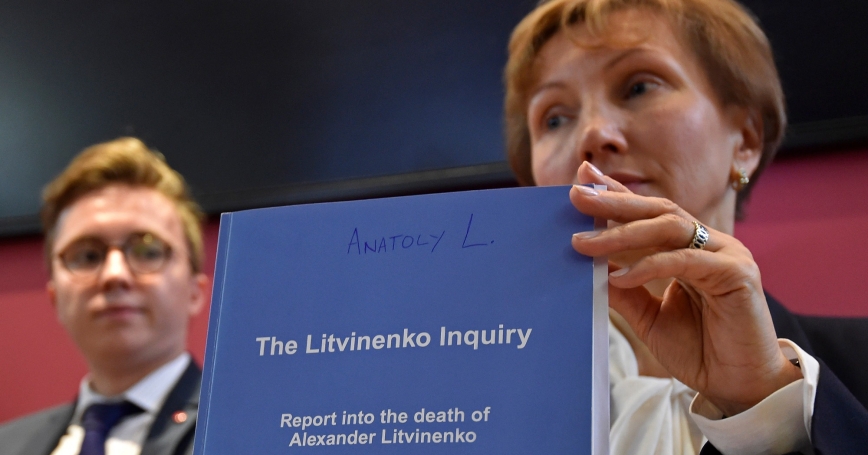 Marina Litvinenko, widow of murdered ex-KGB agent Alexander Litvinenko, holds a copy of The Litvinenko Inquiry Report with her son in London, January 21, 2016

British parliamentary reports don't often make global headlines, but that is exactly what happened with a report released Thursday that looked into the 2006 death of a former Russian secret agent in London.

The Owen Report — named for Sir Robert Owen, the senior British judge conducting the investigation — provides details on how rare radioactive polonium-210 came to be found in Alexander Litvinenko's body, and the series of events that led to the death of the former agent, who specialized in tackling organized crime.

The report was much anticipated in the United Kingdom, where a lawyer for the Litvinenko family described his murder as “an act of nuclear terrorism on the streets of a major city that put the lives of numerous members of the public at risk.” And, as expected, the report highlights the links between Litvinenko and the Russian government, even pointing the finger at President Vladimir Putin himself as likely having approved the alleged murder.

But as important as the findings are in terms of trying to establish how someone may have died on British soil as the result of radioactive poisoning, the report does not explicitly address a broader, troubling development — the increase in the use of Chemical, Biological, Radiological and Nuclear (CBRN) material as tools of war, terrorist tactics and even assassinations.

The use of CBRN weapons is certainly nothing new in the history of warfare. Large-scale use of gas killed an estimated 1.3 million in World War I, while the nuclear attacks in World War II were used with devastating effect against Japan. And the use of poisons in assassination attempts dates back to the Renaissance and ancient Rome.

The problem is that we appear to be seeing a lowering of these thresholds.

By one accounting, there were 13 CBRN attacks during the 15-year period from 2000-2015, and that does not count the Litvinenko case and other recent suspected assassination attempts. Meanwhile, the total for the other materials over the last 15 years is more than double the six that occurred during the 15-year period from 1985 to 2000, with eight of the 13 more recent attacks occurring in the last five years.

As a result, the modern day use of chemical material — from battlefield weapons to toxic industrial chemicals — by states and terrorists has killed or injured thousands since the dawn of the new millennium. Indeed, the use of chemical weapons by the Bashar al-Assad government in Syria alone is reported to have killed or injured thousands since 2013. And in 2002, the Russian government used an unidentified gas to subdue Chechen terrorists during the siege of a Moscow theater, in which more than 600 were injured or killed.

But it is not just states that have been employing chemical weapons and experimenting with biological pathogens — terrorists have been, too. U.S. officials believe the Islamic State of Iraq and Syria already is using crude chemical weapons against government forces and civilian populations in Iraq and Syria. And the group is believed to be seeking supporters with skills in microbiology, chemistry or related disciplines to develop more advanced weapons. In 2002, U.S. forces discovered evidence of an al Qaeda chemical and biological lab during initial operations in Afghanistan.

One need only look at what happened in the United States during the 2001 anthrax attacks to see the impact that a mere several grams of biological material can have, even when delivered through rudimentary means, like letters sent through the mail. Just as alarming is that those looking to cause harm can, with relative ease, find recipes on the Internet for developing biological weapons, including for growing Clostridium botulinum, the pathogen that causes the potentially fatal illness botulism.

The poisoning of Litvinenko is not the only example of this. In 2004, Viktor Yushchenko was campaigning for the Ukrainian presidency when he became seriously ill due to what was later found to be dioxin in his system. And U.S. officials may not be immune to the threat. In her memoir, Laura Bush detailed suspicions that several members of their delegation, including President George W. Bush, were poisoned during the G8 Summit in Germany in 2007. While the Secret Service investigated the incident, no definitive conclusion could be reached.

Clearly, norms against the use of CBRN are vital to the security of the United States and the safety of its population. Treaties such as the Nuclear Nonproliferation Treaty, Biological Weapons Convention and the Chemical Weapons Convention were formulated to moderate state behaviors and have been largely successful, albeit with some important exceptions. However, with the proliferation of technology and the recent up-tick in CBRN activity by non-state actors, a renewed commitment is needed.

With that in mind, continuing international collaboration on CBRN issues will be key. Establishing and enforcing national laws, policies and regulations for limiting behaviors must also be in place. Penalties for use of CBRN, whether as tools of war, terrorist tactics or for assassinations must be absolute. Under no circumstances can norms against the use of CBRN be allowed to wane.

Slipping radioactive material into a spy's tea in the middle of London may not sound like a CBRN attack, but it is, as the Owen report has confirmed. Hopefully, the report's release will help focus global attention on the growing threat posed by these potentially devastating weapons.

Daniel M. Gerstein works at the RAND Corporation. He was the former Under Secretary (Acting) and Deputy Under Secretary in the Science and Technology Directorate of the Department of Homeland Security from 2011 to 2014.

This commentary originally appeared on CNN on January 21, 2016. Commentary gives RAND researchers a platform to convey insights based on their professional expertise and often on their peer-reviewed research and analysis.