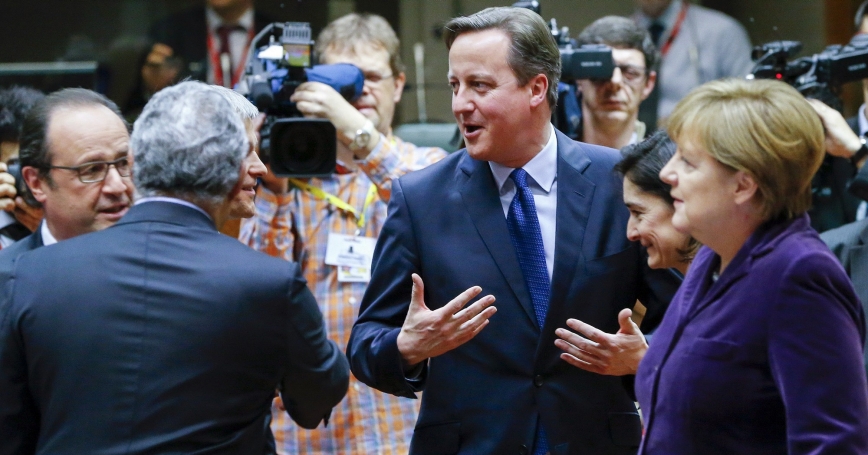 by Barbara Janta and Emma Harte

The forthcoming European Council meeting (EU Summit) on 18–19 February will present a final opportunity for UK Prime Minister David Cameron to discuss a programme of reforms within the European Union (EU), as the UK heads towards a stay-leave referendum likely to be held later this year.

At the top of the list of reforms is the UK's call for a ban on EU migrants receiving in-work benefits in the UK until they have been in the country for four years. Some within the UK government argue that this would act as a disincentive for EU citizens considering coming to the UK, but others argue that it unfairly discriminates.

It looks likely that Cameron will have to be flexible on his demands or drop them altogether, amid warnings from Brussels that resistance to the plan is being voiced from all the other EU member states. Nevertheless the UK Prime Minister is expected to make a final push at the EU summit with a number of Europe's leaders.

Cameron's position on EU migrants coming to the UK raises a number of questions. Can the access to welfare benefits be negotiated within the EU? What are the EU migrants' rights and how are they exercised? Do EU migrants move to the UK and other member states to claim social benefits? If so, then is it the main motive behind their move?

What are EU migrants' rights?

The freedom of movement is one of four fundamental EU freedoms and a core element of the EU citizenship concept. It gives rights to EU nationals to move and reside freely within the territory of the EU and European Economic Area member states. However, as defined in the EU Directive 2004/38/EC, Freedom of Movement cuts opportunities for welfare tourism by stating that member states are not obliged to grant social assistance to economically non-active citizens during their first three months of residence in the host country. Furthermore, a recent ruling of the Court of Justice of the European Union states that EU member states can block jobless immigrants from receiving specific welfare benefits. The ruling stressed that freedom of movement is not an unrestricted right to use the welfare systems and claim benefits in host countries.

The ruling could make it more difficult for the UK to negotiate tougher rules to exclude EU migrants from parts of its benefit system. The UK has already tightened the rules on benefit access so EU migrants have to wait three months after their arrival before they can claim child benefit and child tax credits. Of more significance could be the ethical issue of blocking EU migrant access to the UK's safety nets, even when they do pay into the economy through income taxes.

RAND Europe's recent study on the socioeconomic inclusion of migrant EU workers in the UK concluded that access to social benefits is not the key factor for migration decisions.

As part of our study, we surveyed EU migrants in Leeds with the majority (84.1 per cent) of respondents reporting that the availability and level of social services had no influence on their decisions to live in the UK. Only a very small proportion (5.7 per cent) of respondents agreed that social benefits had a very strong impact on their migration decision. An additional 10.2 per cent reported that social benefits were a factor, but not a major one.

Our study also found a relatively low uptake of social benefits among EU migrants. The majority (67 per cent) of respondents did not receive any benefits in the UK. Among those who received benefits, the largest share (26.1 per cent) were recipients of child benefit, which is available to all UK adults with a parental responsibility if their individual annual income is below £50,000. Only a small number of respondents received any other social benefits in the UK.

A potential explanation for the low benefit uptake, as suggested by stakeholders interviewed for our study, is that the changes in the national legislation create additional incentives for migrant EU workers to find jobs. Secondly, our study found that those EU migrants who abused the system and used social benefits were stigmatised by their own compatriots, which discouraged such behaviour.

These results are in line with other studies looking at the impact of EU migrants on the UK's welfare system. Dustmann & Frattini (PDF) (2014) noted the strong positive contribution to the UK's economy made by migrants from Central and Eastern European countries; a European Commission report showed that the majority of EU migrants move to other member states for employment purposes; and a NORFACE research report (PDF) showed that migrants from Central and Eastern European member states have, on average, a greater probability of employment than similar natives in the UK.

Can a deal on access to in-work benefits for EU migrants be reached?

Likely opposition from EU member states and a lack of evidence over EU migrants coming to the UK to access benefits could put Cameron in a difficult negotiating position in seeking to change the rules on welfare benefits. However, it could be argued that, based on evidence, EU migrants receive fewer benefits than the indigenous population, so the new reforms being pursued by Cameron will not make much of a difference. This might make it more likely for the UK Prime Minister to secure some sort of deal on the issue.

No doubt talks will continue in the run-up to the forthcoming EU Summit, but the discussions should be based on the best evidence available rather than political rhetoric.

Barbara Janta is a senior analyst at RAND Europe. She has been involved in a number of studies for the European Commission and other European organisations on employment, migration, childcare and family policies. Janta is currently completing a doctoral study at the University of Warwick Institute for Employment Research focusing on the integration of EU migrants in the UK.

Emma Harte is an associate analyst at RAND Europe. She has been involved in a number of studies focused on higher education, migration and innovation since joining RAND Europe. Harte holds a M.Sc. in comparative European politics with a focus on EU policy-making and pre-election pledges.

This commentary originally appeared on E!Sharp on January 25, 2016. Commentary gives RAND researchers a platform to convey insights based on their professional expertise and often on their peer-reviewed research and analysis.