China's Naval Modernization: Where Is It Headed? 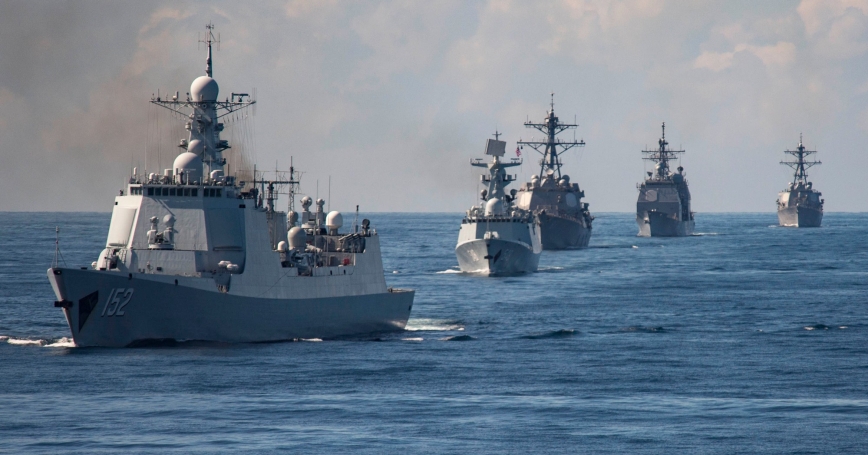 The Chinese Luyang II-class guided missile destroyer Jinan and other ships in formation during a passing exercise, November 7, 2015

The past two years have seen impressive advances in the People's Liberation Army (PLA) Navy's capabilities. In 2015, China revealed that it had begun building its second aircraft carrier and that it had begun its first submarine nuclear deterrent patrols. Breaking past convention against military bases in other countries, China last year announced that arrangements had been made for its first military support base abroad, in Djibouti.

The PLA Navy is expanding its capabilities and operations to reduce vulnerabilities in China's near seas, but also to aggressively support its expanding global ambitions and challenge U.S. leadership in Asia. As trade has powered much of the phenomenal growth that propelled China's economy to become the second largest in the world, security for maritime transit lanes has increased in importance. The number of Chinese citizens and valuable assets overseas has also expanded, with state-owned enterprises alone reported to employ 300,000 Chinese citizens abroad. Meanwhile, tensions have grown in the maritime domain over China's efforts to control the South China Sea and Senkaku Islands, which it claims as the Diaoyu. China also continues to bolster its navy's ability to support contingencies related to Taiwan and other scenarios.

Responding to these tensions and vulnerabilities, China's leaders directed the military to take on a broad array of diverse war and non-war missions and tasks. All of the services have translated the directives to focus modernization efforts and operations accordingly. The military strategy white paper published in 2015 explained that the PLA Navy will “shift its focus” from near-seas defense to a “combination of near seas defense and 'distant sea protection.'” It also explained that the military will build a “combined, multi-function, and efficient maritime combat structure.”

This suggests that the PLA Navy intends to improve its defense in “near seas” within the so-called first island chain, which extends from the Kuril Islands in the north, through Japan and Taiwan, and to the northern Philippines and Borneo in the south; while also protecting interests in the “distant seas” of the so-called second island chain—which roughly corresponds to the area between the first island chain and a posited line running from Japan through Guam to Indonesia—and beyond. It will also seek to improve coordination with the Chinese Coast Guard (CCG)....

Timothy R. Heath is a senior defense international research analyst with the nonprofit, nonpartisan RAND Corporation. He is author of the book, China's New Governing Party Paradigm: Political Renewal and the Pursuit of National Rejuvenation (Ashgate, 2014).

This commentary originally appeared on World Politics Review on February 10, 2016. Commentary gives RAND researchers a platform to convey insights based on their professional expertise and often on their peer-reviewed research and analysis.