Crude Economics, Crude Politics: Who Wins and Who Loses with Cheap Oil? 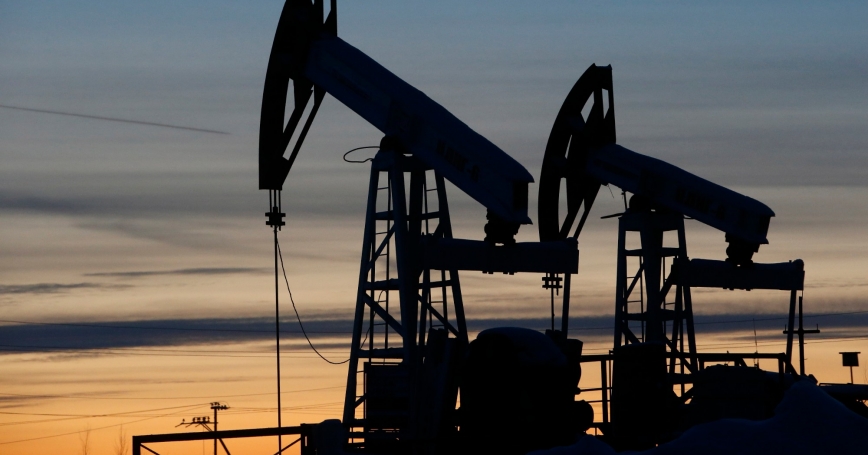 Between the middle of 2014 and early 2016, oil prices tumbled from $110 to between $30 and $35 per barrel, a drop of 70 percent. The change represents an enormous shift of income from oil-exporting countries to oil-importing countries: $1.6 trillion annually, slightly more than 2 percent of the world's $78 trillion gross domestic product. This should enhance America's national security because the principal beneficiaries of the shift—the oil importers—are allies and friends of the United States, while most of the oil exporters are U.S. adversaries and global troublemakers.

The beneficiaries include most of NATO, the European Union, Japan, Korea, Australia, Israel, Ukraine, and India. Low oil prices will ease resource constraints confronting these allies and friends, enabling them to contribute more to combating the security threats emanating principally from Iran, Russia, and the Islamic State in Iraq and Syria (ISIS)—who are some of the losers in the shift. Low oil prices will, conversely, squeeze resources available to these adversaries, thereby weakening their threats and benefiting U.S. security.

Categorizing the winners and losers is seemingly straightforward: Russia, for example, as a major oil exporter clearly falls in the loser category. Applying the categories to other countries needs clarification, however, as well as recognition of a few notable exceptions.

ISIS is a big loser from the income shift because its payroll (as distinct from its weapons' costs) for 30,000-40,000 commanders, fighters, and dependents relies heavily on cash derived from black-market sales of oil mined from wells ISIS holds in northern Iraq and eastern Syria. This is supplemented by subventions from wealthy Saudi individuals who view ISIS as a Sunni-led counter to Shiite rebels supported by Iran. Lower oil prices in the open markets mean less cash for ISIS in the black markets it's obliged to trade in because of the property thefts in which it is involved. ISIS may therefore need to offer additional discounts to make its sales, further squeezing its ready cash. Subventions to ISIS from Saudi Arabia are also likely to shrink as a consequence of depressed oil prices.

Iran is also potentially a big loser, although special circumstances may alter this forecast. Low oil prices might trigger budgetary struggles among the Revolutionary Guard, the Quds Forces, the regular military establishment, the nuclear program, and external claimants like Hezbollah. The internal budget battles may enhance U.S. security by weakening Iranian-sourced threats. On the other hand, the tightened resource constraints that would otherwise result from depressed oil prices may be largely offset—at least in the near-term—by the removal of sanctions and release of over $100 billion in previously blocked Iranian assets, in accord with the six-nation agreement reached with Iran last year on its nuclear program.

Canada is another exception. A member of NATO and a close U.S. ally, it is adversely affected by depressed oil prices because oil exports are the country's largest revenue source. These exports—$129 billion in 2014—have been sharply declining since then, so Canada's contributions to collective defense with the United States and in NATO may fall, thereby adversely affecting U.S. security.

Saudi Arabia is another special case. Its losses from fallen oil prices have been huge. It is the world's largest oil exporter: 7.4 million barrels a day (mbd). (Russia is the second-largest.) Saudi Arabia is a U.S. ally and coalition member (despite some cooling of this relationship in recent years), so its losses may adversely affect U.S. security. Nevertheless, Saudi incentives to maintain and even increase its exports remain strong. The double threat posed directly to Saudi Arabia by Shiite Iran and Sunni-led ISIS reinforces these incentives.

China is a fourth important exception to the win/lose categories. Its oil imports in 2014 were 13 mbd, the world's largest, so it benefits enormously from plummeted oil prices. (Japan, incidentally, is the second-largest importer.)

Although it is a U.S. adversary, China also has major interests that converge with those of the United States. The world's two largest economies both want stable and predictable global trade and financial markets. These convergent interests are highlighted by the recent roiling of markets in both economies triggered by China's growth slowdown, its large capital outflows, and the depreciated RMB—all abetted by some misguided policies China has pursued in trying to allay the instability. The United States and China also have common political interests in a pragmatically harmonious relationship between Taiwan's new president, Tsai Ing-wen, and the mainland, as well as the shared interest in the trilateral relationship between China, Taiwan, and the United States. It's reasonable to infer that, while China assuredly benefits from low oil prices, these benefits do not translate into commensurably reduced national security for the United States.

But how do depressed oil prices, and the attendant income shift from oil exporters to importers, affect the U.S. economy? They entail both benefits and burdens. The United States is now an importer of heavy oil—about 9 mbd—and an exporter of lighter oil from shale fracking—about 4 mbd—so it's a net beneficiary of lower oil prices. Oil is an input for production of final goods and services, such as electricity, transportation, heating, and agricultural products; low oil prices reduce production costs and lower prices of these goods, benefiting consumers and investors, and tending to increase employment in these industries.

On the other hand, these benefits may be offset by sharply depressed oil prices that erode earnings and profits of producers of shale oil, as well as of the major conventional oil producers, including Chevron, ExxonMobil, and BP, the banks and pension funds that are heavily invested in them, and the industries that supply the oil producers (for example, machinery and equipment, rail and road transport). Employment may be cut as a consequence, and stock indexes have tumbled and may decline still further.

The bottom line is that the burdens imposed on the economy by depressed oil prices may be, or may seem to be (at least to those directly affected), greater than the benefits.

Two salient questions remain: What is the outlook for oil prices? And how can we assess the balance between positive effects on national security and negative effects on the national economy?

In the near- and mid-terms, both supply and demand factors are more likely to place oil prices in or below the $30-$35/barrel range than above it. Saudi Arabia and Iran retain their separate reasons for maintaining or even increasing oil production and oil exports. Russia has equally strong reasons for sustaining its oil exports, exemplified by its ongoing ventures in Syria and Ukraine and its aspirations in the Baltic states. U.S. exports of shale oil are likely to be sustained or increased, notwithstanding presently low prices. Most of the investment costs of shale oil production (e.g., location of shale, horizontal drilling, infrastructure equipment, and transport) have already been incurred. As long as marginal costs are covered, fracked oil production will therefore be maintained or even increased.

Oil demand may weaken as a consequence of slower growth in the world economy. China's annual growth, for instance, is more likely to register in the 5 to 6 percent range than the 7 to 8 percent. This will slow the pace of oil demand, quite apart from any reductions in demand that result from the recent nonbinding Paris accords on climate change. Nevertheless, China is likely to increase domestic oil supply, perhaps by applying fracking technology to its own shale deposits, and add to its foreign oil supply as a result of the substantial aid programs it has pursued in Africa and Latin America during the past decade—programs that have emphasized increased production of oil, gas, and other fossil fuels.

How to assess the balance between the national security benefits and the possible burdens to the national economy? A qualitative answer is conceivable, but difficult and fraught with uncertainty. To attempt a quantitative answer would be complicated and likely remain arguable. It may be both necessary and sufficient to acknowledge the question, rather than stretch for an elusive answer.

This commentary originally appeared on The Weekly Standard on March 7, 2016. Commentary gives RAND researchers a platform to convey insights based on their professional expertise and often on their peer-reviewed research and analysis.