Is a Syria Truce in Putin's Best Interest? 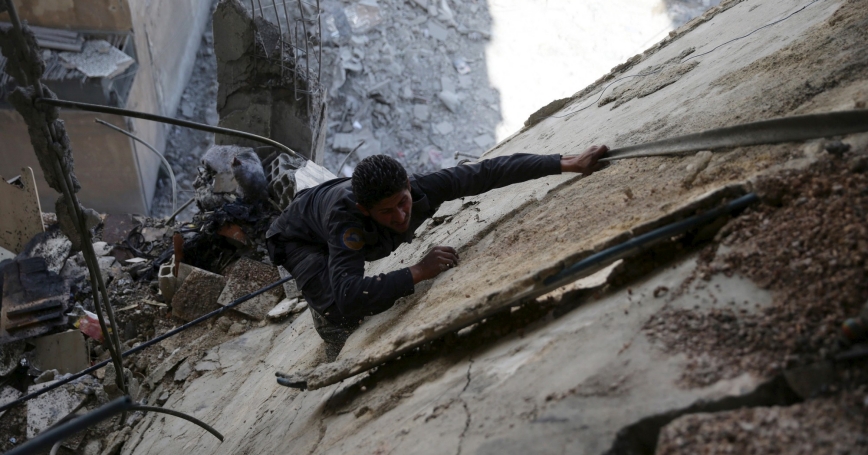 A civil defence member works at a site after airstrikes by pro-Syrian government forces in the rebel held Douma neighborhood of Damascus, Syria, February 14, 2016

In Syria, as in Ukraine not long ago, great powers have negotiated a tentative ceasefire in fighting in which Russia is a main protagonist.

With an estimated 470,000 killed and millions displaced, the conflict in Syria is far more lethal and complex than in Ukraine and prospects for peace are worse. No contestant is yet exhausted.

So is a temporary peace possible? And how can the West and its Arab partners help sustain a ceasefire?

A RAND study of all 71 insurgencies begun and ended between World War II and 2010 found that their median length was almost 10 years. The Syrian civil war is only half as long.

A complicating factor prolonging insurgencies is the presence of multiple actors with competing interests. In Syria, for example, Russia, Iran and Hezbollah support the regime of Bashar al-Assad, while America, Turkey and other key NATO allies back various Sunni rebel groups, as do Saudi Arabia and other Gulf States.

The presence of ISIS in Syria is another complicating factor. It is loathed by many, but apart from the West, most other external actors place a higher priority on supporting, or opposing, the regime of Assad. No actor by itself has the strength to bring about a stable peace in Syria.

In addressing the Syrian crisis Russia and America are engaged together, precariously. They lead the peace process, and may hope with European help to replicate their success in the Iran nuclear deal, no easy task. The peace process has many more participants from within and outside of Syria, but excludes ISIS and the Al-Qaeda-affiliated al-Nusra Front, which will have to be dealt with militarily.

The West and its Arab partners are investing too little in Syria to make a decisive difference, and their coalition of more than 60 nations is tenuous and has many free riders. The West yearns for a democratic transition, but lacks the leverage of control of territory, as it had in Afghanistan and Iraq. Turkey fears gains by Syrian Kurds, but they are one of the most effective forces fighting ISIS.

Cease-fires should be viewed for what they are—incremental steps that may temporarily reduce violence, thereby opening space for the parties to maneuver politically and appeal to their constituencies.

Yet cease-fires must also be considered with guarded skepticism. They can be a start for further confidence-building measures, but are usually far from permanent solutions. So while a temporary pause in violence may provide opportunities for contestants to rest and rearm, they can also spur parties to reassess the merits of continuing the fight, lead to the splintering of adversary groups or expose potential spoilers to a peace process.

Successful settlements tend to involve power-sharing agreements, ascension of moderate leadership, or third party guarantors of security. These dimensions are all currently missing in Syria.

A cessation of hostilities will not hold without support from Moscow, but it remains ambivalent. Russia teeters on the brink of a major victory in the seizure of Aleppo, Syria's largest city. Lasting gains in Syria would fuel Moscow's great power ambition, show results from expensive military modernization, provide Russian forces with useful combat experience and help deter adversaries. Hence, Russian military leaders might be wary about peace diplomacy they see as premature.

Kremlin leaders, however, also have to contend with political ramifications. Not only German Chancellor Angela Merkel views Russian bombing in Syria as “horrific.” Television screens around the world show how it is exacerbating the humanitarian catastrophe that is Syria today.

The conflict has led to 7.6 million internally displaced persons in Syria, and 12.2 million people in need of humanitarian aid. The suffering dismays Sunnis in the Arab world and probably in Russia, where they comprise over 90 percent of the 10 million or more Muslims, though it's not clear how much of the Syrian misery the Russian public is seeing.

The Syrian intervention further isolates Russia from the West, a large economic partner. The SU-24 shoot-down has led to a sharp Russian break with Turkey. Finally, Russia is facing growing economic strains and a possible uptick in political unrest.

The West has been less proactive toward resolving threats to peace in Syria than in Iraq and Afghanistan. President Obama has said America does not wish a “proxy war” with Russia.

Although Washington has increased supplies of TOW anti-armor missiles to rebels it backs, they have not received what they now need most, anti-air capability. This is reminiscent of Afghanistan in the 1980s before America helped turn the tide against Soviet occupiers by supplying insurgents with Stinger anti-air missiles.

To improve cease-fire prospects in Syria, the West and its Arab partners will not only have to drive the peace process to maintain pressure for political accommodation, but also do more to help the rebels they back avert a destabilizing military imbalance. This means providing more military aid, including anti-air. Without this support, a mutually painful stalemate may not be possible, thereby reducing incentives for the Syrian regime and its allies to negotiate a settlement.

Making continued military progress against ISIS will also be crucial to enabling the more moderate rebel groups. As ISIS is further weakened, the West can move to a more forward-leaning stance, shifting more resources to pressuring the Syrian regime and working to increase the appeal of pursuing a negotiated settlement. The future of Syria could be at stake.

Colin P. Clarke is an associate political scientist at the nonprofit, nonpartisan RAND Corporation. William Courtney is an adjunct senior fellow at RAND and was U.S. ambassador to Kazakhstan and Georgia.

This commentary originally appeared on Newsweek on February 18, 2016. Commentary gives RAND researchers a platform to convey insights based on their professional expertise and often on their peer-reviewed research and analysis.