New Era with Iran? Not So Fast 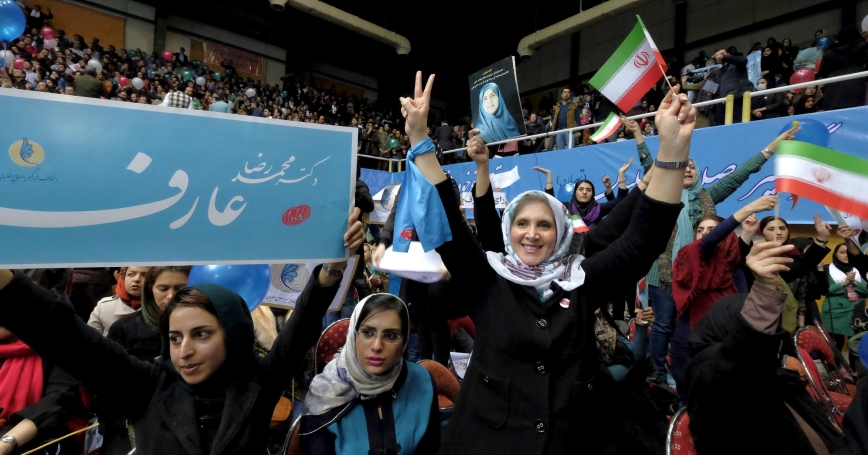 Iranian women take part in a reformist campaign for the upcoming parliamentary elections in Tehran February 20, 2016

The implementation of the Iran nuclear agreement and the release of Americans held prisoner in Iran are no doubt positive developments. Iran's implementation of the agreement leaves it without the ability to develop nuclear weapons quickly; more importantly, the nuclear program comes with closer international supervision. On the whole, ties between the United States and Iran are improving, especially considering that relations between the two had been marked by great tension in recent years, and military conflict did not seem far off at times. But to think that a new era in Iran or in U.S.-Iran relations has arrived is a stretch.

The forces of the status quo in Iran are still strong. It's true that President Hassan Rouhani appears to be enjoying a strong tailwind: Sanctions against Iran have been lifted, Iranian prisoners in the United States have been released in exchange for the release of the Americans and Iran acted quickly to release captured U.S. sailors who had wandered into their territorial waters recently. But in Iran, progress has often faced resistance and pushback by reactionary forces.

Iran was in the throes of reform in the 1990s under President Mohammad Khatami, who not only controlled the executive branch but was also able to dominate Parliament for a time. Khatami's brief “spring” allowed for a more open and expressive society, a profusion of new media and a dynamic economy. However, his era of reform was followed by the presidency of Mahmoud Ahmadinejad from 2005 to 2012, a contested presidential election in 2009, mass protests, a brutal regime crackdown and life under severe sanctions. Iran's political system has changed significantly since the Khatami era: The Revolutionary Guards have amassed political and economic power, and the 2009 Green uprising has left the regime more suspicious of reform than ever.

Rouhani has always stated his duty to conduct policy within the framework established by Supreme Leader Ayatollah Ali Khamenei, who has said that he is not opposed to negotiating with the United States on specific issues. The past two years have demonstrated the convergence between Rouhani and Khamenei as they both sought the lifting of sanctions. And both men may believe that the United States and Iran should engage on a number of other issues, including resolving the Syrian conflict and fighting the Islamic State group.

But it is unlikely that Khamenei's policy framework extends to normalizing relations with Washington, allowing more open elections, improving human rights, easing political and social repression or fundamentally changing Iran's regional policies. Human rights abuses have increased since Rouhani's election. Traditional and social media are heavily censored. Many Iranian-Americans traveling to Iran are not necessarily safer after the prisoners' release. Reports indicate that Iran's watchdog Guardian Council disqualified many reformist and centrist candidates from running in the upcoming parliamentary elections. And Tehran continues to fund and train sectarian forces throughout the region.

Iranians who have lived through the nuclear crisis are right to be wary of the future. And policymakers in Washington should view Iran the same way. The next U.S. president may explore new opportunities for diplomatic engagement with Iran. But he or she cannot ignore the realities of Iran and the Middle East. The United States has achieved an important diplomatic breakthrough with Iran, but it still faces the same regime it has since 1979. And Iranians are still waiting for a truly new era that includes personal freedoms long denied to them. The euphoria surrounding the nuclear implementation should not obscure a key fact: The Islamic Republic acted in its own self-interest by implementing the nuclear agreement. It was not an act of kindness or friendship toward America or its key regional allies and partners.

A new era for Iran would mean a more democratic and open nation at peace with its neighbors. The Iranian nuclear crisis is over for now, but real change in Iran still remains to be seen.

This commentary originally appeared on U.S. News & World Report on February 23, 2016. Commentary gives RAND researchers a platform to convey insights based on their professional expertise and often on their peer-reviewed research and analysis.