The Three Challenges of Countering ISIS in Libya 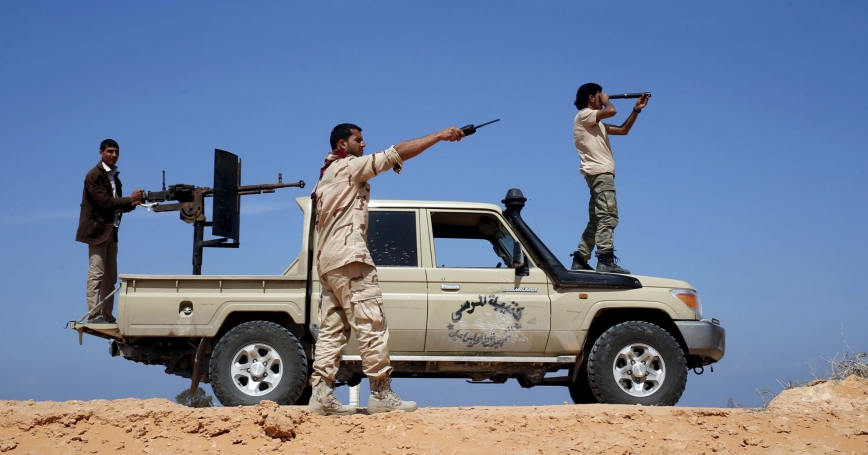 In a late January meeting with his French counterpart, the chairman of the US Joint Chiefs of Staff, US Marine General Joseph Dunford, called for “decisive action” against a growing Islamic State (ISIS) menace in Libya. His call comes on the heels of weeks of backroom discussions about how to handle ISIS's grip on a large area of Libya's Mediterranean coast and rumours that Western military intervention is pending.

Libya collapsed into civil war five years ago, in the early months of the Arab uprisings. NATO soon intervened, backing a congeries of rebel groups that overthrew Muammar Qaddafi. In the aftermath of this success, however, security in Libya faltered and crucial steps towards stabilising the fledgling state were fumbled.

Libya slid into civil war, opening the door to ISIS and other jihadist groups such as al-Qaeda in the Islamic Maghreb and Ansar al-Sharia, the group responsible for the attack on the US diplomatic compound in Benghazi in September 2012.

ISIS has been entrenched in Libya for more than a year. Unlike its other affiliates outside Iraq and Syria, ISIS in Libya numbers in the thousands and maintains clear links to the group's leadership in Syria. Most likely that leadership sees Libya as a valuable second front in its global campaign. The anarchy in Libya contributes enormously to Europe's refugee crisis and threatens the stability of the region — notably Tunisia, the epicentre of the “Arab spring” uprisings.

Just as the world was slow to see the danger of ISIS's grip on parts of Iraq and Syria, appreciation of the threat posed by ISIS in Libya is belated. It holds a bridgehead several hundred kilometres long centred on Sirte, Qaddafi's hometown. It also has elements in other parts of the country. During a visit to Tunisia in October, I heard rumours that ISIS had set up munitions factories outside Tripoli to stock up on tank-busting weaponry for a coming struggle against outside intervention.

ISIS's expansion in Libya is a threat to the security of Libyans, to the region and to Europe. It is not surprising, therefore, that those European allies most directly threatened by ISIS's deepening roots in Libya — Italy and France — have been in the lead in discussing military options for intervention.

But if the threat is serious, the current military options are hardly promising. As US and European policymakers grapple with the problem at least three big questions loom:

First, who will lead the operation and provide the bulk of the forces?

With new operations in Syria, Iraq and Eastern Europe, on top of operations elsewhere in the world, NATO is stretched thin. Italy has been the most vociferous in drawing attention to Libya's ISIS threat and has limited its participation in other operations to focus on Libya. But Italy alone cannot provide sufficient forces for an operation of the magnitude the situation in Libya now requires. France is more capable, but with crucial counterterrorism operations already stretching thousands of kilometres across the Sahel and a troop-intensive domestic counterterrorism operation, it will also be hard pressed to make a major contribution. The United Kingdom might contribute, especially with special forces, but its means and will are also limited. Meanwhile, the interest of the US public for another intervention is not strong at all.

Second, will the focus be on defeating ISIS or supporting a unity government in Tripoli?

Because the forces for intervention will be limited, hard choices will be needed. Foremost among these is whether an intervention should focus on protecting Libya's shaky unity government or just go after ISIS. Targeting the terror group would offer some quick gratification, yet do little to help restore a functioning state to Libya, the absence of which opened the door to ISIS in the first place.

Third, how will this operation relate to broader US and allied strategy against ISIS?

ISIS's objectives are clearly not limited to Iraq and Syria. Ultimately, Libya is one instance in a large global counter-ISIS campaign, however prominent within that campaign it may be. To take the fight beyond Iraq and Syria, globally, the United States and its allies will need a clear strategy and resources. Lacking this, defeating ISIS in Libya could just displace the group elsewhere in the region — or the world.

US and European cooperation to counter ISIS in Libya is essential and Libya is unlikely to ever be peaceful without outside military support. But checking ISIS's growth in Libya will not be easy. Leaders should prepare for the inevitable costs and tough choices ahead.

Christopher S. Chivvis is the author of The French War on Al Qa'ida in Africa and associate director of the International Security and Defense Policy Center at the RAND Corporation, a non-profit, non-partisan think-tank.

This commentary originally appeared on The Arab Weekly on February 5, 2016. Commentary gives RAND researchers a platform to convey insights based on their professional expertise and often on their peer-reviewed research and analysis.