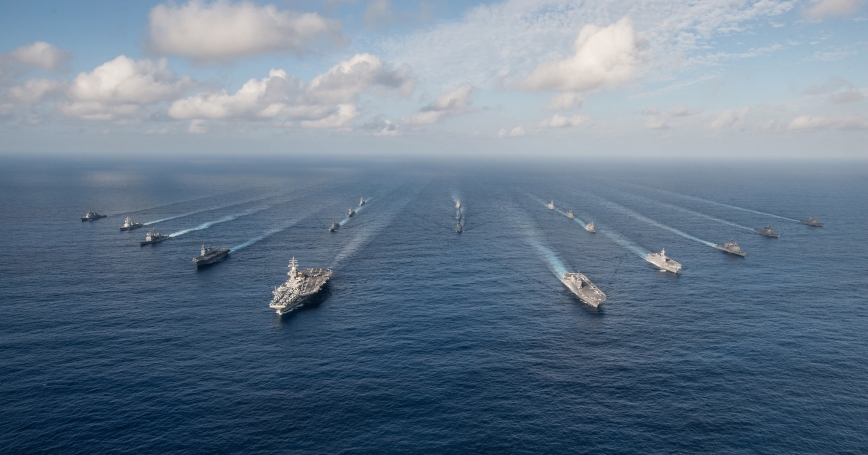 The concept of “distributed lethality”—what Navy leadership has described as “holding more adversaries at risk across a wider geography”—was a recurring theme at the recent Surface Navy Association Symposium on surface warfare strategy. But the Navy needs to make clearer what it means and how will it be implemented.

At the symposium, Vice Adm. Thomas Rowden said distributed lethality is about “increasing offensive power … defensive hardening of individual ships” and employing the ships “in a more distributed manner.”

Translating the concept of distributed lethality into action has implications for Navy operations, logistics, finances and overall strategy, and raises critical questions.

How Will Distributed Lethality Be Employed?

The strategy is only indirectly referenced in “A Design for Maintaining Maritime Superiority,” a report released last month by the Chief of Naval Operations (CNO). The report directs the Navy to partner with the Marine Corps to develop concepts and capabilities that include “high-end combat at sea” and to “explore alternative fleet designs” that include “exploring new naval platforms and formations.”

According to naval doctrine on warfare, early phases of a military campaign require “normal and routine military actions,” assuring allies of a “commitment to regional security,” and demonstration of “capabilities and resolve.” Such end states require global presence, and this is where distributed lethality provides critical value in the Navy's contribution to the U.S. Joint Forces—enhanced deterrence.

Distributed lethality is intended to complicate the potential adversary's calculus and to impose undesirable costs for challenging U.S. forces. That being said, the Navy and Marine Corps' high-value surface assets such as aircraft carriers and large-deck amphibious ships will still require protection by surface combatants, but its inventory of ships is only so large. If distributed lethality differs from the way business is conducted in the fleet today, implementation could require making significant adjustments to logistics and budget.

What About Fleet Logistics?

An increase in offensive power and defensive hardening of individual ships will undeniably require additional funding. A more lethal force— to compete with current and future adversaries—will require rapid acquisition and fielding. At a minimum, distributed lethality implies a large increase in current munitions and could require investing in many new weapons. Yet the CNO's “Design” report readily acknowledges, “We will not be able to ‘buy' our way out of the challenges that we face. The budget environment will force tough choices but must also inspire new thinking.” When will these “tough choices” be made to facilitate a distributed lethality budget? Can “new thinking” realistically compensate for a clear lack of funding, or will cuts be made elsewhere to support this concept?

Distributed lethality has tremendous merit and potential, but successful execution will require more rigorous analysis. In June 2015, the Navy's Distributed Lethality Task Force was charged with just that, and its partnership with the Naval War College and Naval Postgraduate School for wargaming and further study should help to accomplish a more robust understanding of the concept. How the CNO's “new thinking” challenge will be implemented remains to be seen.

To move forward, Navy strategy and guidance documents need to be adapted to address the realities of making distributed lethality real. At a minimum, the Navy needs more actionable guidance on how to balance competing priorities. Leaders speak with urgency about distributed lethality and its use in an era of “great power competition.” If time is of the essence, much more specificity and rigor is required.

Katie Jacobson, a Navy lieutenant commander, is an active-duty Surface Warfare Officer and a Federal Executive Fellow at the RAND Corporation.

This commentary originally appeared on Breaking Defense on February 5, 2016. Commentary gives RAND researchers a platform to convey insights based on their professional expertise and often on their peer-reviewed research and analysis.