Use Force to Forge Peace in Libya 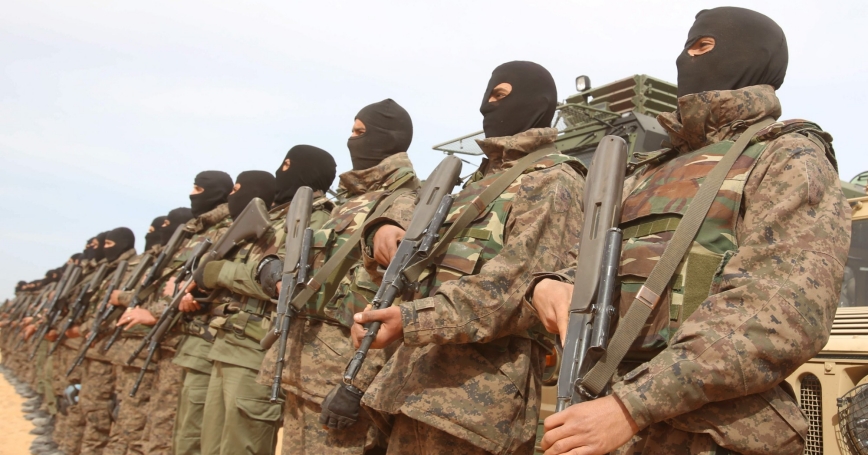 Tunisian soldiers participate in an exercise along the frontier with Libya in Sabkeht Alyun, Tunisia, February 6, 2016

Feb. 17 marks the fifth anniversary of the uprising against Moammar Qaddafi and Libya's turmoil is again in the news. In 2011, NATO intervened successfully to support Qaddafi's overthrow, but then backed off in favor of a Libyan solution to Libya's problems. The result was a civil war in 2014 that split the country in half, followed by the spread of multiple Salafi jihadist groups.

As Director of National Intelligence James Clapper told Congress this month, Libya is now home to the second-largest and fastest-growing Islamic State group affiliate outside Iraq and Syria. With thousands of fighters, its Libya bridgehead in and around the town of Sirte is a major threat to the security of Libya, as well as Egypt, Tunisia, Algeria, Mali, Niger and Chad. It could become a jumping off point for terrorist attacks in Europe.

The debate over whether or not to use military force against the Islamic State group's Libya branch is increasingly intense. Opponents of direct military action against the group at this point are right. Such action only offers a quick fix. Opponents of intervention, however, fail to realize that military action is likely needed for a more difficult task — restoring Libya's sovereignty.

Many Libya experts argue against the use of force in Libya on the grounds that another foreign military intervention in Libya will meet with massive resistance from a Libyan population they judge to be unusually suspicious of outsiders. True, some Libyans, such as the Islamic State group, will surely use a foreign intervention to their advantage. But for most Libyans, a range of other factors will determine how they react to foreign boots on their soil. Foremost among these will be whether their lives are improving.

If de facto arguments against the use of force in Libya are overblown, calls for direct military action against the Islamic State group are grounded in a misdiagnosis of Libya's underlying problem. As in Syria, the group thrives in Libya thanks to a civil war that has destroyed the Libyan state. If nothing is done to resolve the underlying problem of Libyan statelessness, direct action against the Islamic State group will only open the door to the spread of al-Qaida in the Islamic Maghreb, Ansar al Sharia or one of the other Salafi jihadist groups operating in the region.

The best option right now is thus to use force selectively to support the strengthening of the Libyan state. Specifically, the international community needs to be far more assertive about the use of economic and military power to coerce key players in Libya to get behind the U.N. brokered unity government and begin the task of rebuilding the country. This strategy is more difficult than striking the Islamic State group, but promises a more lasting effect.

So far, economic and travel sanctions have been put on the table in an effort to influence the leaders of both warring factions — the rump parliament in Tripoli and the internationally recognized government in Tobruk. These sanctions should be exercised immediately to pressure these leaders to fully support the unity government. In addition, the United States, France, Italy and the U.K. should all lean much more heavily on the Egyptian government to end its support for controversial Libyan army chief General Khalifa Hiftar, who must be forced to accept a greatly diminished role in Libya's future.

These measures alone, however, may not be sufficient to force the parties to fully support the unity government, end Libya's civil war and restart reconstruction. The United States must therefore be prepared, if possible through NATO, to take military action against groups that undermine the unity government. That action should include training and arming militias that do support the government and using force directly or indirectly against select groups that do not. Demonstrating willingness to use NATO airpower to restore a legitimate government in Tripoli (as opposed to, say, attacking Islamic State group positions in Sirte with airstrikes, special operations ground teams or both, as has been suggested) could go a long way toward pushing the feuding sides back together.

The United States and its allies must also be prepared to immediately deploy forces into Tripoli to ensure the security of a new government. The failure to provide security for the post-Qaddafi government was the main reason for its demise and Libya's subsequent spiral into civil war. The United States and its allies should be prepared to demonstrate their willingness to use force in protecting the government, while also seeking to negotiate local truces with the militias that now control the capital.

The international effort cannot stop with physical protection for the Libyan government, however. Continued pressure on the political parties will be necessary to promote agreements on the economic, security, and religious issues that divide the country. This will take time. Simultaneously, once a legitimate government is established in Tripoli, pro-government militias should receive training, arms and direct support for a counter-Islamic State group campaign. Preparations for the eventual pacification of Benghazi will also be needed.

In short, coercion has a significant role to play in restoring statehood in Libya and, eventually, helping Libya counter the Islamic State group. A similar strategy worked in Bosnia in the 1990s, when U.S. airpower and sanctions resulted in the Dayton Peace Accords. There is no guarantee that it will work today in Libya and every certainty that it will not be easy. Nevertheless, an engaged effort at coercive diplomacy is a far better option than settling for a quick fix action against the Islamic State group or allowing the status quo, on which it and other terrorist groups feed, to continue. The longer the international community waits to take action, the worse the situation will get.

Christopher S. Chivvis is the author of "Toppling Qaddafi" and associate director of the International Security and Defense Policy Center at the nonprofit, nonpartisan RAND Corporation.

This commentary originally appeared on U.S. News & World Report on February 17, 2016. Commentary gives RAND researchers a platform to convey insights based on their professional expertise and often on their peer-reviewed research and analysis.