Could ISIS and Al Qaeda, Two Giants of Jihad, Unite? 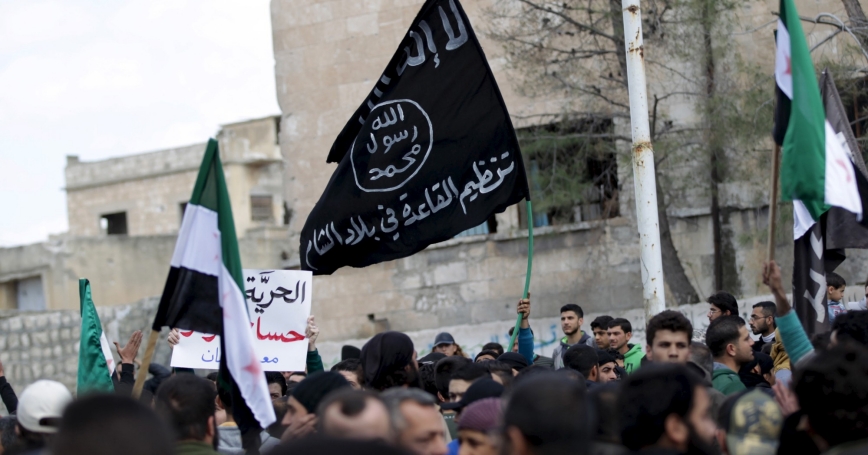 Protesters carry Al-Qaeda flags during an anti-government protest in the town of Marat Numan in Idlib province, Syria, March 11, 2016

There are both similarities and differences between Al Qaeda and the Islamic State of Iraq and the Levant (ISIL). Both are bloodthirsty terrorist organizations bent on jihad, sworn enemies of the infidel West and the United States in particular. Could they one day unite in an international jihadist merger to create an even more potent regional and global threat? It is possible.

For the moment, at least, the two groups are rivals for the mantle of jihadi supremacy and neither side's leadership has shown much interest in a union. The situation is extremely fluid, though, so it is not inconceivable that at some point in the future, beyond the current leadership perhaps, the two organizations could become one.

Al Qaeda has morphed several times since its emergence in the 1990s and its recognition as the global leader in terror with the 9/11 attacks in 2001.

ISIL or ISIS did not emerge as an international rival to Al Qaeda until 2013. Since then, ISIS challenged Al Qaeda's central leadership, engaged in hostilities with Al Qaeda's affiliate in Syria, expanded its areas of control and influence in Syria and Iraq, declared the existence of an Islamic State, and received pledges of loyalty from various jihadist fronts, including factions within Al Qaeda's affiliates in Africa and the Middle East.

Though they are rivals, there are many similarities between the two groups. Both enterprises comprise a central leadership and an array of affiliates who, while pledging their loyalty to one or the other, have their own interests, capabilities, and modus operandi. Individual fighters may also have their own agendas, and loyalties may continue to shift according to which group is perceived as dominant. In addition, both organizations appeal to self-radicalized individuals, who help the groups build their respective brands through terrorist acts carried out in other regions, including in the United States.

In terms of their worldview and ideology, the two enterprises are close. Both see Islam under threat by hostile forces primarily in the West. They share a fundamentalist or Salafist interpretation of the faith. They share the same notion that jihad means primarily an armed struggle, not merely a spiritual quest, and that it is the collective and individual duty of all Muslims to participate in or directly contribute to the armed struggle. Both Al Qaeda and ISIS see themselves as global movements with global ambitions. Both reject the tenets of the current international order and see the conflict between Muslims and “crusaders” as one that began centuries ago and that will continue to Judgment Day.

Still, there are some doctrinal differences. Al Qaeda's leaders (and most Muslim scholars) reject ISIS's declaration of the caliphate. ISIS takes a harder line on Shia, focusing a large share of its attacks on Shia mosques and other targets. Al Qaeda has taken a more ecumenical line, arguing that Muslim attacks on Muslims, even those following what it regarded as deviant paths, would alienate followers and distract from the campaign against the infidels.

While Al Qaeda's leaders have expressed territorial ambitions, like driving Westerners out of Saudi Arabia and ridding Palestine of crusaders and Zionists, the group has largely operated out of sanctuaries, rather than seeking to seize and hold territory.

ISIS's leaders, on the other hand, see themselves as presiding over an Islamic State, which, as its name implies, is a physical, territorial expression. ISIS conquers, controls, governs, and even runs an economy, something Al Qaeda did not try to do.

The duel for supremacy is really a competition for support, alliances with like-minded groups and the loyalty of fighters, both in the region and afar. ISIS appears to be attracting a larger and younger audience, which reflects its superior use of online resources. Part of ISIS's recruiting appeal also lies in its advertisement of atrocities, but there are weaknesses in this, including a faddish quality, which fickle youth might quickly abandon.

Al Qaeda, meanwhile, has been less able to receive new fighters in great numbers since its training camps were dispersed after 9/11. Geographic convenience and ease of access enabled ISIS to attract an estimated 30,000 foreign fighters to its ranks, including 5,000 from Western countries. Still, Al Qaeda has hardly given up its global terrorist campaign, continuing to provide encouragement, training and assistance to foreign volunteers planning to carry out terrorist attacks.

To maintain the allegiance of their followers, both Al Qaeda and ISIS must remain violent and active. Terrorists attacking in their home countries have pledged allegiance to both groups.

The November terrorist attack on a Paris night club appears to be the work of a group of French fighters serving with ISIS. The attack on the offices of the French newspaper Charlie Hebdo in January, 2015, was carried out by brothers who had declared their loyalty to Al Qaeda, while their comrade who simultaneously attacked a Kosher supermarket in Paris, claimed his operation to be on behalf of ISIS.

Syed Farouk, who attacked the San Bernardino Regional Center in December, began plotting terrorist attacks in 2011, well before the emergence of ISIS. However, his wife Tashfeen Malik, who participated in the attack, declared her loyalty to ISIS.

While Al Qaeda and ISIS clearly have a lot in common, there are serious differences standing in the way of an early merger between the two giants of jihad. It could take a change in leadership of both groups and perhaps some compromises on mission and strategy, but there are enough points of confluence to make a united jihadist front a realistic and frightening possibility.

Brian Michael Jenkins is senior adviser to the president of the nonprofit RAND Corporation and the author of How the Current Conflicts Are Shaping the Future of Syria and Iraq.

This commentary originally appeared on Fox News Channel on March 14, 2016. Commentary gives RAND researchers a platform to convey insights based on their professional expertise and often on their peer-reviewed research and analysis.