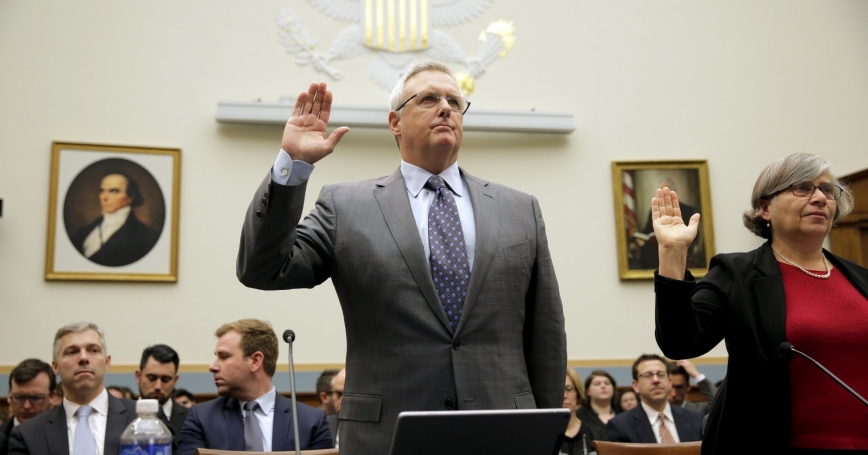 Bruce Sewell, senior vice president and general counsel for Apple Inc., is sworn in before testifying to the House Judiciary hearing on "The Encryption Tightrope: Balancing Americans' Security and Privacy" March 1, 2016

Technology innovates and disrupts, while public policy regulates and controls — at least according to conventional wisdom. The skirmish between Apple and the FBI is a prime example: Apple is refusing to allow policy to dictate how encryption should be included in products. It's nearly impossible to ponder emerging resource-sharing technologies like Uber or Airbnb without thinking of the restrictive public policies — such as limiting ridesharing access at the airport — that often accompany them.

Viewing technology as disruptor and public policy as regulator is such a trope that the concept has seeped into pop culture. On HBO, the series “Silicon Valley” pokes fun with comedic overuse of the phrase “disrupt,” while another satirical sitcom, “Veep,” parodies Washington's dependence on regulation, red tape and lobbying.

Yet the relationship between the worlds of commercial technology (ruled by the “geeks”) and public policy (land of the “wonks”) is more nuanced than conventional wisdom would have you believe. In many ways, the two complement each other. For example, public policy can foster the growth of emerging technologies and the companies that work on them. Federal funding allowed for the incubation and growth of the Internet, artificial intelligence, GPS and many other foundational technologies.

Technology is increasingly an important part of the workplace and today's society. Jobs in computer and information technology are projected to see above-average growth over the next decade, and most major job sectors (such as education, entertainment, medical and transportation) have massive technological components.

The rapid pace of technology has enormous implications for those in both the public policy and commercial tech worlds: Policymakers need to shape intelligent integration of promising technology solutions, and commercial technology companies will want to reap the most benefit from these vast and burgeoning markets. For this to occur, tech geeks and policy wonks need to shed the hackneyed “disruptors versus regulators” paradigm and focus on the ways they can work together.

Those who work at tech startups often feel that public policies are often simply a bad fit, according to people we've spoken with in the field. CEOs and founders of startups in commercial tech — as well as the venture capitalists that fund them — repeatedly told us that policies can be unclear, poorly informed and poorly written, woefully outdated or established with seemingly little forethought about secondary and tertiary effects.

To improve upon or prevent these perceived shortcomings, proposed policy should take into account potential unintended consequences and build in periodic checks to assess whether the policies are working as intended. To do this, policymakers must seek and include the perspectives of technology experts throughout the policymaking process.

Policymakers need to work closely with commercial technology companies and representatives who are creating and innovating new solutions that have public policy implications. This means including startups in the conversation from the beginning — not just the large corporations. But for tech startups, policy interactions tend to be the exception rather than the rule.

By nature, technology innovations are speedy and agile … while slow-and-steady public policy is often doomed to play catch-up.

Such interactions are generally limited to companies that recognize early on that policy and regulation play a big role in their sector or product or to technologists who have a passion for public policy. Examples of successful interaction between startups and policymakers include drone manufacturer Matternet, telecommunication services company CallFire and car-sharing company Getaround. In each of these cases, key personnel made it a priority to interact with policymakers.

Technologists need better and more frequent cross-pollination with those in public policy, starting in the classroom. In business school, aspiring entrepreneurs should be encouraged to take introductory public policy classes. Tech startups should look favorably on job candidates with an interest or experience in public policy. Tech companies of all sizes should become involved in policy-oriented circles within their sector to share information about the policies and agencies that impact them.

Science, technology, engineering and math students — and early-career scientists — should take advantage of public policy learning opportunities available through programs like the Science and Technology Policy Fellowships of the American Association for the Advancement of Science. Seasoned entrepreneurs should consider becoming instructors at public policy institutions.

And technology leaders should think about following in the footsteps of individuals like entrepreneur and big data maven Todd Park, who served in the White House as the U.S. Chief Technology Officer from 2012 to 2014 focusing on how technology policy, data and innovation could advance the nation's future, or his successor Megan Smith, formerly vice president of the Google[x] innovation lab.

Entrepreneurs also should look for opportunities to break barriers by serving on a policy council or board as a technology expert. One high-profile example of this is Steve Bellovin, a Columbia University science professor who was recently appointed the first technology scholar on the Privacy and Civil Liberties Oversight Board, an independent agency within the executive branch that advises the president and other senior executive branch officials. By making such moves, tech players can help policymakers create informed policy that is more in tune with technology.

Of course, there are some inherent challenges. By nature, technology innovations are speedy and agile, often evolving overnight in a garage, while slow-and-steady public policy is often doomed to play catch-up. Collaboration between the tech and policy worlds could result in some creative workarounds to this speed mismatch between technology and policy. For example, pilot projects could allow small-scale implementation of new technologies.

And many in the startup universe complain that public policy is a game for the rich and connected — startups and smaller tech companies simply don't have the resources to compete with larger, more established corporations that can afford the time and money required to make a splash in Washington.

While not everyone can afford to make large donations to political candidates, hire expensive lobbyists or house their own policy shop, anyone can become educated regarding how the world of public policy works and be open to engaging with policymakers when opportunities arise. When geeks and wonks reach across the divide, both policies and products will benefit.

Lillian Ablon is a cybersecurity and emerging technologies researcher and Andrea Golay is a senior project associate at the nonprofit, nonpartisan RAND Corporation.

This commentary originally appeared on TechCrunch on March 17, 2016. Commentary gives RAND researchers a platform to convey insights based on their professional expertise and often on their peer-reviewed research and analysis.