Rouhani and Khamenei Are Both Winners in Iran's Elections 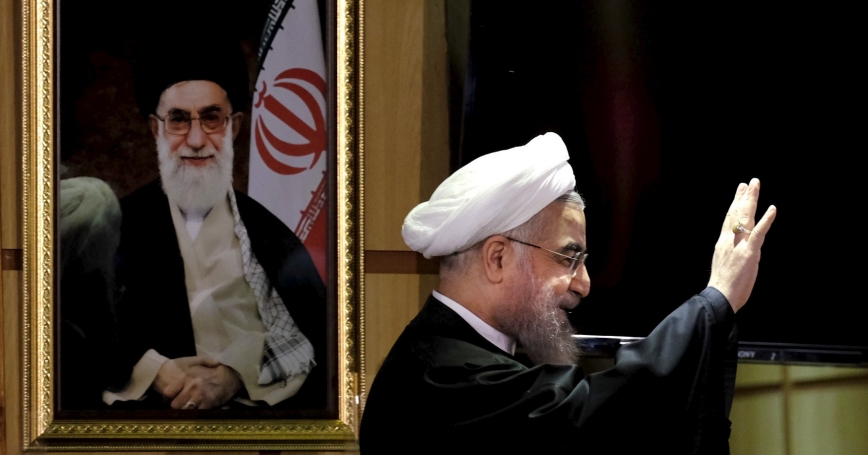 Iranian President Hassan Rouhani waves next to a portrait of Iran's Supreme Leader Ayatollah Ali Khamenei at the Interior Ministry in Tehran, December 21, 2015

Iran's recent parliamentary and Assembly of Experts elections are being heralded as major wins for Iran's long-struggling “moderates.” Moreover, it appears that President Hassan Rouhani has received a popular endorsement for his nuclear agreement with world powers and the lifting of crippling economic sanctions. But Rouhani and Iranian “moderates” are not the only winners in these elections. The conservative political establishment, especially Supreme Leader Ayatollah Ali Khamenei, are also winners, despite the reported reduction in the number of conservatives in parliament and the Assembly. The election has boosted the Islamic Republic's claims to legitimacy and brought more technocratic figures into government while allowing most Iranians to vent a bit of their frustration into the electoral system. So far, Rouhani and his allies have not indicated a desire for earth-shattering changes in Iran. Rouhani, despite some policy differences with Khamenei, appears to work well with the Supreme Leader and the broader establishment. Thus, the elections are unlikely to lead to major changes long sought by Washington or Iran's anxious neighbors.

Khamenei insisted that all Iranians vote in the latest elections, even those who did not necessarily endorse the establishment's conservative Islamist policies. Iranians in Tehran and other cities appeared to have eagerly participated in large numbers, with voter turnout reported at 60 percent. A large voter turnout eases Khamenei's fear of his regime losing legitimacy in the face of economic malaise and popular dissatisfaction. Khamenei's concerns are framed by the massive 2009 Green uprising that shook the Iranian regime to its core. Rouhani's presidency, the nuclear agreement, a slight improvement in the economy, and Iran's reduced international isolation and improved regional position have made the regime much more stable since 2009. And the recent elections add to this momentum.

The elections are unlikely to lead to major changes long sought by Washington or Iran's anxious neighbors.

It appears that the conservatives have lost their majority in parliament and the Assembly of Experts. But their loss may ultimately be beneficial for the regime. Rouhani's supporters are mostly middle of the road technocrats, and not true political reformists, most of whom were disqualified by the Guardian Council before the elections. And while the Assembly of Experts is constitutionally responsible for appointing the next Leader, in reality the decision is likely to be made by Khamenei and his supporters. After all, Khamenei himself was chosen by his predecessor, Ayatollah Ruhollah Khomeini, in 1989; the Assembly merely rubber-stamped his selection.

Rouhani and his political ally, former president Ayatollah Ali Akbar Rafsanjani, may now have a greater role in the succession to Khamenei, but their role is by no means definitive. Moreover, with the new elections, prominent figures associated with former president Mahmoud Ahmadinejad, such as Ayatollah Mesbah Yazdi, are no longer official members of the government. Mesbah Yazdi was once considered to be a major ally of the troublesome Ahmadinejad; he is of little use or threat to Khamenei now that Ahmadinejad is out of the scene and his allies mostly pushed out of the political system.

Rouhani and Khamenei do not agree on all issues. Iran's president has advocated a less restrictive government role in cultural affairs and appears more eager to establish better ties with the United States. But on the whole, Rouhani has done much to stabilize Iran; his nuclear agreement had the blessing of Khamenei (but with much public equivocation), and a limited economic opening of Iran will also benefit Khamenei and his supporters. This does not preclude future conflict between the so-called moderates and the conservatives. But ultimately, Khamenei and Rouhani are not so much rivals as competitive peers. Khamenei does not rule over an absolutist system; although Iran's highest authority, he must nevertheless bend to the wind in order to preserve the regime. The Ahmadinejad presidency, the 2009 uprising, and nuclear crisis had tipped the scales of regime stability. Khamenei and Rouhani have introduced a new balance. Their ability to preserve the balance in the face of numerous domestic challenges and regional discord remains to be seen.

This commentary originally appeared on Foreign Policy Concepts on March 2, 2016. Commentary gives RAND researchers a platform to convey insights based on their professional expertise and often on their peer-reviewed research and analysis.