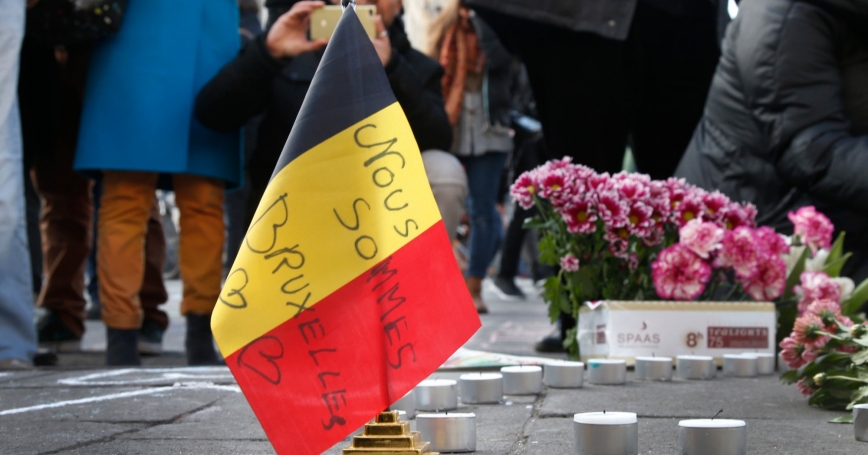 Explosions at the international airport in Brussels and another blast at a metro station killed more than 30 people this morning and wounded hundreds more. ISIS has claimed responsibility for the bloodshed, and the city is on lockdown for the second time in less than four months.

The attack comes after Salah Abdeslam, thought to be responsible for the logistics of the November terror attacks in Paris, was apprehended in the Molenbeek area of Brussels on Friday.

It was a matter of when, not if, the next terror attack would strike #Belgium. Sleeper cells likely activated after arrest of #SalahAbdeslam

If the timing of the attack was indeed connected to Abdeslam's capture, the speed with which it came together is alarming, said RAND's Rebecca Zimmerman.

Initial #Brussels thoughts: if truly tied to arrest, demonstrates how quickly planning can turn to action - 4 days is pretty fast.

Abdeslam's capture may give authorities a window into the ISIS network in Europe. But in conjunction with today's deadly bombings, the fact that he was able to evade authorities for months after the Paris attacks demonstrates the scope of the jihadist support network in Belgium, said Clarke.

The last time Brussels was in lockdown, RAND Europe's Ines von Behr and Sonja Thebes explained the dynamics that make the region a hotbed for those plotting attacks on Europe.

“To understand Molenbeek, it is necessary to look more closely at the broader political and cultural context of a country that is often described in the media as a 'failed state.'

“With its differing and conflicting national heritage … Belgium is layered with several levels and units of administration, often with parallel functions. As a result, the country needs to cater to a public that speaks several languages … resulting in a lack of a central administration.

“The Brussels region alone is home to 19 mayors and municipalities in a capital for 1.2 million inhabitants. The six different police authorities must answer to 19 municipalities, often through an outdated system that makes efficient communication and coordination almost impossible. Each of the local municipalities is responsible for the handling of local government level duties, such as law enforcement, but there is no centralized agency to put the puzzle together.

“Such an environment creates a vacuum that is all too easily exploited by radicals and extremists.”

According to RAND's Brian Michael Jenkins, the Brussels attack shows that Europe is dealing with a different threat than the one facing the United States, where attackers have mostly been so-called “lone wolves.” This also explains the importance of logistics specialists like Abdeslam in conducting attacks on European soil, he said.

“The big difference between [the United States] and Europe and what has made Europe so dangerous is they have a far larger number of returning foreign fighters from Syria, and [the terrorists], more importantly, have a logistical support network in place.

“These fighters come back home determined to carry out an attack. But they need a place to hide, someone to build bombs, someone to supply weapons—they need a network.

“In the U.S., by contrast, we are seeing very little connectivity. We are seeing a single individual or autonomous action. They don't have a terrorist underground here to turn to logistically.”

Compounding the tragic news out of Brussels is the fact that Belgium is not the only country ravaged by recent acts of terrorism. Experts also lamented the geographic range and tempo of recent attacks:

#Istanbul on Saturday, #Bamako on Monday, #Brussels on Tuesday. The pace of attacks is sickening.

#ISIL attack in #Brussels and #AQIM attack in #Mali - together say a lot about terrorism today. AQ barely made news outside Africa.

Follow our experts on Twitter and stay tuned to The RAND Blog for more insights on the Brussels attacks.