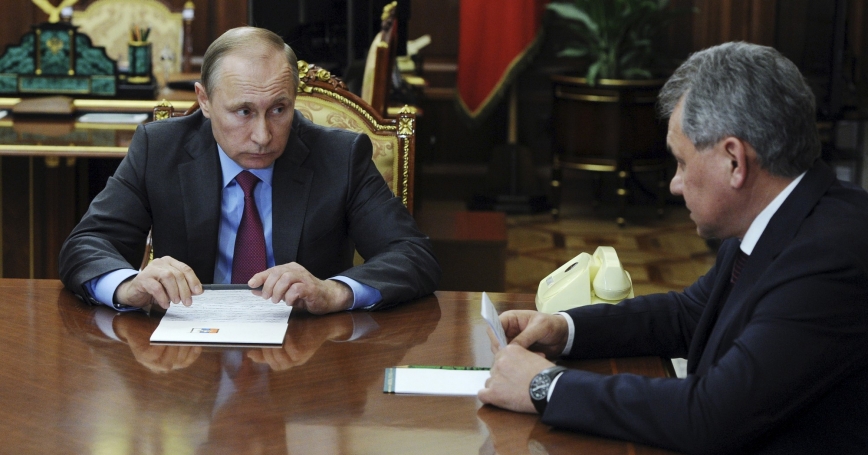 Russia's drawdown in Syria comes in the wake of frustrations with the regime of President Bashar Assad, whose forces Russian airpower aided, and with Moscow's interest in being part of a wider political solution. A negotiated deal will need active support from Russia, the West and regional states, and thus must reflect their interests.

The crisis in Syria, a longtime Moscow client, has brought Russia more risk than opportunity. Since the overwhelming majority of the over 10 million Muslims in Russia are Sunni, the Kremlin runs risks siding with the Shiite-aligned Assad regime and its Iranian and Hezbollah Shiite allies in the fight against Sunni insurgents. Moscow saw its intervention as necessary to rescue Assad's reeling forces and as a way to demonstrate Russian military power.

Then the Kremlin had to rebuke Assad. As the partial ceasefire was getting underway in mid-February, Russia's ambassador to the United Nations was asked about Assad's statement that Syria would continue the fight to defeat all rebels. The ambassador said it did "not chime with the diplomatic efforts that Russia is undertaking."

Russia's frustrations are not unexpected. Former presidents Hamid Karzai in Afghanistan and Nouri al-Maliki in Iraq showed how weak and unpredictable leaders undermine outsiders' ability to help end conflicts and stabilize societies. Moscow may also see a parallel to Afghanistan in the 1980s, when it struggled to prop up an illegitimate regime resisting a determined insurgency.

In announcing the drawdown, President Vladimir Putin claimed that the task of Russian forces had “on the whole, been fulfilled.” This is less than true. Last September at the United Nations General Assembly, he called the Islamic State group “more than dangerous,” but Russia has done little to counter it. The Islamic State group, which controls a wide swath in Syria, has been a destination for several thousand radical jihadists from Russia. Some will return home battle-hardened and spoiling to avenge what they consider to be mistreatment of Muslims in such areas as the North Caucasus.

As well, the al-Nusra Front — like the Islamic State group, not a party to the ceasefire — controls critical territory in Syria, including in eastern Aleppo. Although Russian strikes damaged several insurgent groups, including some backed by the West, the insurgents retain military capability, and some are supported from neighboring countries. Finally, large-scale civilian casualties caused by unguided bombs have damaged Russia's international prestige.

These problems along with economic weakness at home, isolation from the West and confrontation with Ukraine and Turkey have taken a toll on Russia. It is in strategic decline, and a drawdown in Syria might help abate it.

While Russian military intervention may have prevented the immediate collapse of the Assad regime, Moscow's strategic interest is not Assad but retention of a strong and friendly government in populated western Syria. If Russia were able to insert a more effective strongman, it might be tempted. Moscow doubts that the Western goal of a democratic transition is achievable anytime soon.

Recognizing that the Syrian conflict is too daunting for any one outside power to solve and too important for regional powers to ignore, the Kremlin has pressed Assad to pursue a political settlement. He has resisted. By making known that the drawdown would begin a day after the announcement, Putin showed his displeasure.

Russia may be willing to work more intensively in the International Syria Support Group to pressure Syria and its Iranian ally to abide by the cease-fire and seek a political solution. Moscow might hope to build on cooperative habits from the negotiations with the six world powers and Iran that led to the nuclear deal. In the Syria talks, the Kremlin will count on the West and regional powers to bring added leverage, so that Moscow is not too exposed. It was uneasy about pressuring Tehran in the nuclear talks format and will be uncomfortable squeezing Damascus in front of others.

Absent a peace accord, Russia may fear it could again be dragged into Syria if its only Arab ally gets in trouble. To hedge against this risk and further its great power ambition, Russia will have an interest in maintaining military basing infrastructure in Syria. This would also help it project modernized naval and air power in the Mediterranean region.

In seeking a negotiated peace in Syria, the West ought to be ready to accommodate Russia's minimum strategic interests there if Russia ceases attacking Western-backed moderate insurgents and presses the Assad regime to negotiate a political solution and not violate cease-fire arrangements. Effective and enduring political settlements result from quid pro quos, not irrational pursuit of one-sided advantage. Recognizing that contending parties have legitimate interests in the complex Syria conflict could help bring an end to a destructive war in a volatile but vital region.

Colin P. Clarke is an associate political scientist at the nonprofit, nonpartisan RAND Corporation. William Courtney is an adjunct senior fellow at RAND and was U.S. ambassador to Kazakhstan and Georgia.

This commentary originally appeared on U.S. News & World Report on March 17, 2016. Commentary gives RAND researchers a platform to convey insights based on their professional expertise and often on their peer-reviewed research and analysis.