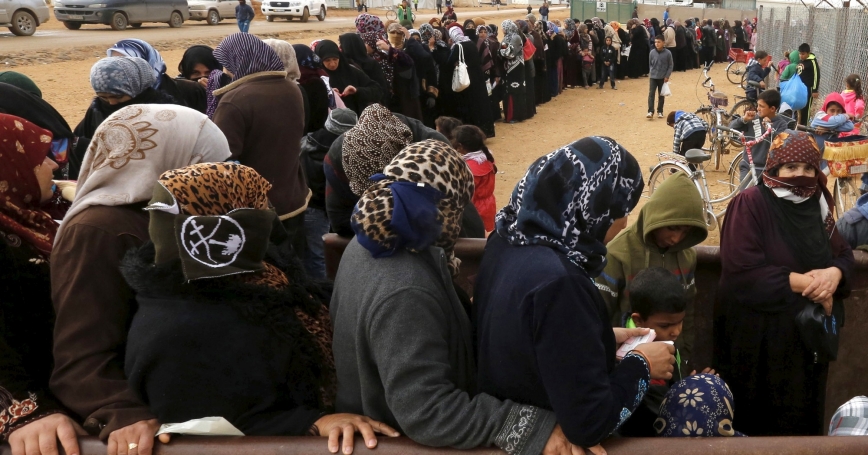 Syrian refugees stand in line as they wait for aid packages at Al Zaatari refugee camp in Mafraq, Jordan, January 20, 2016

Samira stands looking diligently at the camera. At six years old, she is being enrolled in the first countrywide implementation of biometrics by the United Nations High Commissioner for Refugees. Samira caught my eye because she is not a MAM — a military aged male — like the hundreds of Iraqis and Afghans I helped enroll in the U.S. military's biometric efforts in those countries after 9/11.

Biometrics are measurable human signatures that include a heartbeat, the shape of your ear, the way you walk. But when it comes to security measures, biometrics like fingerprints or iris recognition are more heavily used because of their uniqueness. It's easier to distinguish someone by an iris — the colored part of the eye — rather than, say, data from the person's Fitbit. By 2005, the U.S. military was using biometrics in Operation Iraqi Freedom and later employed them in Operation Enduring Freedom in Afghanistan to help ensure those given access to U.S. military installations weren't known criminals or bomb-makers, and to help isolate known insurgents from the local populace....

Sarah Soliman led U.S. Special Operations Command's first Identity Operations team in Afghanistan, as chronicled in the book “All the Ways We Kill and Die.” She is an Emerging Technology Trends Project Associate at the nonprofit, nonpartisan RAND Corporation and is pursuing her doctorate through King's College London's Department of War Studies.

This commentary originally appeared on War on the Rocks on March 9, 2016. Commentary gives RAND researchers a platform to convey insights based on their professional expertise and often on their peer-reviewed research and analysis.