Tunisia's Role in Fight Against Terrorism Discussed at RAND Conference 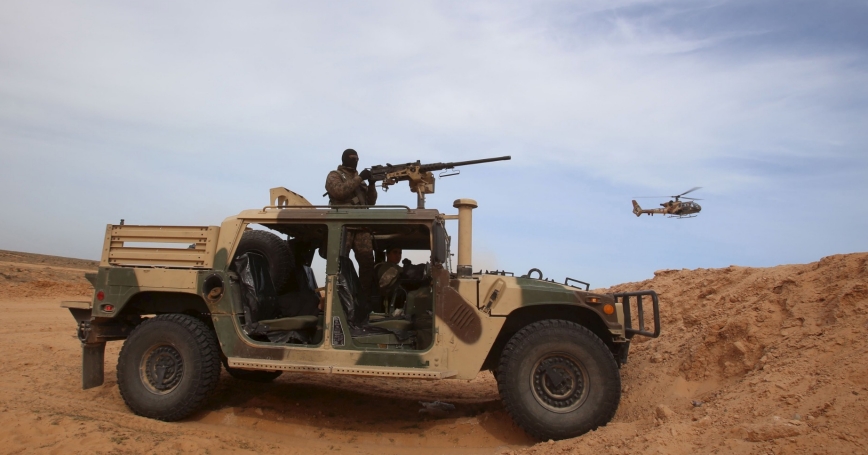 A Tunisian soldier holds his position during an exercise along the frontier with Libya in Sabkeht Alyun, Tunisia February 6, 2016

The fight against terrorism in Tunisia is a shared priority and responsibility with the U.S. and Europe but will also depend greatly on solving the security issues in neighboring Libya, according to participants at a conference March 23 in the RAND Corporation's Washington office.

The conference brought together a broad audience of representatives from the Tunisian and U.S. governments, think tanks, non-governmental organizations, civil society institutions, and academics.

“The security challenges are daunting, combining the challenge of ISIL in Libya with potential instability in Algeria and a depressingly serious domestic radicalization problem,” said Christopher Chivvis, Associate Director of the International Security and Defense Policy Center at RAND, which organized the conference. “To succeed against these challenges, Tunisia will need a significant amount of support from the United States and the European Union.”

Panelists noted the significant internal obstacles to stability in the country. “The single most important issue is that official channels for getting things done and economic transactions are fundamentally broken in Tunisia,” one participant concluded. “The size of the unofficial economy exceeds the official economy.”

“The bottom line is that Tunisian soldiers or police officers must be better trained and equipped than the terrorists themselves,” remarked another panelist during a during a discussion of defense priorities and border security.

On the construction of a wall on the Libyan border, another panelist said: “It's a good start, but not a panacea. Securing Tunisia's border is essential, but requires a layered system, and the wall just isn't enough.” Another important element will be reforms in the Ministry of Interior, as well as beefing up parliamentary oversight of the security sector in general, panelists said.

Tunisia still represents an important opportunity for the U.S. to show the world that a liberal democracy with strong representative institutions is the solution to the long-term challenge of radicalization, panelists said. One said the country represents a unique opportunity for the U.S., with “very high interest in Congress for engaging with foreign parliaments, particularly where members feel they can make a real difference.”

“Tunisia remains a key regional partner for the United States, an emerging democracy, and a frontline state in the global war against ISIS,” Chivvis said in closing remarks. “But the U.S. and Europe must redouble their efforts to bolster it against the challenges it faces – or risk strategic failure in their regional security and democratization objectives.”