What It Was Like Being in Brussels During the Terrorist Attacks 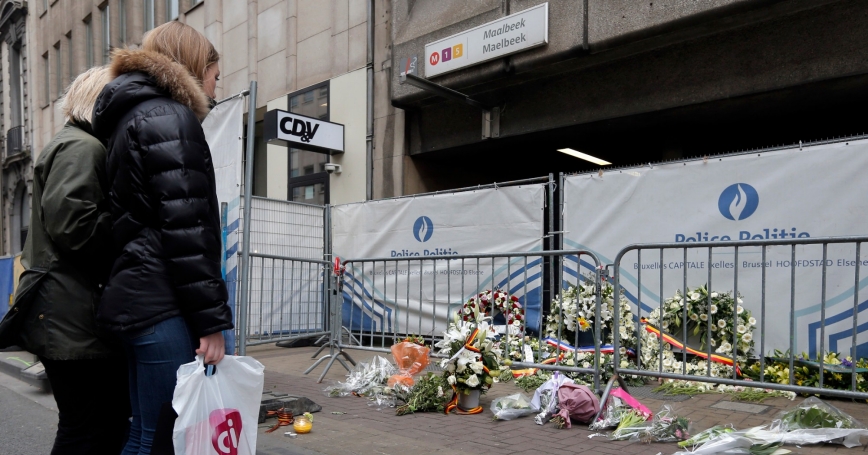 Even though I work in an office where the study of terrorism and (de)radicalization is a daily pursuit, bearing witness to a terrorist attack was a startling and surreal experience, one that tragically drove home the need for an expanded knowledge base on terrorism and radicalization.

Most mornings I take the metro for a few stops and get off at Maelbeek station, a few steps from the Brussels office of RAND Europe. But it was a rare sunny morning in Brussels, so I decided to walk to work. Immediately after hearing about the explosions at Brussels-Zaventem Airport, I started making phone calls and sending text messages as I tried to make sure that none of our staff had been caught up in the attack. After one mentioned rumors of more attacks close to the metro stations in the European quarter, a peek out the front door of our building confirmed the disturbing news.

Smoke fumes rose out of the Maelbeek metro station entrance. Police cars had pulled over in the usual chaos on Rue de la Loi, a main artery through Brussels, and officers were frantically trying to divert traffic. A handful of first-aiders took care of the wounded on the sidewalk. Staff from the nearby Thon Hotel handed out towels to cleanse and bind wounds. In the distance, the lights of dozens of firetrucks and ambulances could be seen as they tried to make their way through the heavy traffic.

While the wounded were taken to the Thon Hotel, masked and armed police officers ordered bystanders to go back inside their offices. For hours, it was unclear whether our staff should evacuate the building or remain inside. We stayed.

Around 3 p.m., we were told to remain in the backside of the building — a suspicious item had been found in a bin.

The pressure on Belgium security forces was palpable. There was a clinch of nervousness among the young police officers who secured the area around the Maelbeek metro. After all, over the last months Belgian security forces have been criticized from within Belgium and beyond, demanding a change in the efficiency of the many-layered federal state system. Prime Minister Charles Michel confirmed at a press conference, "We dreaded an attack, and it has come".

In the late afternoon, we were finally allowed to leave our building. We left, but a feeling of dismay went with us. We were, and are, grieving for the victims and their families, many of whom work — or worked — nearby.

Since public transport was shut down, this time I had to walk. It was still sunny, but the atmosphere had completely changed. Thousands of office workers were quietly trying to make their way on foot home or to a railway station on the outskirts of the city. It was an oddly uncomfortable stroll through a city that had held its collective breath for months, worrying that something might happen but not knowing when. Military vehicles scattered around the city. Police sirens were everywhere. Masked officers patrolled with their fingers at the triggers.

In the months following the Paris attacks, Belgian intelligence and security were unable to track Salah Abdeslam — believed to be the sole surviving participant of the Paris attacks — and his aides, who had sought shelter in Molenbeek, the very neighborhood where Abdeslam grew up. The sense of frustration among the general public about the perceived effectiveness of, and coordination among, the Belgian intelligence and security authorities is even more prevalent now.

The need for greater coordination when countering terrorism in European cities is a bit of an open door. But Belgium's cumbersome federal governance system, its language conflict in combination with suboptimal international cooperation, make the country a special case in point. Belgium remains a deeply fragmented country. Brussels has six police districts; the city has 19 municipalities but is also ruled by a capital region (state) and a federal government. My colleagues have repeatedly said that partnerships within all levels of national government, law enforcement agencies, the private sector, communities and event international agencies should be a starting point for any counterterrorism strategy.

In addition, Belgium is a country with per capita the highest number of foreign rebel fighters traveling to Syria (460 combatants with around 130 returnees, and a third of them in jail, as of January 2016). As my colleagues Ines von Behr and Sonja Thebes described in a recent blog post, many radicals from Belgium originate from rough neighborhoods with high unemployment rates where they face social exclusion. Neighborhoods within Brussels, such as Schaerbeek and Molenbeek, appear to be particularly problematic. They are described as a breeding ground and even a safe haven for extremists, and security forces are portrayed as being unable to get a handle on the situation in the region. Molenbeek is at the peak of the problem, with unemployment rates around 31 percent, compared to a national unemployment average of 8.5 percent. Increased investment in these areas could be considered as a way to deal with these issues, including community-based initiatives which have been successful in other European countries.

Sadly, little is known about what works when tackling radicalization. My colleagues aim to fill this knowledge gap and assist policymakers and practitioners in establishing an evidence base in countering violent radicalization. This won't be a quick fix. It will require long-term effort to get to the root of the problem.

Near the end of the long day of the attacks, when I finally sat down in a train carriage at the Brussels North Station, my eyes momentarily met those of the man sitting opposite me. No words were exchanged, but there was a mutual sigh and recognition that this was a tragic yet pivotal day for the city and the country. The atmosphere in Brussels was not fearful, but there was a sense of resignation. Things are likely to be different from now on.

Stijn Hoorens is an associate research director of RAND Europe and head of RAND's Brussels office.

This commentary originally appeared on U.S. News & World Report on March 28, 2016. Commentary gives RAND researchers a platform to convey insights based on their professional expertise and often on their peer-reviewed research and analysis.