A Risky Move in Brussels 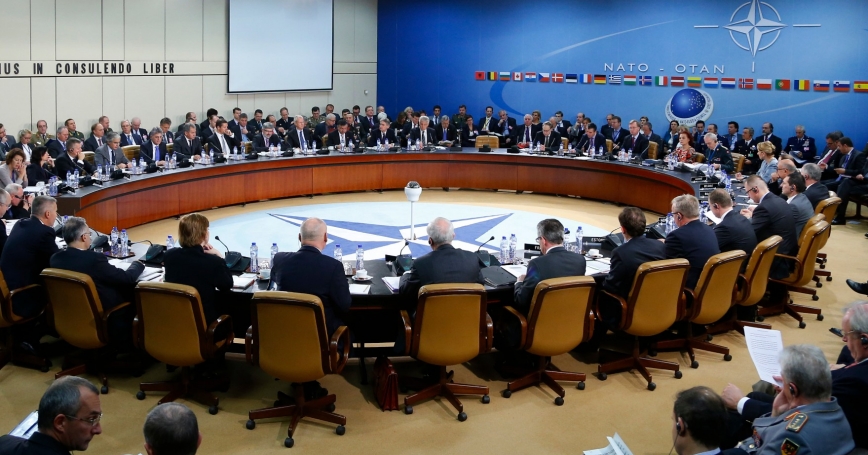 Russia's and NATO's Defence Ministers at a NATO-Russia defence ministers council at the Alliance headquarters in Brussels, October 23, 2013

In these circumstances, the decision to convene a meeting of the NATO-Russia Council in Brussels on April 20 has been met with an unusual amount of controversy — and could prove to be a mistake.

To be sure, there are some strong arguments for improved dialogue between NATO and Moscow. As proponents of engagement rightly point out, Russia plays a key role in ensuring Iran does not acquire nuclear weapons. It could also play an important role in eventually bringing the war in Syria to an end. Russia's aggressive military operations — in the Middle East and Europe — and dangerous harassment of U.S. ships and aircraft have demonstrated the need to work together to prevent military accidents that could dangerously escalate existing tensions.

It's also true that NATO can talk to Moscow while simultaneously building up its defenses against Russia and strengthening Ukraine, Georgia, Moldova, or other NATO partners that Russia seeks to weaken.

Nevertheless, under the current circumstances, very little of value is likely to come out of another meeting between NATO and Russia. What's more, there are real risks. Russia could use the meeting to work against NATO's best interests and try to undermine allied solidarity and resolve on Ukraine and other issues.

The NATO-Russia Council was initially conceived as a way of bringing Russia more closely into Europe's post-Cold War security architecture.

Starting in the mid-1990s, NATO pursued a policy of eastward enlargement, incorporating several former Warsaw Pact and post-Soviet states into its membership over the following decade. Concurrently, the alliance sought to build a closer and more productive relationship with Russia, signing the NATO-Russia Founding Act in 1997 and establishing the NATO-Russia Council in 2002.

The establishment of the council was a practical middle course between those who favored fully incorporating Russia into NATO and those who favored creating a brand new security organization that would include both Russia and all 28 NATO members as equal partners.

In retrospect, however, the creation of the NATO-Russia Council may have been the high water mark in post-Soviet Russia's relations with the West.

Only a year later, Ukraine and Georgia revolted against their undemocratic, Soviet-era leaderships. Russian President Vladimir Putin soon began to reinforce his own position of power, centralizing authority in the Kremlin and prosecuting political rivals on trumped up corruption charges. Putin then began to lament the demise of the Soviet Union and lambasted U.S. and NATO policy in Iraq, Afghanistan, Kosovo, and on missile defense.

In 2008, when NATO heads of state pledged that Georgia and Ukraine would eventually become members of the alliance, Russia invaded Georgia and forced its westward leaning government to its knees.

In the wake of the Russia-Georgia war, both sides attempted to patch up relations. Limited dialogue and practical cooperation resumed in 2009.

The Obama administration announced it would “reset” relations between the erstwhile superpower rivals. A meeting of the heads of state of the NATO-Russia Council in Lisbon in 2010 sought to revitalize the NATO-Russia Council and transform it into a “true strategic partnership”. NATO and Russia then set out to find common ground on issues ranging from Afghanistan, to missile defense, to piracy in the Horn of Africa, to global terrorism.

The intentions during this era were largely good and hopes were high. But the inherent weaknesses of the NATO-Russia Council were clear. Meetings tended to involve set-piece interventions from each of the allies, often followed by blustering and acrimonious displays of distrust and recrimination from the Russian representatives.

Concrete gains remained limited to areas where NATO and Russia not only shared specific interests but also had the ability to conduct specific, small-scale military and peacekeeping operations. Naval operations were often a focus, largely because NATO and Russian forces could cooperate at a distance. Counterterrorism cooperation was far more difficult, because neither side was ready to share the sensitive intelligence needed to catch terrorists.

The council proved largely impotent as a means of promoting larger scale projects for European security, enhancing crisis management, or defanging broader tensions between Russia and the alliance. Because Moscow wrongly views NATO as an organization in which the United States dictates policy, it has tended to place far more value in direct discussions with Washington or key European capitals. Ultimately, it cares little about the NATO-Russia Council beyond the optics.

The same dynamics will be in play again at the meeting tomorrow, the first since 2014. But now, there are no areas for practical cooperation, and Central European allies are even more distrustful of Moscow than they were five years ago.

Meanwhile, Moscow will likely attempt to portray the meeting, particularly at home, as an example of its diplomatic skill — which to a certain degree it will be — and suggest that its relations with Europe are strong despite its belligerence and uncooperative attitude toward ending the conflict in Ukraine. Specifically, it may seek to use the meeting to suggest Europe is weakening its commitment to Ukraine and the sanctions regime imposed on Russia after its invasion of the Donbass in 2014. Those sanctions are currently linked to progress on the 2015 Minsk II Agreement that requires, among other things, an end to hostilities and Ukrainian control over its eastern border. If sanctions weaken without Russian compliance with Minsk II, it will be a clear defeat for the alliance.

Allies should continue to work in a unified and clear-eyed manner for a recovery from the current depths to which Russia's relations with NATO have fallen, while at the same time recognizing that Russia's security relationship with Europe has been problematic for centuries. Dialogue alone is unlikely to effect this reversal and could be counter-productive if mismanaged. Ultimately, it is Russia's political system itself that will need to change if relations are to improve significantly. That is not something that the NATO-Russia Council, or NATO for that matter, can do much about.

This commentary originally appeared on The Cipher Brief on April 19, 2016. Commentary gives RAND researchers a platform to convey insights based on their professional expertise and often on their peer-reviewed research and analysis.