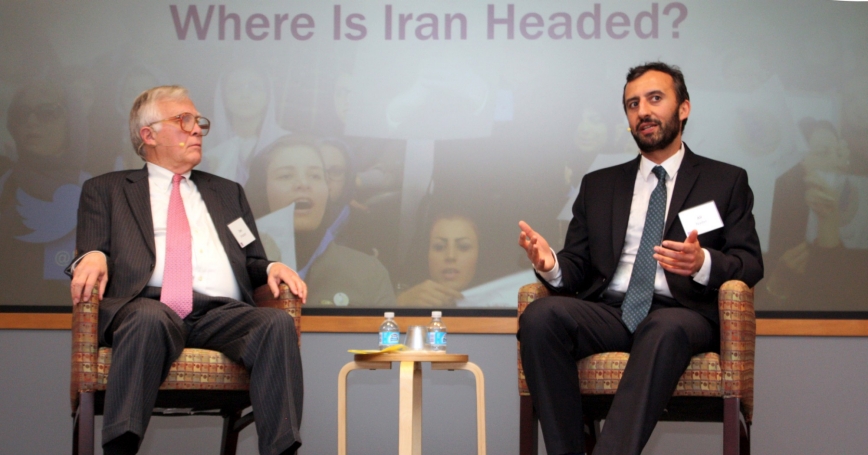 The Iran nuclear deal has been the subject of strong criticism from U.S. presidential candidates, including promises to scrap the agreement in favor of taking a much tougher stance with Iran. But should a president “tear up” the deal on his or her first day in office? What would be the outcome for the United States?

“That's just a horrible idea,” said Alireza Nader, senior international policy analyst at the RAND Corporation, and author of The Days After a Deal With Iran: Continuity and Change in Iranian Foreign Policy.

As part of an ongoing Conversations at RAND series, Nader was joined by Dan Simpson, associate editor of the Pittsburgh Post-Gazette and a former U.S. ambassador, on March 30 at RAND's Pittsburgh office. The series highlights important and timely research activities at RAND.

While the U.S. can't “tear up” an international agreement, also signed by the United Kingdom, France, Germany, Russia, and China, it could stop enforcing the deal, Nader said.

“Hypothetically let's say President X of the United States decides to stop enforcing the agreement,” Nader said, “then Iran technically can say that it can expand the nuclear program, and when the U.S. asks countries like China to enforce new sanctions, they can say, 'Why would we penalize our trading partner when you violated the agreement yourself?'”

The agreement had ended 36 years of estrangement between the United States and a key country in the Middle East, Simpson said, and called it “a very significant achievement.”

Nader called the deal “historic” and said: “This was really the chief issue affecting not only U.S. national security, but international security for the past 10 years, if not more. I wouldn't have thought 2½ years ago that we would be where we are today.”

Since the agreement was signed in July, Iran has shipped 98 percent of its enriched uranium to Russia, dismantled 6,000 centrifuges, reconfigured a heavy water reactor to close the plutonium path to weapons, and agreed to “very intrusive inspections,” Nader said.

Those actions moved Iran from being within a month of nuclear weapons capability when negotiations began, to a year away, should Iran restart the program today. Had the deal not been reached, Nader said, “the U.S. would have had to decide to accept a nuclear-weapons capable Iran, or go to war with Iran.”

The release of $50 billion in Iranian assets—often described by critics as a payment for Iran, but in fact the return of its own money—was a key factor in reaching agreement, Nader said. That money will go into domestic projects, including improving the energy sector and buildings schools, but some could also be spent on defense and support for Iran's regional allies. Release of the funds also reduces the chance of Iran cheating on the agreement, according to Nader. Cheating is “not in its interests, because it wants the economic benefits,” he said.

The deal has political and popular support in Iran, where it has been accepted by the political system in Tehran and widely welcomed by the public.

But the overall economic outlook for Iran is still poor—low oil prices are hampering the recovery, and foreign investment has been slow to materialize. Corruption and red tape are significant barriers to private investment, and while nuclear sanctions have been lifted, primary sanctions in place since the 1980s are still in force, limiting the ability of U.S. companies to engage Iran economically, Nader said.

“It's going to take some time for the potential to be tapped into,” Nader said.

And when the agreement ends in 15 years? The Obama administration has argued future administrations will then have vast insight into Iran's activities, and could respond militarily or through other means, if needed.

“Today we know a lot about Iran's nuclear activities,” Nader said. “In the future we're going to know even more, and some aspects of the program last 20 to 25 years.”