Obama Should Visit Hiroshima and Nagasaki 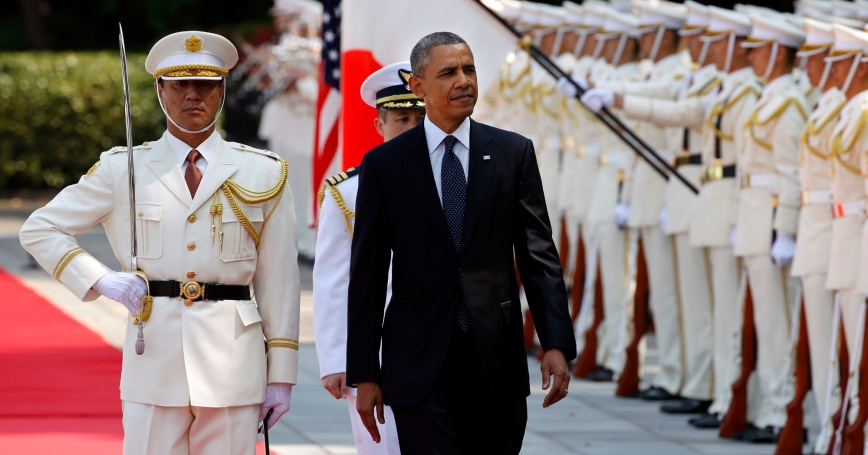 U.S. President Barack Obama reviews an honor guard during a welcoming ceremony at the Imperial Palace in Tokyo, Japan, April 24, 2014

On May 26 and 27, President Barack Obama will join with other leaders from the Group of 7 industrialized nations at a summit hosted by Japanese Prime Minister Shinzo Abe at Ise-shima in Japan's Mie Prefecture.

At the conclusion of that visit, his last to Japan as a sitting president, Obama will have an opportunity to do something no other American president has ever done: visit the first and last cities to suffer atomic bombings.

The prospect that the president might visit Hiroshima and/or Nagasaki has long been debated within U.S. Asia policy circles and is attracting substantial attention and generating great hope in the Japanese media. Advocates argue that it will help build greater momentum in U.S.-Japan ties and draw stark contrasts between non-nuclear Japan and North Korea's illegal nuclear program.

Opponents, meanwhile, worry it might be interpreted as an apology that could stir up feelings of anti-Americanism or even calls for compensation inside Japan. As I recently had the opportunity to visit both Hiroshima (in January 2016) and Nagasaki (in April 2016), I believe that the president should go.

Below are five considerations that have shaped my thinking.

First, no one should argue that an American president could not visit any city where substantial civilian casualties had occurred simply because it might be seen as an apology. American presidents have already visited numerous Japanese cities that experienced firebombing campaigns during World War II resulting in substantial numbers of civilian deaths.

World War II was conducted as a total war in an era prior to the existence of either precision-guided munitions or strong international norms against causing civilian casualties in armed conflict.

Many of Japan's major defense industrial sites were located within or adjacent to major cities, and as a consequence large numbers of Japanese cities were targeted with high explosive, fragmentation and incendiary bombs, often killing large numbers of civilians in the process. Yet no one would argue that Tokyo or other cities where the civilian death toll was substantial should be off-limits to an American president.

Second, as Secretary of State John Kerry's visit to Hiroshima has shown, a visit can be accomplished without being interpreted as an apology, and indeed many Japanese are emphatic that, as strongly as they want President Obama to go, they are not looking for him to issue an apology.

If Obama doesn't visit Hiroshima or Nagasaki, he will miss a historic opportunity that his successors are unlikely to grasp any time soon.

Indeed, for most Japanese, our apologies to each other for the horrors of war have come in how we have treated each other the past 70 years. Indeed, many Japanese regard their neighbors' quests for apologies for past Japanese behavior as politicized or illegitimate and this would make it difficult for them to turn around and demand an apology from the United States (apart from the fact that one would not be forthcoming).

Third, a visit by President Obama to either Hiroshima or Nagasaki, or best of all both, would present an opportunity to invite Prime Minister Abe to Honolulu to lay a wreath at the site of the USS Arizona, at rest on the bottom of Pearl Harbor where it sank after a Japanese sneak attack on the morning of December 7, 1941.

Opening the way for a Japanese leader to pay respects to the 2,403 Americans who died defending their country that fateful morning nearly over 70 years ago would be a fitting rejoinder to an American president's visit to Hiroshima and/or Nagasaki.

Fourth, President Obama has not shied away during his presidency from reaching out to America's adversaries and taking risks to shake up U.S. foreign policy. He has shown his willingness to authorize bold steps, including killing Osama bin Laden and Anwar al-Awlaki; reaching out to improve relations with Venezuela and Cuba; and signing a controversial deal to freeze Iran's nuclear program.

A presidential visit to Hiroshima and Nagasaki is less controversial than these steps and would likely be seen by a leading ally of the United States as a highly symbolic gesture of friendship and healing.

Finally, if President Obama does not go to the two cities, he will miss a historic opportunity that his successors are unlikely to be able to grasp any time soon: Given the possible controversy a visit could generate, no incoming president is likely to make such a trip, meaning it could be years—at the earliest—until the next such opportunity could come up.

The trip would be far more meaningful if it could be accompanied by a meeting with the survivors, who could share their personal stories of war and remembrance. Yet, the youngest survivors of those two fateful days in August 1945 are today 71 years of age, and most are much older; there will be fewer and fewer hibakushas (or “atomic bomb survivors”) alive with every passing year.

In light of the above considerations, the time for such a visit, if it is ever to occur, is clearly upon us now.

Scott W. Harold is the associate director of the RAND Center for Asia Pacific Policy, a political scientist at the nonprofit, nonpartisan RAND Corporation, and a member of the Pardee RAND Graduate School faculty.

This commentary originally appeared on Newsweek on April 28, 2016. Commentary gives RAND researchers a platform to convey insights based on their professional expertise and often on their peer-reviewed research and analysis.