Reimagining and Modernizing U.S. Airborne Forces for the 21st Century 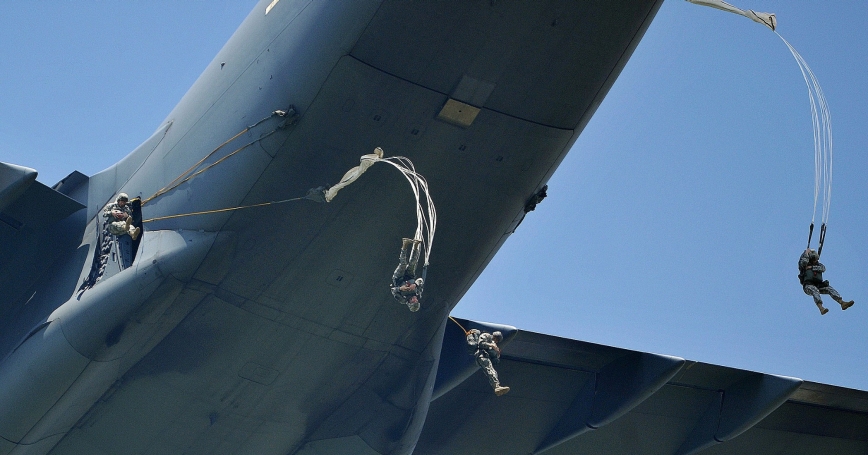 Do we need Army Airborne? This question was raised by Kyle Jahner in the Army Times. This is not a new debate. In fact, it comes up during every period of defense downsizing. In Jahner's article, the usual suspects and arguments are trotted out again: the high costs of maintaining airborne forces, the risks of using them in the face of increasing lethal air defenses, the lack of sufficient deployment aircraft, the lack of jumps much larger than a brigade since World War II, and the assertion that the 75th Ranger Regiment is sufficient for any probable airborne forcible entry operations. We've seen these arguments in longer form in Marc DeVore's thoughtful study, When Failure Thrives: Institutions and the Evolution of Postwar Airborne Forces (PDF). The counters to these arguments are also familiar: The airborne forcible entry capability is a national asset, there is always an airborne brigade in the Global Response Force that can rapidly deploy anywhere in the world on short notice, and paratroopers are “double volunteers” (i.e., for the Army and for airborne training) and, therefore, elite light infantry.

Furthermore, joint doctrine (PDF) envisions only a limited role for airborne and other forcible entry capabilities such as amphibious assault. Their mission is to “seize and hold lodgments” to enable “the continuous landing of troops and materiel possible and provides maneuver space for subsequent operations.”

David E. Johnson is a senior historian and John Gordon IV is a senior policy analyst at the nonprofit, nonpartisan RAND Corporation.

This commentary originally appeared on War on the Rocks on April 20, 2016. Commentary gives RAND researchers a platform to convey insights based on their professional expertise and often on their peer-reviewed research and analysis.