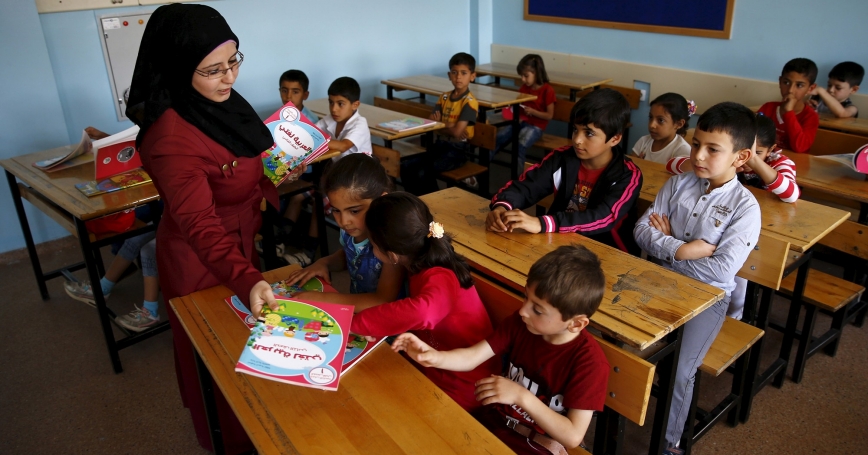 A Syrian refugee teacher distributes books to her refugee students in the Karapurcek district of Ankara, Turkey

Since Syria's civil war began in 2011, half of the country's 23 million people have been displaced; nearly 7 million are displaced within Syria, and nearly 5 million registered Syrian refugees live outside of the country, mainly in Turkey, Lebanon, and Jordan. Approximately 1.5 million Syrian refugees are school-age children. While safe imminently, these children now face a slew of struggles — not the least of which is the lack of education that they need to move forward in life.

I recently visited a school for Syrian refugee children in eastern Turkey. The school's principal, a refugee himself, is a remarkable man. He had been a math teacher in Syria before fleeing across the border with his family after the outbreak of the civil war. When he first arrived in the Turkish village, he noticed that many of the local Syrian children were not enrolled in school and decided to take action. Walking door-to-door throughout all of the nearby villages, he surveyed households and made a list of Syrian children that were, at that time, not attending a formal educational program.

After months of collecting data, the man submitted his findings to the local governor and appealed for the funding needed to provide the Syrian refugee children with education. The Turkish government and the United Nations complied and pledged the financial support necessary to build a prefabricated school. He set up a Facebook page to hire teachers, and even though there was no money for salaries, refugees who were formerly teachers in Syria volunteered to educate the children in their community. I visited the school during its first week of operation and was humbled to see children who were truly excited to be there. They wanted to learn.

This is only one of many stories illustrating the resourcefulness, determination, creativity, and high capacity levels found among Syrian refugees. Traditional refugee responses rely mainly on U.N. agencies and non-governmental organizations to implement programs. But other propitious untapped resources — such as social media and technology companies, other private sector actors, and the refugees themselves — also have the capacity to deliver needed solutions to social problems such as education. Refugee education is one area where these untapped resources stand to make a significant impact.

There are immense challenges to providing education to Syrian refugees, beginning with the sheer enormity of the situation. Half of the 1.5 million refugee children are in school, thanks to the efforts of host governments, the U.N., and non-governmental organizations. Yet 700,000 (PDF) of these children currently do not attend formal school — and have not for several years.

This is in stark contrast to the access afforded to Syrian children in their middle-income homeland prior to the outbreak of the civil war. Because 90 percent of the refugees live in cities, suburbs, villages, and other non-camp settings, efforts to provide access to education cannot be easily concentrated in a single location.

Though these challenges are significant, they are not insurmountable. Our 2015 RAND Corporation study of Syrian refugee education in Turkey, Lebanon, and Jordan offered a number of recommendations for improving access to and quality of education. The report identified strategies that rely on untapped resources in the private sector, other technology or media companies, and the refugees themselves.

The first of such strategies involves creating school spaces. Lebanon and Jordan opened their public schools to Syrian refugees, often accommodating the additional children by instituting second shifts in the school day. In Turkey, UNICEF and the refugees themselves have opened up schools. However, despite these efforts, schools in all host countries are still forced to turn away children due to a lack of space.

One way to create more school spaces is to design inexpensive schools that can be built quickly. These schools could be funded through public-private partnerships, where private firms finance the construction of new school buildings, which are then rented to host governments upon completion. Another strategy is to use distribution mapping and geospatial information systems to identify buildings that could be repurposed as schools within urban locations that suffer from overcrowded classrooms. These information systems could also identify less densely populated schools that can bear additional enrollment. Transportation to distant schools, however, is not always safe for children traveling alone, and it is cost prohibitive to families struggling to rebuild their lives.

Increasing the competency of teachers is also necessary to educating refugee children. To staff new schools and new shifts, administrators quickly hire inexperienced individuals to teach. Those responsible for teaching refugee children, however, must have an exceptional skill set to connect with and instruct their students, who are often traumatized and may have been outside of the school environment for several years. Thus, teachers must be trained to attend to children with additional needs. One possible strategy to do so could potentially involve providing training to teachers online, on smartphones, or via television programming.

The issue of staffing could also be addressed by taking advantage of the many experienced teachers among the Syrian refugees themselves. Donor commitments to pay for teacher salaries and policy changes in Jordan and Lebanon to permit the hiring of Syrians as teachers could easily add to the pool of capability.

Language barriers pose additional challenges to educating Syrian refugees. Because Syrians speak Arabic and Turkey's public schools teach in Turkish, Syrian students cannot easily enter Turkish schools. Although the community of Syrian refugees in Turkey created schools of their own using a version of the Syrian curriculum, the number of schools is insufficient, and such an approach perpetuates segregation between the refugees and their host nation. To address this challenge, effective and inexpensive language training for students and their parents is needed.

Some refugee children have unique learning needs, after having missed several years of school following the outbreak of violence in Syria. Given that extensive gains in physical and emotional maturity occur during each year of childhood, placing refugees into classrooms where the rest of the children are much younger would be disruptive to both the refugee children and host country children. While alternative education programs exist, they are too few in number and not tied to educational pathways that lead to certified degrees. One strategy for addressing this challenge is online education for children who have missed a substantial amount of school. However, many refugees live in crowded conditions and under significant stress, potentially making online learning difficult.

Finally, Syrian families need better access to information about schooling in their host nations. As demonstrated by the principal whose ambitions gave birth to a new school for the children in his community, Syrian refugees have immense potential themselves. Yet, when refugee parents lack access to information about the opportunities related to education for their children (such as schools with available space or nearby NGOs that offer educational support), they have no realistic avenue for helping their children succeed. Although innovative information and data tools were developed for and by aid workers, no such tools exist to communicate with or get information from refugees — despite the fact that many have access to smartphones, television, radio, and sometimes computers. Exploring options for interactive communication with the refugees' parents or guardians would be key.

The U.N. estimates that in protracted refugee crises, the time to return home averages about 25 years — meaning that it will likely be several decades before the Syrians can return to Syria. However, the international community and the Syrian children cannot wait for a resolution to Syria's internal strife, before addressing the large educational gaps that today exist. Medium-term solutions at scale, like those listed above, must be implemented with the knowledge that an investment in education is an investment in the future. Investing in education is important not only for the individuals involved, but also for the sustainable development, economies, and stability of both host countries and Syria in the long-term. Only through such efforts will Syrian refugee children be prepared to be the leaders of the generation to come.

Shelly Culbertson is a policy analyst at the nonprofit, nonpartisan RAND Corporation, and the author of The Fires of Spring: A Post-Arab Spring Journey Through the Tumultuous New Middle East (St. Martin's Press).

This commentary originally appeared on Georgetown Journal of International Affairs on April 18, 2016. Commentary gives RAND researchers a platform to convey insights based on their professional expertise and often on their peer-reviewed research and analysis.